The National Institute of Standards and Technology (NIST) claims in its WTC 7 FAQs that “no blast sounds were heard on audio tracks of video recordings during the collapse of WTC 7 or reported by witnesses.” 1 However, both audio recordings and eyewitness accounts of explosions during the destruction of WTC 7 contradict NIST’s claim.

Although there are not nearly as many eyewitness accounts of explosions in WTC 7 as in WTC 1 and WTC 2, there are a handful of accounts that strongly suggest explosions occurred immediately before and during WTC 7’s destruction. These include: 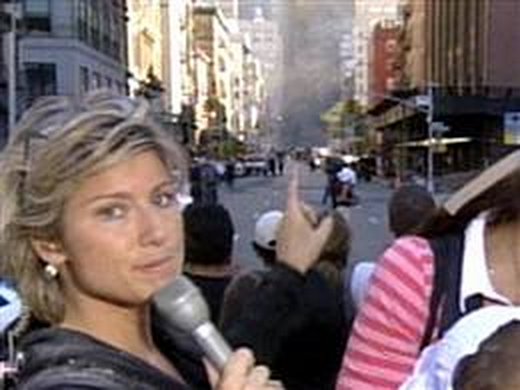 MSNBC reporter Ashleigh Banfield hears a loud sound from several blocks north of WTC 7 and says, “Oh my god.... This is it.”

These eyewitness accounts are corroborated by MSNBC video footage of reporter Ashleigh Banfield several blocks north of WTC 7. In the video, she hears a loud sound, turns her attention to WTC 7, and says, “Oh my god.... This is it.” 5 About seven seconds after she hears the loud sound, WTC 7 collapses. As David Chandler observes in the video WTC 7: Sound Evidence for Explosions:

In addition to eyewitness accounts of explosions at the time of WTC 7’s destruction, there were eye-witness accounts from two men — Michael Hess (Corporation Counsel for the City of New York) and Barry Jennings (Deputy Director of Emergency Services at the New York City Housing Authority) — who reported experiencing an explosion and smoke in a stairway in the northeast part of WTC 7 prior to the collapse of WTC 1 at 10:28 AM.6

It has been claimed that what Hess and Jennings experienced was the result of debris from WTC 1 impacting WTC 7. However, this claim is not plausible, as Hess and Jennings were in a stairway at the opposite end of WTC 7 (northeast) from where debris impacted the building (southwest), and their account indicates that the explosion and smoke they witnessed occurred before the collapse of WTC 1.7

[1] NIST: Questions and Answers about the NIST WTC 7 Investigation, Question #13.