The report issued by the National Institute of Standards and Technology (NIST) on the destruction of WTC 1 and WTC 2 was voluminous, yet NIST did not analyze what is arguably the most important aspect of the collapses for establishing their likely technical cause: the structural behavior of the towers during the collapse. Instead, NIST carried its analysis only to the point of what it called “collapse initiation.”

As a result of stopping its analysis at collapse initiation, NIST’s final report provides virtually no explanation for the most relevant body of evidence. The very limited explanations NIST does provide come mainly from its FAQs webpage and are speculative rather than based upon scientific analysis.

One of the most noticeable features of the Twin Towers’ destruction was the near-total pulverization of their concrete flooring. New York Governor George Pataki provided this account:

“There’s no concrete. There’s very little concrete. All you see is aluminum and steel. The concrete was pulverized. And I was down here on Tuesday, and it was like you were on a foreign planet. All over lower Manhattan — not just this site — from river to river, there was dust, powder two, three inches thick. The concrete was just pulverized.” 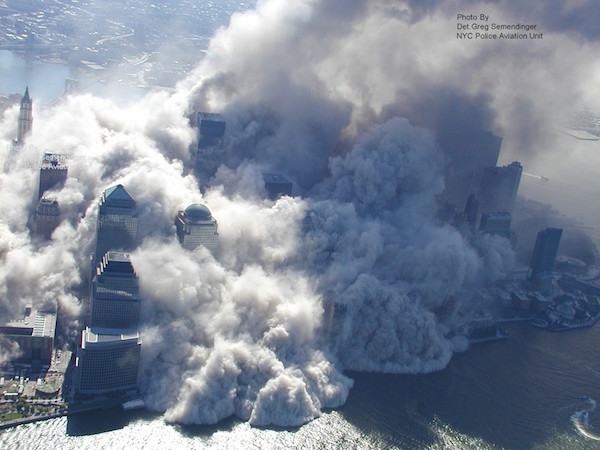 In addition, the buildings’ steel structures were almost entirely dismembered. Aside from some of the exterior walls at the base of each building still standing, virtually all of their steel skeletons were broken up into small pieces, with the core structures separated into individual members and the exterior columns broken up into three-story, prefabricated sections. 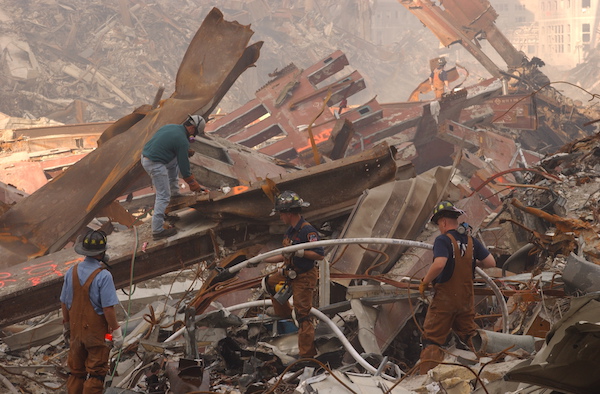 Debris from the dismembered structures of WTC 1 and WTC 2.

What can explain the near-total pulverization of approximately 8.8 million square feet of 5.5-inch-thick lightweight concrete flooring and the near-total dismemberment of 220 stories of steel structure? NIST provides no explanation, and gravity alone appears to be implausible. A simple analysis of the approximate amount of energy required to pulverize the concrete and dismember the steel structures indicates that about 1,255 gigajoules of energy would have been required, far exceeding the estimated 508 gigajoules of gravitational potential energy contained in the buildings.1

The near-total pulverization and dismemberment of the structures becomes even more difficult to explain when we consider that the collapses occurred “essentially in free fall.”2 Near-total pulverization and dismemberment would require a tremendous collision of materials at each floor, and yet NIST claims that the structure below “offered minimal resistance to the falling building mass.”3 The official hypothesis thus attempts to have it both ways: “minimal resistance,” “free fall,” deceleration “far too small to be perceptible”4 — and yet near-total pulverization and dismemberment of the buildings’ concrete and steel. But according to Dr. Steven Jones, a former physics professor at Brigham Young University, “The paradox is easily resolved by the explosive demolition hypothesis, whereby explosives quickly remove lower-floor material including steel support columns and allow near free-fall-speed collapses.”5

As the concrete was being pulverized and the structures were being dismembered, a large percentage of the buildings’ materials was ejected laterally far beyond the perimeters of the buildings. According to the FEMA Building Performance Study, the debris fields extended as far as 400 to 500 feet from each tower’s base. 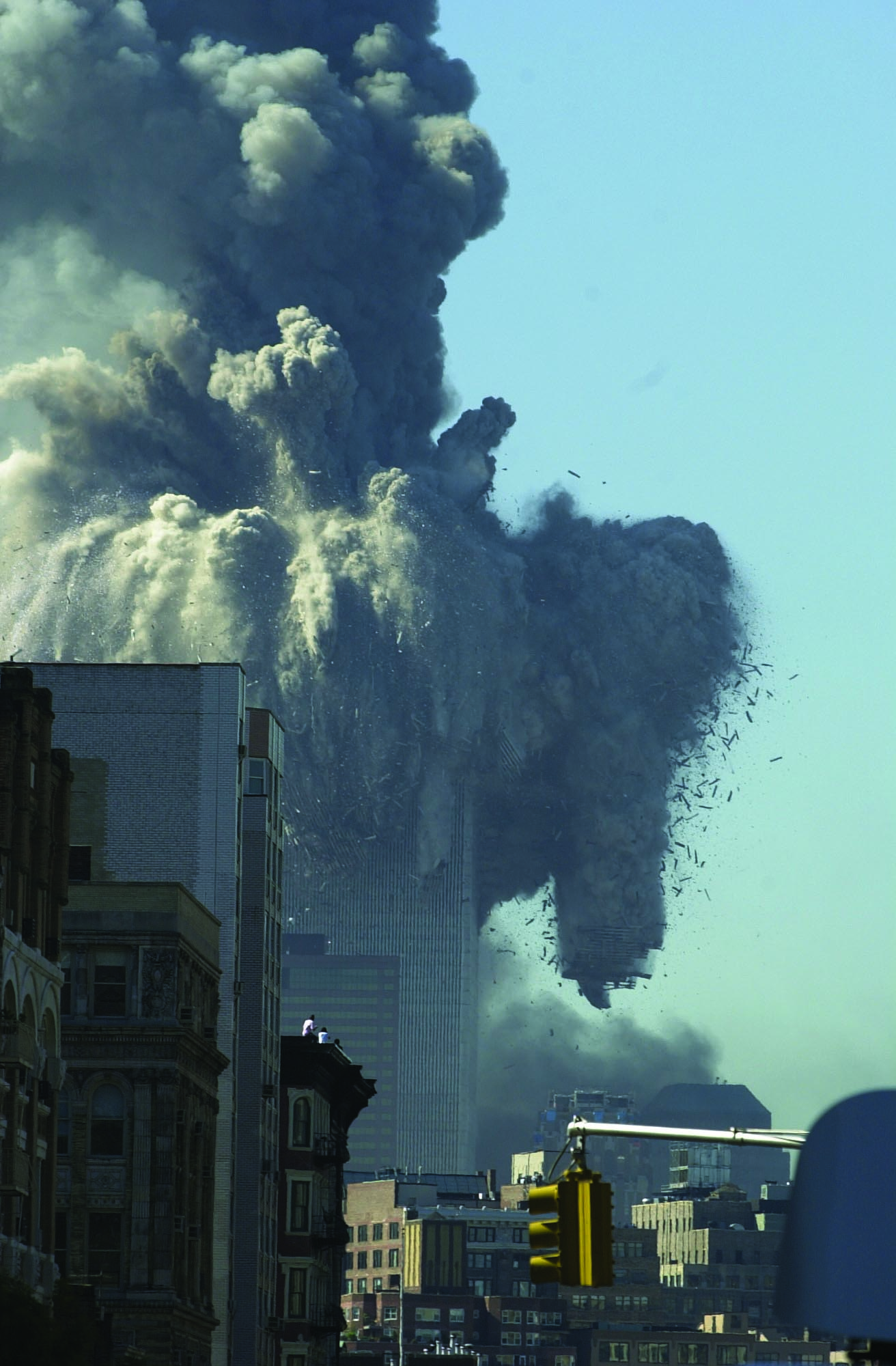 The materials of WTC 1, including multi-ton beams, were explosively ejected several hundred feet in all directions.

“[U]nder the canopy of falling debris, do you see the rapid sequence of explosive ejections of material? Some of the jets have been clocked at over 100 mph.... They’re continuous and widespread. They move progressively down the faces of the building, keeping pace with the falling debris.... The building is being progressively destroyed from the top down by waves of explosions creating a huge debris field.”

Chandler then describes the hurling of multi-ton steel members:

“Notice that embedded in the dust clouds are huge girders and entire sections of steel framing that are being hurled out of the building.... Some landed as much as two football fields away from the base of the tower.”

Chandler next addresses the claim that the ejection of these girders was caused by a spring action resulting from the upper sections crushing down upon them.

“Some people have suggested that the weight of the tower crushing down on the girders caused them to flex and they sprung sideways by a spring action. But we are not seeing isolated jumping girders. We are seeing a major fraction of the mass of the building...reduced to small pieces of rubble and fine dust, and being explosively ejected in all directions.”

Along with the pulverization, dismemberment, and explosive ejection of the buildings’ materials, we observed what Kevin Ryan describes as “high velocity bursts of debris ejected from point-like sources.”6 According to Ryan, “[T]he demolition hypothesis suggests that these bursts of debris are the result of the detonation of explosive charges (squibs), placed at key points in the structure to facilitate the removal of resistance.” Ryan goes on to describe these apparent squibs in more detail: 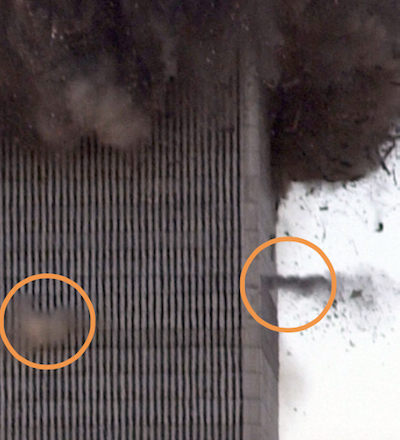 High-velocity bursts of debris, or “squibs,” were ejected from point-like sources in WTC 1 and WTC 2, as many as 20 to 30 stories below the collapse front.

“In the videos we can see these bursts being ejected from the sides of the towers nearly 30 floors below the collapse front....

“Each of these was a sharp emission that appeared to come from a point-like source, ejecting approximately 50 to 100 feet from the side of the building in a fraction of a second. From the extracted frames of the KTLA video,16 we can estimate that one of the bursts was fully ejected in approximately .45 seconds. This gives an average burst velocity of approximately 170 feet per second.”

NIST’s explanation for these high-velocity bursts of debris is provided not in its final report, but in its FAQs, where it calls them “puffs of smoke” and says, “[T]he falling mass of the building compressed the air ahead of it — much like the action of a piston — forcing smoke and debris out the windows as the stories below failed sequentially.”7

Kevin Ryan offers several arguments for why NIST’s explanation is not valid:

[1] Architects & Engineers for 9/11 Truth: Beyond Misinformation: What Science Says About the Destruction of World Trade Center Buildings 1, 2, and 7. Chapter 3, Endnote 13.

[2] NIST: Final Report of the National Construction Safety Team on the Collapses of the World Trade Center Towers (December 1, 2005), p.146.

[4] Bažant, Zdeněk and Le, Jia-Liang: “Why the Observed Motion History of the World Trade Center Towers is Smooth,” Journal of Engineering Mechanics (January 2011).