Today, the National Institute of Standards and Technology (NIST) acknowledges that WTC 7 fell at a rate of free fall (or the rate of gravity) for a period of approximately 2.25 seconds before it started to slow down.1 David Chandler, a physics teacher who has studied the behavior of WTC 7 extensively, explains the significance of free fall in the article titled “Free Fall and Building 7 on 9/11”: 2

WTC 7 is shown falling symmetrically into its own footprint. It accelerated at free fall for 2.25 seconds of its descent.

“Newton’s third law says that when objects interact, they always exert equal and opposite forces on each other. Therefore, while an object is falling, if it exerts any force on objects in its path, those objects must push back, slowing the fall. If an object is observed to be in free fall, we can conclude that nothing in the path exerts a force to slow it down....”

Applying this to WTC 7, he explains:

“[F]ree fall is not consistent with any natural scenario involving weakening, buckling, or crushing because in any such a scenario there would be large forces of interaction with the under- lying structure that would have slowed the fall.... Natural collapse resulting in free fall is simply not plausible....”

On August 21, 2008 — six years to the day after NIST’s World Trade Center investigation was first announced — NIST released its draft report on WTC 7 for public comment. In it, NIST described the collapse time of WTC 7 as being 40 percent longer than the time it would take to collapse in free fall:

“The time the roofline took to fall 18 stories was 5.4 s[econds].... Thus, the actual time for the upper 18 floors of the north face to collapse, based on video evidence, was approximately 40 percent longer than the computed free fall time....” 3

NIST repeated this claim in its Questions and Answers about the NIST WTC 7 Investigation (WTC 7 FAQs), stating unequivocally, “WTC 7 did not enter free fall.” NIST’s lead investigator, Dr. Shyam Sunder, repeated it again at NIST’s WTC 7 Technical Briefing on August 26, 2008, when asked the following question, which had been submitted by David Chandler:

Chandler: “Any number of competent measurements using a variety of methods indicate the northwest corner of WTC 7 fell with an acceleration within a few percent of the acceleration of gravity. Yet your report contradicts this, claiming 40 percent slower than free fall, based on a single data point. How can such a publicly visible, easily measurable quantity be set aside?”

Dr. Sunder responded by articulating the meaning of free fall in the clearest terms possible, but denied that is what happened in the case of WTC 7: 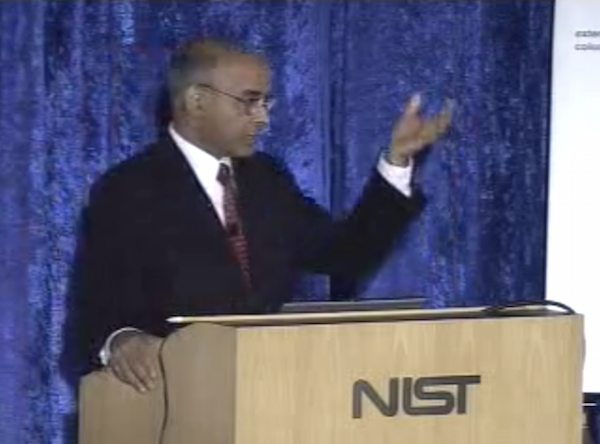 Sunder: “[A] free-fall time would be an object that has no structural components below it.... What the analysis shows...is that same time it took for the structural model to come down...is 5.4 seconds. It’s about 1.5 seconds, or roughly 40 percent, more time for that free fall to happen. And that is not at all unusual because there was structural resistance that was provided in this particular case.”

The reason for the discrepancy between Chandler’s measurement and NIST’s measurement is contained in Dr. Sunder’s statement above, where he explains that NIST’s computer model showed a collapse time of 5.4 seconds. As Chandler comments in Part 1 of the video series NIST Finally Admits Free Fall:

“Don’t you find it interesting that the 5.4 seconds [NIST] measured for the collapse time just happens to exactly match the theoretical prediction of their model? That kind of precision is incredibly rare when modeling real world events.”

Indeed, when we count backwards 5.4 seconds from the point at which the roofline disappears from view, we find that there is no obvious, continuous movement of the building that could be reasonably interpreted as the start of the collapse. According to Chandler, “Since their model predicted 5.4 seconds for the 18-story collapse, they dutifully conjured up a 5.4-second measurement to match [the model].” Then, NIST assumed that the downward acceleration during those 5.4 seconds was “approximately constant” 4 — even though the building was almost entirely motionless for more than a second. Based upon this inaccurate characterization of WTC 7’s motion, NIST denied the occurrence of free fall.

To the surprise of many observers, NIST reversed its position in its final report, acknowledging that WTC 7 did enter free fall for 2.25 seconds. But NIST still maintained the total collapse time of 5.4 seconds, which now comprised three separate stages:

However, in the first stage — which NIST characterizes as “a slow descent with acceleration less than that of gravity that corresponded with the buckling of the exterior columns at the lower floors” — the building is actually nearly motionless. By asserting a first stage in which we are to imagine “the buckling of exterior columns” causing “a slow descent,” NIST is obscuring an important feature of WTC 7’s free fall: its sudden onset. In Part 3 of the video series NIST Finally Admits Free Fall, Chandler observes:

“What is particularly striking is the suddenness of onset of free fall. Acceleration doesn’t build up gradually. The graph [plotting the rate of acceleration] simply turns a corner. The building went from full support to zero support instantly....”

Taking the rate of acceleration, suddenness, and symmetry of WTC 7’s descent into account, Chandler concludes: 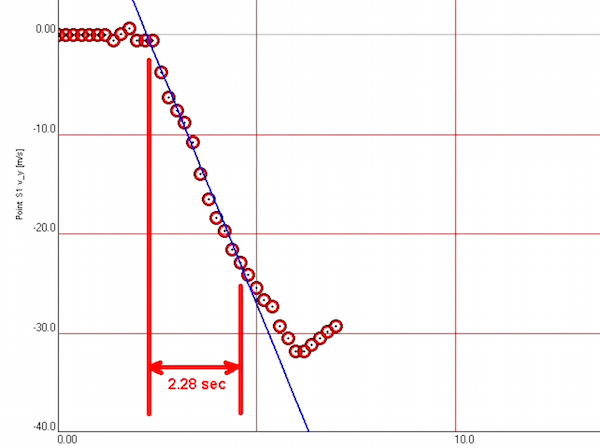 David Chandler’s graph from Part 3 of “NIST Finally Admits Free Fall” plots the velocity of WTC 7’s roofline versus time. The slope shows a free-fall rate of acceleration. The sudden change in slope shows the sudden onset of free fall.

“The collapse we see cannot be due to a column failure, or a few column failures, or a sequence of column failures. All 24 interior columns and 58 perimeter columns had to have been removed over the span of eight floors low in the building simultaneously to within a small fraction of a second, and in such a way that the top half of the building remains intact and uncrumpled.”

While the hypothesis of controlled demolition explains WTC 7’s free fall readily, simply, and completely, NIST’s final report provided no explanation for how free fall was accomplished. It simply asserted, “The three stages of collapse progression described above are consistent with the results of the global collapse analyses discussed in Chapter 12 of NIST NCSTAR 1-9,” (the chapter that presents the results of NIST’s “global model”). But that statement is incorrect. As discussed in The Official Theory, the free fall in Stage 2 is not shown in NIST’s model.

[4] NIST: NCSTAR 1A Draft Report, p. 40. The term “descent speed,” used in the cited sentence, was an error made by NIST. “Acceleration” was meant.

[5] This condensed description of the three stages of WTC 7’s collapse appears in NIST’s WTC 7 FAQs.