“Perhaps the deepest mystery uncovered in the investigation involves extremely thin bits of steel collected...from 7 World Trade Center.... The steel apparently melted away, but no fire in any of the buildings was believed to be hot enough to melt steel outright.... A preliminary analysis at Worcester Polytechnic Institute [WPI]...suggests that sulfur released during the fires—no one knows from where—may have combined with atoms in the steel to form compounds that melt at lower temperatures.” 1

The WPI professors, who were “shocked” by the “Swiss cheese appearance” 2 of the steel, reported their analysis in Appendix C of the FEMA WTC Building Performance Study, making the following recommendation:

“The severe corrosion and subsequent erosion of Samples 1 and 2 are a very unusual event. No clear explanation for the source of the sulfur has been identified.... A detailed study into the mechanisms of this phenomenon is needed....” 3

A simple explanation for the source of sulfur, as well as the high-temperature corrosion and erosion, is “thermate,” which is produced when sulfur is added to thermite. In “Revisiting 9/11—Applying the Scientific Method,” Dr. Steven Jones explains:

“When you put sulfur into thermite it makes the steel melt at a much lower temperature, so instead of melting at about 1,538°C it melts at approximately 988°C, and you get sulfidation and oxidation in the attacked steel....

“The thermate reaction proceeds rapidly and is in general faster than basic thermite in cutting through steel due to the presence of sulfur.” 4

How did NIST respond to FEMA’s recommendation?

First, NIST ignored it — thus ignoring what the The New York Times called “perhaps the deepest mystery uncovered in the investigation.” 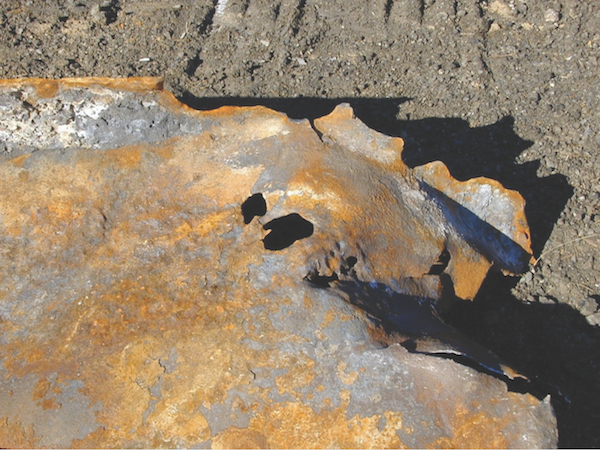 The eroded, sulfidated steel from WTC 7 at the scrapyard before it was cut off and taken for testing.

Second, NIST claimed that no identifiable steel was recovered from WTC 7, providing the following answer in its WTC 7 FAQs:

“Once [debris] was removed from the scene, the steel from WTC 7 could not be clearly identified. Unlike pieces of steel from WTC 1 and WTC 2, which were painted red and contained distinguishing markings, WTC 7 steel did not contain such identifying characteristics.” 5 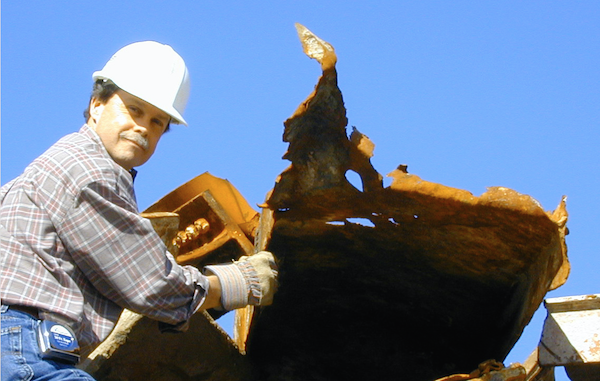 John Gross, who represented NIST on the FEMA Building Performance Study, poses next to the eroded, sulfidated steel. NIST would later claim that no identifiable steel was recovered from WTC 7, and John Gross would deny the existence of molten metal.

“[T]here is reference often made to a piece of steel from Building 7.... But that piece of steel has been subsequently analyzed by Professor Barnett and by Professor Rick Sisson, who is also from [WPI]...and they reported in a BBC interview that aired on July 6 [2008] that there was no evidence that any residue in that...piece of steel had any relationship to an...incendiary device in the building.” 6

Besides contradicting NIST’s position that no identifiable steel was recovered from WTC 7, Dr. Sunder’s response raises the question: Why did NIST not ask to study that piece of steel if they knew it existed? Furthermore, why did NIST not perform experiments to verify the leading fire-based explanation for the source of sulfur, which was the buildings’ gypsum wallboard?

Though NIST was not up to the task, a civil engineer named Jonathan Cole was. In his experiment documented in the video 9/11 Experiments: The Mysterious Eutectic Steel, he used a wide flange beam packed with crushed gypsum board, crushed concrete, aluminum scraps, steel scraps, and diesel fuel, and he burned it for 24 hours, continually adding fuel such as brush, furniture, floor panels, and wood logs. At the end of his experiment he reported:

“There is a reason why NIST...never conducted any experiments or found that source of sulfur in order to solve this deepest of mysteries. Perhaps NIST knew the most logical cause of the sulfidation of the steel is from some type of thermitic reaction....”

[5] NIST: Questions and Answers about the NIST WTC 7 Investigation, Question #27.