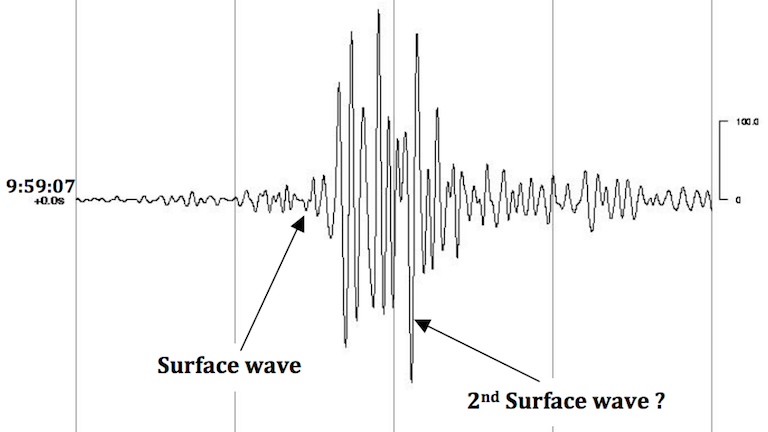 Were Explosives the Source of the Seismic Signals Emitted from New York on September 11, 2001?

Abstract: The seismic signals propagating from New York on September 11, 2001, recorded at Palisades (34 km) and published by the Lamont-Doherty Earth Observatory of Columbia University (LDEO), have here been subjected to a new critical study concerning their sources. The aim of this paper is to demonstrate that the nature of the waves, their velocities, frequencies, and magnitudes invalidate the official explanations which imply as sources the percussion of the twin towers by planes and the collapses of the three buildings, WTC1, WTC2 and WTC7.

First of all, we show the contradictions in the official explanation between the seismic data and the timing of the events. Then we point out that it is strange that identical events (percussions of identical towers on the one hand, and collapses of identical towers on the other hand) at the same location would have generated seismic sources of different magnitudes. We demonstrate that only strong explosives could be the cause of such seismic waves, in accordance with the observed low frequencies. According to the nature of the recorded waves (body and surface waves), we can propose a location of each explosive source. According to the presence of shear waves or the presence of Rayleigh waves only, we hypothesize a subterranean or a subaerial explosion. The magnitude of an aerial explosion is insufficient to provide seismic waves at 34 km.

The witnesses and video observation confirm our conclusions of subaerial explosions close to the times of aircraft impacts on WTC1 and WTC2, a strong subterranean explosion closely correlated with the WTC1 collapse, and subaerial explosions closely correlated with the WTC2 and WTC7 collapses, WTC7 not having been hit by a plane. As a consequence, we draw the conclusion that the three buildings were demolished by a controlled process.