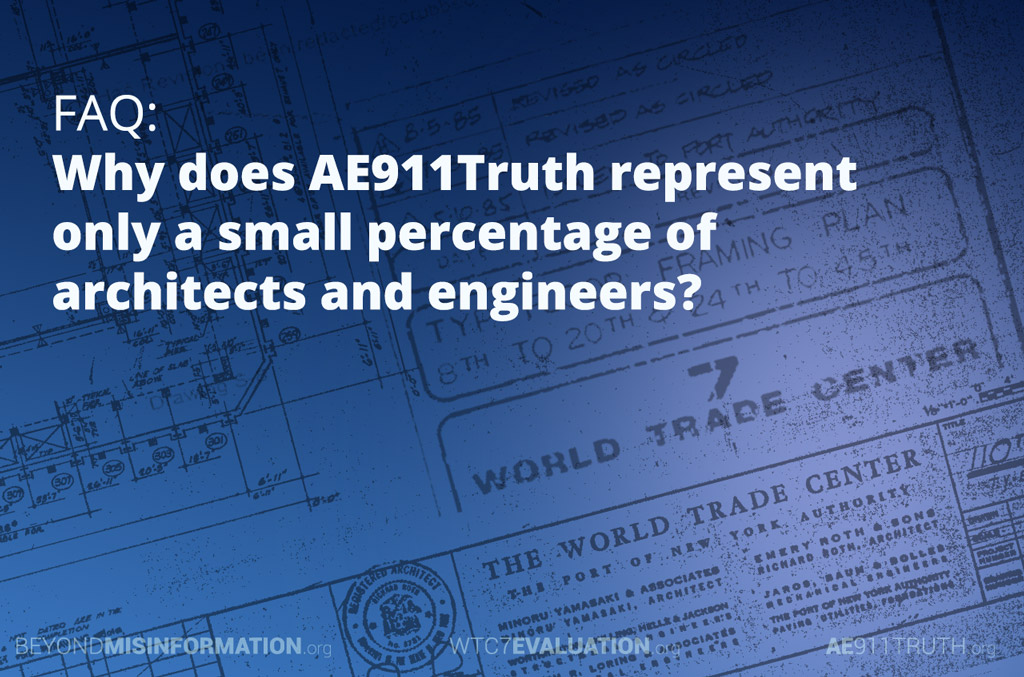 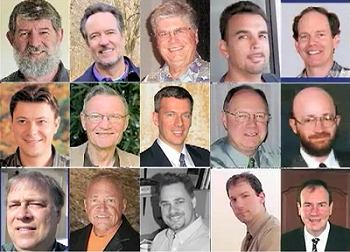 Regardless of the hundreds of architects and engineers who have signed the AE911Truth petition demanding a new investigation, the evidence for the WTC controlled demolition stands on its own.

Those who raise this point often do so in an attempt to avoid dealing with the scientific evidence brought forth by AE911Truth.

The real question should be, “Is the evidence the architects and engineers are bringing forth factual and worthy of a real investigation?” To that question, we answer, “Yes.” It doesn’t matter whether there is one architect and one engineer, or 12, or 100, or 1,600, or 16,000.

In other words, those who question a premise simply because the number of adherents of that premise is deemed too small are engaging in a logical fallacy often referred to as an "appeal to majority."

Consider this example of that fallacy: “Seven in 10 doctors say the pharmaceutical drug Lipitor works, therefore it must work.”

It doesn’t really matter if 10 in 10 doctors say Lipitor works: If there is insufficient evidence to support the statement, we cannot necessarily trust a majority of opinions—particularly when they may have a vested interest in dispensing the drug. If a large number of doctors believe that it works, then all that is really worthy of our time is further investigation for evidence to support the claim. But there is insufficient reason to blindly believe the unproven statement based only on a belief by a majority.

AE911Truth accordingly places its spotlight on the evidence for the controlled demolition of the World Trade Center skyscrapers and asks that people not believe any explanation blindly but instead consider all of the pertinent facts when they are revealed by the scientific method.

It should also be noted that the failure to condemn the official story by such a "majority" should not be viewed as an endorsement of that story. One should not assume that the individuals comprising the majority opinion have been exposed to all the relevant information on the topic. For example, a recent survey revealed that 75% of New Yorkers had never seen video footage of the destruction of WTC Building 7. It’s also true that most architects and engineers know nothing at all about WTC 7's collapse at 5:20 PM on 9/11—a collapse regarded as the third worst structural failure in modern history.

To illustrate, a general lack of knowledge about the explosive WTC evidence was displayed among A/E professionals at the September 11, 2011, NYC premiere of the AE911Truth film, 9/11: Explosive Evidence—Experts Speak Out. One individual who held a professional engineer's license asked during the Q&A session why he had never heard of AE911Truth. An architect at the same screening was found in tears over the terrible implications of the evidence.

Fox News host Geraldo Rivera expressed great surprise when he invited Tony Szamboti, a mechanical engineer and signer of the AE911Truth petition, on his program in late 2010. For years prior to that, Rivera was dismissive of the 9/11 Truth Movement. This time, he said he was, “much more open-minded about it . . . due to the involvement of 9/11 family members and the 1,300 architects and engineers.”

In reference to the Remember Building 7 campaign, he said:

“What caught my eye is their claim that more than 1,300 architects and engineers examined the evidence about Building 7 and disagree with the official report issued by the National Institute of Standards and Technology.”

It is also important to note that during each of over 200 live presentations of the evidence detailed in our documentary, 9/11: Blueprint for Truth, a show of hands afterwards consistently revealed that at least 85% of those who were either unsure or who accepted the prevailing opinion about the Twin Towers’ destruction beforehand wound up agreeing with the evidence for controlled demolition after seeing it.

In addition, there is no way to calculate how many A/Es are aware of this evidence but are unwilling to take a public stance on such a controversial matter. 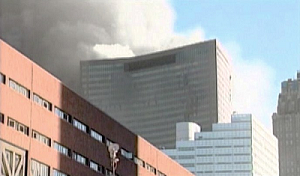 Most technical experts have never had a chance to view the WTC 7 collapse videos or the other pieces of evidence that confirm the controlled demolition hypothesis.Even if the flawed argument of "strength in numbers" is to be seriously considered, the comparison should actually be between the AE911Truth petition signers and those who have publicly supported the official story after studying the evidence for controlled demolition. The latter group consists only of the several dozen engineers who created the US government-run National Institute of Standards and Technology reports on the World Trade Center destruction—along with a handful of various professionals who have openly advocated NIST’s claims and dismissed those of AE911Truth.

This total pales in comparison to the more than 1,600 architects and engineers (as of December 2011) [2,786 as of February 8, 2017] who are calling for an independent investigation of the destruction of the Twin Towers and WTC Building 7. As civil engineer Jonathan Cole has noted, “There is a good reason why there is no group called 'Architects and Engineers who Publicly Support the Official Story.’”

Indeed, the numbers would be embarrassing. Few A/Es have even taken the time to examine the more than 12,000 pages of NIST documents whose authors clearly intended to obscure the issues and ignore the most critical evidence.

Other ignored variables include the fact that there are more than 13,000 additional signatories [21,370 as of February 8, 2017] at AE911Truth. They include many highly credentialed people in other fields equally relevant to the issue. These "other" petition signers include metallurgists, physicists, explosives experts and demolition contractors. Furthermore, there are other 9/11 Truth groups that represent hundreds of people credentialed outside the fields of architecture and engineering, such as Pilots for 9/11 Truth and Firefighters for 9/11 Truth and Unity.

Finally, as noted by AE911Truth contributing writer Gregg Roberts, the logical fallacy known as "moving the goalposts" is also at play here. Roberts writes, “. . . 'Debunkers' . . . dismissed our arguments first because, allegedly, no engineers agreed with us. While that was never true to begin with, after AE911Truth was formed and scores of engineers signed the petition, these debunkers predictably moved the goalposts, saying we didn't have any engineers who know anything about heavy steel structures such as tall buildings.” However, dozens of structural engineers, such as those featured in the documentary 9/11: Explosive Evidence—Experts Speak Out, have rejected the official story in favor of controlled demolition, citing the overwhelming evidence for that conclusion, much of which was entirely ignored by the official reports. With the "argument from missing authority" refuted, Roberts concludes, "the goalposts will no doubt just be moved again by people who simply don't want to face the evidence."

Fortunately, these false arguments have not stopped hundreds of architects and engineers and thousands of other concerned citizens from examining the evidence and signing the petition for a real investigation. Every day, more and more AEs discover the truth and sign the petition. The same goes for members of the general public. While strength in numbers is not proof in itself, everyone who sides with truth amplifies the voice of truth about any subject, including World Trade Center catastrophe.