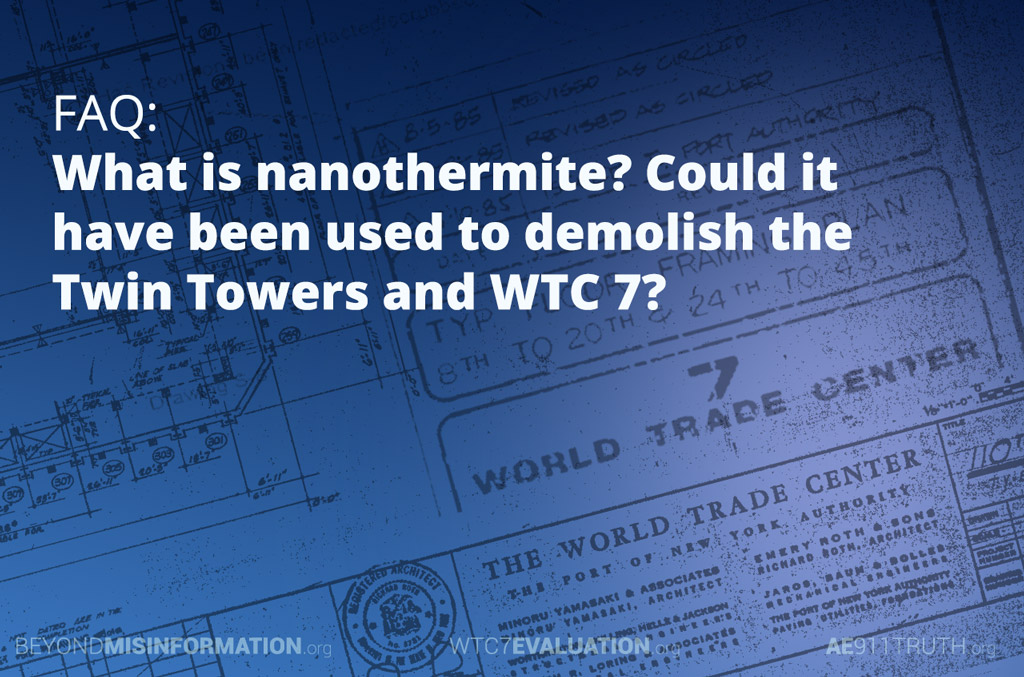 FAQ #7: What is nanothermite? Could it have been used to demolish the Twin Towers and WTC 7? 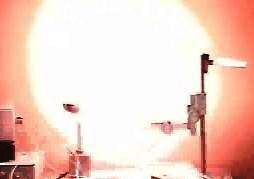 As shown above, Lawrence Livermore National Laboratory (LLNL) created nano-thermite composite materials with explosive properties by adding gas-releasing components.In order to understand what nano-thermite is, we first must understand what ordinary commercial thermite is. Thermite is a mixture of one metal, usually aluminum (Al), with the oxide of another metal, usually iron oxide (Fe2O3), in a granular or powder form. When ignited, the energetic Al-Fe thermite reacts and produces molten iron and aluminum oxide, with the molten iron reaching temperatures well in excess of 4,000ºF. These temperatures are certainly high enough to allow cuts through structural steel, which generally has a melting point of around 2,750ºF.

A variant of thermite is thermate, which is a combination of thermite and sulfur—a combination that is more efficient at cutting through steel. This form of thermite is believed to have been used in the demolition of World Trade Center Building 7. Although conventional thermite has the capability to cut through structural steel, it is technically an incendiary and not an explosive.

Nano-thermite (also known as super-thermite), is, simply put, an ultra-fine-grained (UFG) variant of thermite that can be formulated to be explosive by adding gas-releasing substances. A general rule in chemistry is that the smaller the particles of the reactants, the faster the reaction. Nano-thermite, as the name suggests, is thermite in which the particles are so small that they are measured in nanometers (one billionth of a meter). The authors of the peer-reviewed Active Thermitic Materials paper, which documents the discovery of these materials in the WTC dust, explain:

Available papers [by Lawrence Livermore National Laboratory and others] describe this material as an intimate mixture of UFG aluminum and iron oxide in nano-thermite composites to form pyrotechnics or explosives. The thermite reaction involves aluminum and a metal oxide, as in this typical reaction with iron oxide: 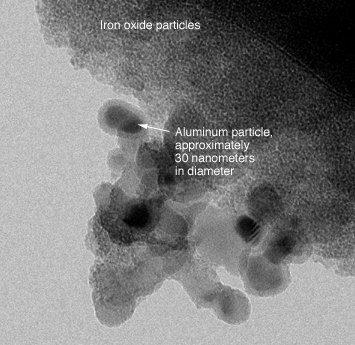 According to Randy Simpson, director of the Energetic Materials Center at LLNL, “since these ‘nanostructures’ are formed with particles on the nanometer scale, the performance can be improved over materials with particles the size of grains of sand or of powdered sugar.”The public announcements of the development of nano-thermite composite materials as explosives date back several years before 9/11. As Dr. Frank Legge points out, “researchers were describing methods of preparing nano-sized particles, using them in superthermite, and calling such material ‘explosive’ in 1997. It would therefore not be correct to assert that by 2001, four years later, they would be unable to utilize the material in demolition.”

In addition, 911research.wtc7.net notes the following:

One of the critiques of theories that thermite was used to destroy the World Trade Center skyscrapers asserts that thermite preparations don’t have sufficient explosive power to account for the observed features of the buildings’ destruction. This criticism seems to be uninformed by knowledge of some of the aluminothermic preparations known to exist — particularly those being researched for military applications.

Indeed, 9/11 researcher Kevin Ryan has shown that there is substantial documentation detailing how nano-thermite has been formulated to be explosive. For example, a summary report released at the 2008 AIChE conference by chemists at the University of Houston describes how nano-thermite composites can be engineered to create explosives:

Nanoenergetic thermite materials release energy much faster than conventional energetic materials and have various potential military applications, such as rocket propellants, aircraft fuel and explosives. They are likely to become the next-generation explosive materials, as they enable flexibility in energy density and power release through control of particle size distribution, stoichiometry and choice of fuel and oxidizer.

Some critics have also claimed that neither thermite nor nano-thermite has ever been used to demolish steel structures. Even if this assertion were true, it would not be proof in and of itself that these materials could not be used in demolition. Notes Dr. Legge:

It could be true, and probably is true, that the three buildings which came down on 9/11 were the first in which some variation of the thermite reaction was used in demolition. It is however not logical to say something cannot have happened merely because it had not happened before: there has to be a first time for everything. It is certainly true that thermite had been used many times in arson attacks prior to 9/11.

However, we find that thermite has in fact been used to demolish steel structures in the past. Popular Mechanics itself documents that thermite was used in the demolition of structures such as the Skyride Tower in Chicago and the dome of the German Reichstag. Furthermore, experiments conducted by civil engineer Jonathan Cole have shown that ordinary thermate can be used to effectively cut through steel columns. And as described earlier, the effectiveness of nano-thermite is much higher than that of ordinary thermate.

To read more about the thermitic materials that were involved in the destruction of the three World Trade Center towers, see the AE911Truth Evidence webpage and our original article about the discovery of these composites in the WTC dust.