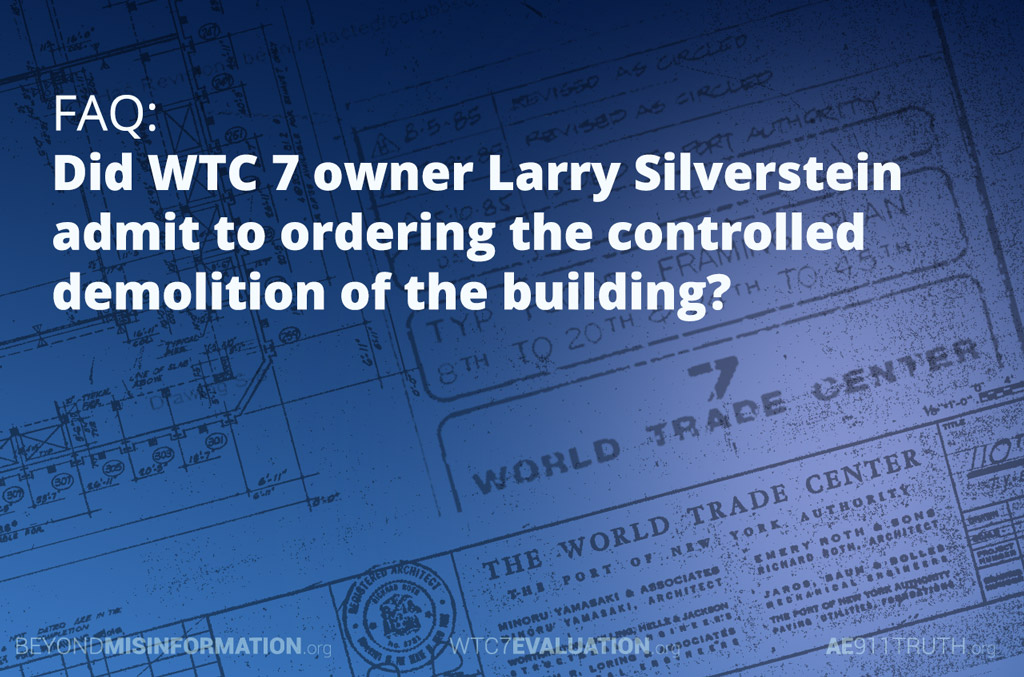 FAQ #12: Did WTC 7 owner Larry Silverstein admit to ordering the controlled demolition of the building?

During a TV interview with PBS for “America Rebuilds” in 2004, World Trade Center Building 7 owner and Twin Towers leaseholder Larry Silverstein made the following statement about the destruction of Building 7:

I remember getting a call from the fire department commander, telling me that they were not sure they were gonna be able to contain the fire, and I said, 'We've had such terrible loss of life, maybe the smartest thing to do is pull it.' And they made that decision to pull and then we watched the building collapse. 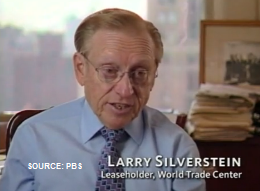 The term “pull” is also used later in the same PBS documentary by a Ground Zero cleanup worker, who said of WTC 6, “It’s not every day you try to pull down an eight-story building with cables.” However,. . . this procedure is different from using explosives to destroy a much taller building.

In addition, according to research performed by independent 9/11 investigator Jim Hoffman, the term "pull" is not widely used in the demolition industry to refer to the explosive demolition of a building.

If Silverstein wasn't referring to the controlled demolition of WTC 7, what could he have been referring to?

Later in the day, the Fire Commander ordered his firefighters out of the building and at 5:20 p.m. the building collapsed. No lives were lost at Seven World Trade Center on September 11, 2001.

This statement contradicts the FEMA report on WTC 7 (Chapter 5, section 5.6.1), which indicates that no manual firefighting actions were taken at WTC 7 on 9/11.

On the other hand, there are some reports by FDNY firefighters that leave open the possibility that Silverstein was referring to pulling firefighting crews away from the area surrounding WTC 7.

They told us to get out of there because they were worried about 7 World Trade Center, which is right behind it, coming down. We were up on the upper floors of the Verizon building looking at it. You could just see the whole bottom corner of the building was gone. We could look right out over to where the Trade Centers were because we were that high up. Looking over the smaller buildings. I just remember it was tremendous, tremendous fires going on. Finally they pulled us out. They said all right, get out of that building because that 7, they were really worried about. They pulled us out of there and then they regrouped everybody on Vesey Street, between the water and West Street.

I ordered the evacuation of an area sufficient around to protect our members, so we had to give up some rescue operations that were going on at the time and back the people away far enough so that if 7 World Trade did collapse, we [wouldn't] lose any more people. 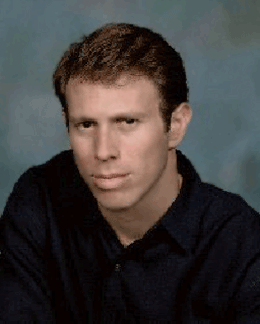 According to Fox News journalist Jeffrey Scott Shapiro, Silverstein tried on the afternoon of 9/11 to get approval to demolish WTC 7.Therefore, it is possible that when Silverstein said "pull it," he was not talking about demolishing the building or pulling firefighters out of the building, but was instead referring to pulling firefighters away from the area surrounding WTC 7. The problem is that Silverstein's comment is so cryptic and vague that it is impossible to know for sure what he was referring to.

However, according to Fox News journalist Jeffrey Scott Shapiro, a 9/11 eyewitness and ardent defender of the official 9/11 story, Larry Silverstein had controlled demolition on his mind on September 11, 2001, and it was no secret to the NYPD and others on the ground that day. In an article entitled ‘Shame On Jesse Ventura!’ Shapiro wrote:

Shortly before the building collapsed, several NYPD officers and Con-Edison workers told me that Larry Silverstein, the property developer of One World Financial Center was on the phone with his insurance carrier to see if they would authorize the controlled demolition of the building – since its foundation was already unstable and expected to fall.

Apparently unaware that it takes months of planning and setup to demolish a skyscraper, Shapiro added, “A controlled demolition would have minimized the damage caused by the building’s imminent collapse and potentially save lives.”

In the end, whether or not Silverstein admitted to personally authorizing the controlled demolition of WTC 7 has no bearing on the evidence presented by AE911Truth. The scientific, forensic, and eyewitness evidence surrounding the building’s destruction proves beyond any reasonable doubt that it was intentionally demolished. While Silverstein's actions as the leaseholder of the Twin Towers and the owner of Building 7 should be thoroughly examined with suspicion, only an unimpeachable, independent criminal investigation can determine who was responsible for destroying the WTC skyscrapers.