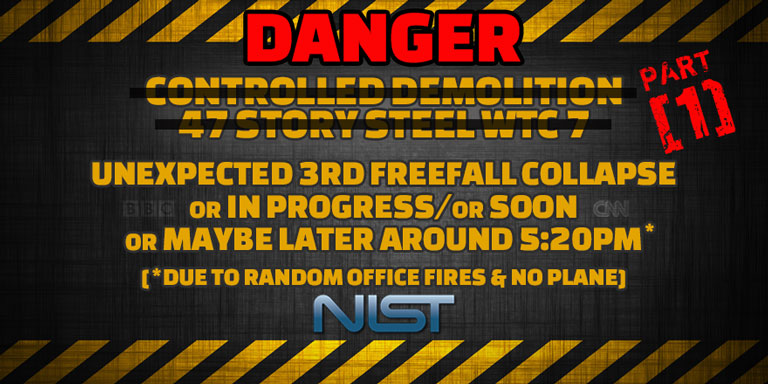 The timing of the fire on Floor 12 exposes NIST's false claim that fire led to the collapse.

Below, the four images in the middle column are photographs taken of World Trade Center 7 at four different times in the afternoon of September 11, 2001.

The four graphics in the left column are my approximations, using the photographs as a guide, of where—and at what times—a fire was actually burning on Floor 12.

And the four graphics in the right column are NIST's ANSYS computer model of where the fires were burning in the building at the same four times.

“Note that only window glass breaking times were prescribed in the fire model. The observed fire activity gleaned from the photographs and video were not a model input.” — NCSTAR 1-9, Vol. 2, page 378 [PDF page 40/444 in combined Vol. 1 and Vol. 2]

NIST will not release the input data because doing so, it claims, “might jeopardize public safety.” 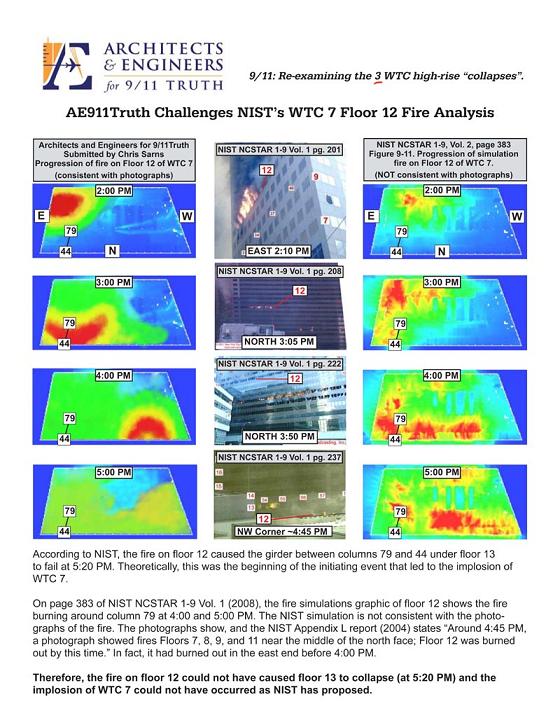 Quotes on the spreading of the fire:

“On those floors that were mostly subdivided into offices (such as Floors 11 and 12), the fire would have grown within a single office, reaching flashover within several minutes. After about 5 to 15 min, the ceiling tile system would have failed from the heat, and the hot air would have flowed over the office wall. Soon the hot air would fail the ceiling of an adjacent office, and eventually the thermal radiation would ignite the contents in this office. Fire spread would have been similar for offices separated by a corridor, although this would have taken longer, since the hot air would have to travel further and would be cooling along the way.” — NCSTAR 1A, page 19 [PDF page 61]

Fire on floor 12;[1] area above covered with smoke.

Fire on floors 11-12[1] moved to east face and progressed to the north.

“Fire was first seen on the 12th floor at 2:08 p.m. toward the south end of the east face. Further south on this face, the window glass was still intact, indicating that this fire had burned in the building interior as it turned the southeast corner.” — NCSTAR 1A, page 20 [PDF page 62] 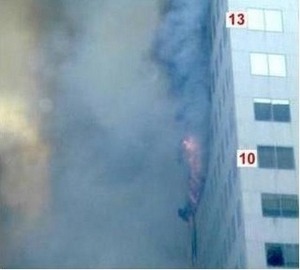 “By around 2:30 p.m., the visible flames had diminished, but the fire had spread both south into the southeast corner and north, reaching two-thirds of the way to the northeast corner.” — NCSTAR 1A, page 20 [PDF page 62] 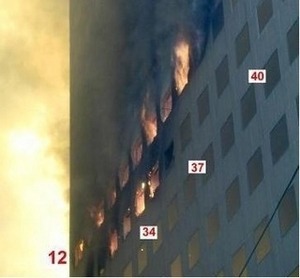 Fire first appeared on the north face of Floor 12 about 80 feet from the northeast corner:

The fire spread internally through the offices around column 79 and under the beams, which allegedly underwent enough thermal expansion to push a girder off its seat and initiate the “global collapse” at 5:20 PM. 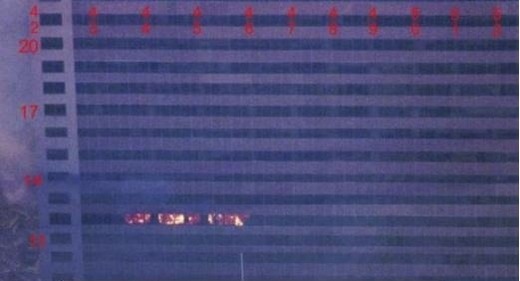 “In less than 15 min, the fire simultaneously spread rapidly to the east to engulf the northeast corner of the floor and more slowly westward about one-third of the way across the north face.” — NCSTAR 1A p. 20 [PDF page 62] 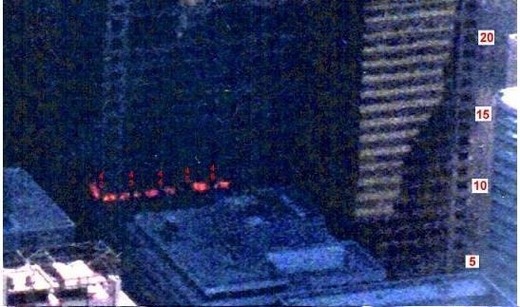 Figure 5-135. Cropped photograph showing the east edge of the north face and an oblique view of the east face. It was likely taken between 3:20 p.m. and 3:40 p.m.

“The fire continued spreading westward in starts and stops, approaching the northwest corner of the floor around 3:45 p.m.” — NCSTAR 1A, page 20 [PDF page 62] 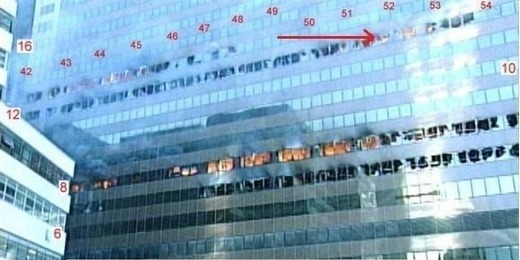 The photographs reveal that the fire on Floor 12 had progressed from the south side of the building to the north side via the interior offices by 3:00 PM and had engulfed the northeast corner by about 3:15 PM. This means that the fire in the area in question (around column 79 and under the beams and girder in the northeast corner) had burned out by about 3:50 PM, because, as noted above, the fires burned for only about 20 to 30 minutes in any given location. 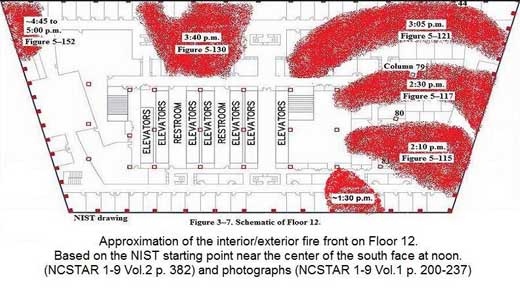 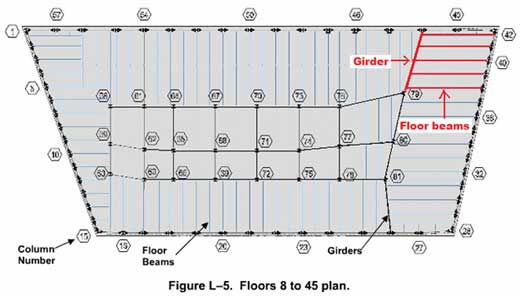