Editor's Note: This extensive piece on NIST's manipulation of the WTC 7 evidence is broken down into a series of fives articles. The first installment (Part 1) is presented below. 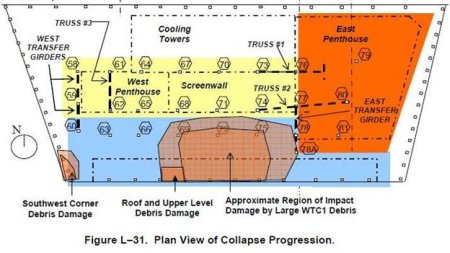 Figure 2. We will be showing this "Plan View of Collapse Progression" graphic in three installments of this series of articles, starting with this installment, where we have labeled it "A." The identical graphic will be labeled "B" and "C" in the next two installments. NIST's 2004 Progress Report depicts a mythical hole supposedly "scooped out" of the center of the bottom 10 floors of Building 7. Figure L-31 in Appendix L of the report refers to the hole as the "Approximate Region of Impact Damage by Large WTC1 Debris." Since this damage did not exist in reality, NIST backpedaled and did not include its discredited Figure L-31 in the final 2008 report.

In its infamous 2005 article, "Debunking the 9/11 Myths," Popular Mechanics quoted NIST director Shyam Sunder asserting that falling debris from the North Tower poked a huge "gouge" in the front of WTC 7: "The most important thing we found was that there was, in fact, physical damage to the south face of building 7." Sunder went on to say, "On about a third of the face to the center and to the bottom ― approximately 10 stories ― about 25 percent of the depth of the building was scooped out." [Emphasis added]

Remarkably, Sunder made this definitive statement despite having no solid evidence to back it up. In fact, a careful reading of its 2004 preliminary report reveals that NIST simply cherry-picked one eyewitness statement, even though other witnesses refute this dramatic, specific, and provably false claim of damage.

Specifically, the statement about the 10-story gouge appears on page 18 of NIST's 2004 report, but NIST conveniently ignored two other comments on the same page that are in conflict with its conclusion:

In sum, these two statements strongly suggest that evidence known to NIST at the time contradicted the statements it made in its own report in 2004 and via Popular Mechanics in 2005. NIST has since abandoned the story about the center of the bottom 10 floors being "scooped out" its final 2008 report. Yet it remains, as myths are wont to do, in the minds of most who read the NIST-sanctioned PM piece. 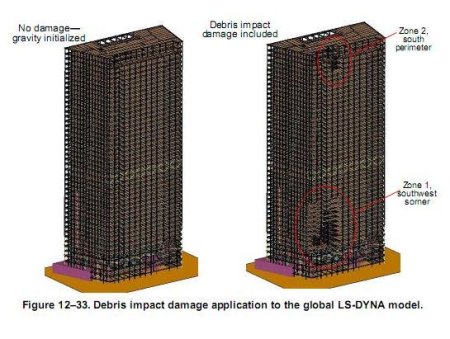 Figure 3. NIST's Figure 12-33, from its final 2008 report, depicts damage to the southwest corner that actually is supported by photographic evidence and witness reports. When this figure is compared to Figure L-31 in the 2004 preliminary report (see our Figure 2 above), it is apparent that NIST has abandoned the idea that there was a separate gouge that "scooped out" the center of the bottom 10 floors. Refer to PART 2 in order to discover why NIST initially fabricated the story about the gouge.

It may seem odd that a scientifically-oriented magazine like Popular Mechanics accepted Sunder's story about the huge (non-existent) gouge, since Sunder offered no photographs or clear witness statements to back up his claim. Then again, Popular Mechanics' severe lack of credibility has been previously addressed by AE911Truth in a series of damning articles.

It may seem even more peculiar that PM's editor at the time, James Meigs, wrote a piece titled, "The 9/11 Lies Are Out There: Editor's Notes," in which he bragged about the magazine's careful and thorough research. Meigs claimed that a team of editors, reporters, researchers, and "professional fact checkers" had "methodically analyzed, interviewed, and researched everything on the subject."

If the magazine did employ a team of competent, honest researchers, its work must have been tampered with or ignored. For even minimal truly scientific research would have revealed the bogus nature of Sunder's statements. To be fair, PM may have been completely unaware of the significance of Sunder's specific placement of the gouge, as will be discussed in PART 2. Still, that is no excuse for this journalistic failing, which comes across as more than simple naivety or mere incompetence.

Incredibly, when asked about the 2005 article, Popular Mechanics editor/researcher Davin Coburn could not have been telling the truth when he told Charles Goyette in a 2006 radio interview that he had seen photos of the 10-story gouge, even though they were never produced and "the gouge" claim was abandoned:

Coburn: "When the North Tower collapsed... there was damage to Building 7.... What we found out was... about 25% of the building's south face had been carved away from it.... We have seen pictures that are property of the NY Police Department and various other governmental agencies that we were not given permission to disseminate...."

Charles: "Popular Mechanics got to see them, but the average American citizen can't see them."

In the next (second) installment of this series, Part 2: NIST's Fictitious Gouge Launches "Design Flaw" Myth and "Collapse Initiation" Theory, the authors explore NIST's motive for creating the myth about the non-existent 10-story gouge and for putting so much emphasis on it in a Popular Mechanics article.