Activists Take on 13 Years of Denial in 5 Major Actions 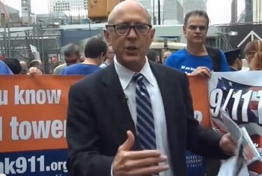 AE911Truth is just as at-home and productive in the streets educating New Yorkers as it is educating students and faculty in universities and building and design experts in professional settings. The non-profit group's three-day outreach began on Thursday morning, September 11, with a milestone press conference held at the corner of Vesey and Church right in front of the Liberty Tower. AE911Truth founder Richard Gage, AIA, opened the press conference to a dozen cameras. "We are here to tell the truth to the American people about that day, because they have not received the truth, the evidence. There are very serious problems with the official story, which has become the official myth." Gage proceeded to announce the upcoming New York City premiere of The Anatomy of a Great Deception and the symposium "The 9/11 Awakening Goes Mainstream," as well as the concurrent giant video billboard in Times Square.

Gage highlighted the five key benefits of 9/11 Truth to the 100 or so intrigued onlookers who had gathered on the street, starting with his own personal favorite, "9/11 Truth is Good for America because it restores our country's moral foundation and our faith in government."

Following the press conference, AE911Truth hosted the NYC opening of filmmaker David Hooper's The Anatomy of a Great Deception in Theatre 80 in the East Village. The 99-minute documentary features an average American, Hooper, asking a few innocent questions about 9/11, which changes his life forever. See our review of the packed premiere. 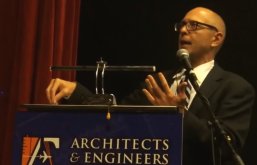 At this energized event, Gage asked the audience how many were attending as a result of seeing the large ad in The Village Voice. A dozen hands shot up. Then Les Jamieson, who heads New York City's 9/11 Truth group and who helped to coordinate this year's NYC 9/11 activities, chimed in, "How many people are here because they heard an ad on WBAI radio?" A bunch more hands. Yes, it's been good news for 9/11 Truth of late, with more national-level radio news coverage coming on the heels of AE911Truth's unprecedented 40-minute appearance on the C-SPAN program, Washington Journal. George Noory, host of Coast to Coast AM radio, also interviewed Gage, as did Infowar's Alex Jones and Jesse Ventura on We the People. 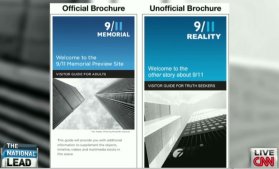 On Friday morning, several dozen AE911Truth backers showed up at the 9/11 Memorial Park near the 9/11 Museum. Since the museum's May opening, activists have been handing out the AE911Truth "alternative brochure" that reminds museum-goers what is not displayed inside — namely, red/gray thermite chips, photos and videos of explosive squibs, archived accounts of elevator rebuilds and fleeing elevator mechanics, film showing WTC 7's seven-second collapse, and wall plaques with quotes of first responders citing countdowns and explosions. "The receptivity is phenomenal," said Jamieson. "We're reaching civic groups, school groups, middle-class Americans from all over the country — indeed, people from all over the world. They can't get this information on the WTC evidence any other way. It's a great opportunity that Architects & Engineers for 9/11 Truth has provided for us." Jamieson encouraged newcomers to join the group's weekly brochure-distribution efforts: "We meet one block west of Zuccotti Park — at the corner of Liberty and Greenwich Streets. Just get in touch with me by email here and we'll get it together, so that we have people there every weekend." 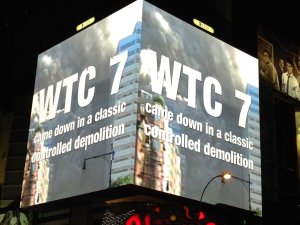 By 3:00 PM Friday, outreach actions had moved to a rally at 8th Avenue and 42nd Street, under the new Times Square digital billboard. "It's going to rock the world here in NYC!" predicted Gage. "Eighty-nine feet wide, 45 feet high, this billboard wraps all the way around the corner. Everybody driving into the Lincoln Tunnel has to see it." After the rally, the group convened at the 6th Street Community Center's 9/11 Truth Café for a meet-and-greet and brainstorming session, "What’s next?! How are we going to wake up the world in 2015?"

To ignite the thinking power of the session's activists, Gage warmed up the crowd by speaking first. "I'll just say this. I've been doing this a long time, and I really feel strongly, watching this movement unfold and grab momentum around the country and around the world," he enthused. "The people in this room have enough power and ability to change the world. Right here. We just have to use our creativity and commitment, put in a little time, and come up with some great ideas. That's how we've gotten this far, with groups like this all over the country, and then of course some leaders like the one standing next to me," Gage added, referring to Les Jamieson, who has been coordinating 9/11 Truth actions in New York for more than a decade. 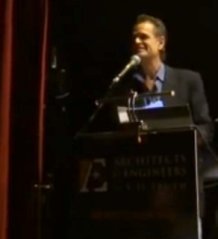 Les Jamison introduced the brand new 9/11 Museum Virtual Walking Tour, which Barbara Honegger and Bonnie Faulkner created for museum guests in order to discover for themselves the mysteries of the truth about 9/11 — facts they will not find in the museum. The guided tour uses elements within the museum to educate viewers about the complete shattering of all three WTC skyscrapers, the evidence about the Pentagon, the Shanksville crash, and much more!

Slowly the movement grows, gaining traction with every new voice. As of this writing, AE911Truth has 2,273 petition-signing architects and engineers in its fold. With the mainstream media just beginning to acknowledge its message, the movement is sure to advance at a faster pace in coming years. This paraphrase of a Buddhist saying, "Three things cannot be long hidden: the sun, the moon, and the truth," surely must include 9/11 Truth.