Down the Rabbit Hole: A 9/11 Anniversary Highlight

The Anatomy of a Great Deception Screens Countrywide 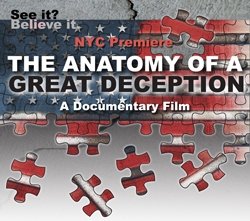 The film, which has the backing of Architects & Engineers for 9/11 Truth, premiered September 5 in Detroit and drew an impressive crowd of 375. Other screenings followed on or after September 11 in New York, Houston, Oakland, San Diego, and many other cities. 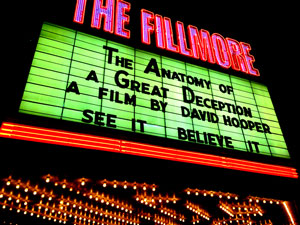 Anatomy chronicles Hooper's personal struggle as he reconstructs a world view that had been shattered when he began to research what really happened on September 11, 2001. At the Detroit kick-off, Hooper and his film were introduced by AE911Truth founder Richard Gage, who described the documentary as being Hooper's journey of awakening.

"David is a businessman-turned-filmmaker, a regular family man who unwittingly stumbles into the 9/11 debate, leading to his own investigation and to many life-changing conclusions he reached after he researched the evidence for himself," Gage noted.

"I'm inspired by the open mind David exhibited in his quest for the truth when he found himself retreating behind the 'arbitrary line in the sand' that he had drawn, for his own psychological safety, in the beginning of his journey." 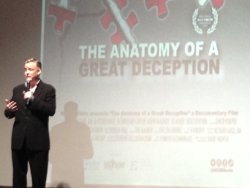 After the screening, Gage spoke to a number of audience members to get their reaction. He also spoke to several people who were involved in the filmmaking process.

Jim Schlenkert of Oakland County, Michigan, said that the well-constructed film offers those who are open to the evidence an opportunity to begin their own personal journey. "It touched on topics that are on a lot of people's minds, but they're going to have to do their own research and come to their own conclusions,” he said.

Jim's sister, Debra Schlenkert, observed that "people are going to open their eyes up as long as they take the time to watch it. I hope it'll just go across the country, and more and more people will see it. I really saw truth in the movie, and anybody watching it has to see that, too."

Jimmy Custer of Detroit told Gage that he thinks The Anatomy of a Great Deception can be especially inspiring to those who are newly aware of the challenges being made to the 9/11 official story. He added that "since Loose Change came out, I've been following this whole thing. So it's good to show that we're not 'nuts.' And it's good to see that some people who once felt that way about us have really studied things since then, and have learned otherwise."

Bill Hindelang, a metallurgical engineer from Michigan Tech University and one of the 2,273 professional architects and engineers who have signed the AE911Truth petition to date, talked about how he looks at Anatomy from an educational perspective. He wonders how to get the message of the film to those who haven't been exposed to the evidence or are reluctant to accept it. He asks himself, "What do I have to learn from this film and from this experience to take to these people and bring them forward in their understanding?"

Hindelang, who found the film "fantastic," said that within his family and among his close friends, who include a lot of engineers, "maybe only 25 percent of them see this subject the same way that I see it. The other 75 percent love me because I'm a friend or I'm a relative, but they haven't crossed the line. And I'm dumbfounded by this."

Detroiter Eric Wilkinson said he wanted to see the film to better understand the issues of 9/11. As he puts it, "I wanted to go a little deeper. I wanted to see what Mr. Hooper had to say."

Engineer Michael Woon, who contributed financially to the film and who is a signatory of the AE911Truth petition, said he started his awakening by questioning what happened at the Pentagon. Now, he explained, he takes any opportunity to plant a seed by sharing the evidence about 9/11. "I think it's a generational issue for a lot of people who 'bought' the Vietnam War or who 'bought' Lee Harvey Oswald, because they feel, in retrospect, like they made a judgment error. And as time goes on, they feel guilty about that, and they can't go back and revisit it. And so when something like 9/11 happens, if there are questions that are raised, they feel like their character is in question, because they have — and we all have, probably — submitted ourselves willingly to somebody else that we trusted, and we shouldn't have."

Gage also spoke with Anatomy co-producer Tony Scarboni, who related an eerie experience he and Hooper had while promoting the movie. "We were out flyering, and we were seeing U.S. drones flying above downtown Detroit at an Eminem concert. We're handing out flyers, thousands of flyers in one day for this movie, and right across the street, we see a drone flying really low. And that's when it got really real to us. We were just shocked — our jaws dropped. We couldn't grab our phones fast enough, you know." 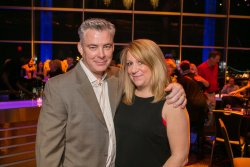 Hooper's wife, Betsy, revealed that she's not only proud of her spouse for creating this "beautiful and enlightening" film, but she credits it with saving their marriage.

Jennifer Champagne, who helped supervise the post-production of Anatomy (she had previously worked on The Lord of the Rings in New Zealand), was attracted to the project because she was impressed with Hooper. "You have an intelligent man who is presenting information in a very intelligent, engaging way. It doesn't come across as being an out-of-your-mind conspiracy sort of presentation. Instead, he makes a case that's worth having a dialogue about."

David Debiasi, a friend of the firm's art director Howard Bolitho, said the scientific evidence was what he found most persuasive. "The footage that points out the squibs, as they called it, was obvious to me this time; I had never noticed them before. And the other part that put it to bed for me was the news broadcast where they were reporting the collapse of WTC 7 before it actually happened."

Detroit engineer and AE petition-signer Kris Rytlewski called the film "absolutely phenomenal. Hooper knocked it out of the park. The information he used from your film," said Rytlewski, referring to AE911Truth's 9/11: Explosive Evidence—Experts Speak Out, "combined with his own research and the experience he went through with his wife — and the same experience I had with my wife and am still having — this will turn the tide, I believe, for people to wake up in a softer way" than by being hit over the head with more hard-hitting methods upon which other films depend.

In Houston, about 50 people came out to Bayland Park Community Center on September 11 to see Anatomy receive its first public screening in that city. Following the film, a brief question and answer period was held.

Dan Barnum, one of the organizers of the event and a member of Houston 9/11 Truth, says the film was very well received by the audience, which included five or six attendees who were not familiar with the 9/11 evidence presented in it.

Barnum's own review: "I like the way Hooper presented his step-by-step process of falling down the rabbit hole. It was done very convincingly."

Another Houston event organizer, Ken Freeland, says that the difficult challenge for the 9/11 Truth Movement lies in whether it can evolve beyond preaching to the choir to reach the broader public.

The film was also screened in Oakland on September 11 as part of the 9/11 Truth Film Festival. Hooper was in attendance to introduce his film. Volunteer Lori Fohl collected written reactions from audience members for this article.

Richard Conn of Berkeley said he identifies with the film because, like Hooper, he has friends who don't want to deal with the implications of 9/11 Truth. Watching their reactions of denial and apathy has helped Conn better understand how the Nazis got away with what they did, because the German people didn't want to know the real story.

Drew Lewis of Santa Cruz found the film "refreshing." He particularly appreciated Hooper's personal journey and said he believes people will relate it to their own confrontation with the 9/11 evidence.

According to David Paul of San Francisco, Anatomy is a good mix of evidence and primary sources and gives the movement another tool to encourage others to question the official story of 9/11.

Another viewer, Marilyn Garrett of Aptos, thought that the way the filmmaker presented his story was "fascinating" and found the film "well done."

The screening in New York City of The Anatomy of a Great Deception was one of the WTC anniversary highlights in the city where it all began — on September 11, 2001, at 8:46 AM, to be precise, when the first plane flew into the North Tower.

With Gage introducing the film, an audience of about 135 had the opportunity to discover — or rediscover — the scientifically provable theory that the World Trade Center towers were brought down in a controlled demolition as they followed David Hooper's awakening to the evidence.

"It was not something he could understand in one sitting — it was going to take some time," Gage said of the filmmaker. "As he notes profoundly in the film, 'Something big and strange was coming into view, seemingly coordinated and almost invisible, and then dumped out before me like a thousand puzzle pieces.'

"After David finally realized that the three towers must have been brought down by controlled demolition," continued Gage in his introduction, "he came to this awareness: 'I had taken my first step down the rabbit hole. Little did I know how much deeper it would go.' Watch your own mind and its tendencies during your exploration of these issues. After tonight, I'm sure that you too will find that you’ll have hundreds of questions swimming through your head. This is one of the marvelous signs of the open mind that we're inviting you to maintain during your own personal inquiry into the ever-unfolding truth about 9/11.

"This stuff's not easy for anybody. Actually, the film paved a way for all of us. It's an easy-to-watch film that's bound to alert hundreds of thousands more to the dog that didn't bark in the crime of the century."

Get your copy of the DVD today — and share it with everyone you know. You'll be surprised how many new friends you might make.

Craig McKee is a journalist and the creator of the Truth and Shadows blog.