The idea of having a 9/11 Truth billboard in Times Square was once just “pie in the sky,” says Les Jamieson, New York City's point man for Architects & Engineers for 9/11 Truth. But today it’s a reality that Jamieson believes is bigger and more significant than anyone could have predicted. 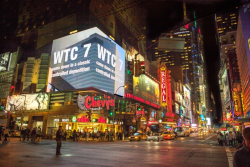 “It’s unbelievably dramatic when you see it and read it,” he marvels. “The whole message is powerful.

“In the past two years we’ve thought, ‘Wouldn’t it be fantastic if we made a billboard in Times Square where there’s all this commercialism, showing the collapse of Building 7, never thinking it could ever happen.’”

The 89-foot-wide and 45-foot-high video screen in Times Square will show passersby — both pedestrians and motorists — the 9/11 demolition of World Trade Center 7 every three minutes from now through early October. AE911Truth raised the funds from hundreds of supporters to pay for the ad space. The advertising agent estimates that 100,000 people will see it each day. That's a total of 3 million between the September 8 start date and the October 8 end date. The ambitious project is a continuation of last year's Rethink911 campaign, with its massive billboards and other public ad formats in cities all around the world.

Jamieson says the current campaign blends perfectly with the theme of the 9/11 anniversary symposium — “The 9/11 Truth Awakening Goes Mainstream” — that was held September 13 in New York City. “Times Square is pretty mainstream, don’t you think?” he queries.

“Right in the midst of a crowd of corporate commercialism, who would think that we would be able to get that message out? That’s incredible. You would assume that it would be censored and blocked.” The screen is owned by CBS Outdoor Americas, Inc., an advertising arm of CBS Corp.

Originally, AE's plan was to have a large print billboard erected directly across from the offices of the New York Times. But the original ad space became unavailable at the last minute. The AE team's initial disappointment was allayed when they realized that the digital billboard at the corner of 8th Avenue and 42nd Street — only a block away — was an even better venue.

The thousands of people — both tourists and native New Yorkers — who stream through Times Square daily “will see the video,” notes Jamieson. And one block away, he adds, is the Port Authority Bus Terminal, so all those bus passengers commuting in and out of New York will see it.

AE911Truth founder Richard Gage, AIA, pumped up the video billboard at the September 11 NYC screening of The Anatomy of a Great Deception: “Eighty-nine feet wide, 45 feet high, this billboard wraps all the way around the corner. Everybody driving into the Lincoln Tunnel has to see it.”

Still more attention was brought to the billboard at the September 12th rally, where dozens of activists handed out ReThink911 and 9/11: Good for America flyers in Times Square, all the while pointing up to the huge sign in the sky and engaging an attentive public in conversation about 9/11. According to Jamieson, "The response was excellent and the exercise very effective in reaching average people.”

Jamieson urges members of the 9/11 Truth Movement to get the word out about the billboard: “I’m calling on the entire 9/11 Truth Movement to get the online link to this billboard and blast it far and wide,” he pleads. “Do whatever you have to do to send this viral. Social media, groups you belong to, your contacts list, peace groups, environmental lists, political parties — whatever means you have of spreading awareness of this billboard.”

Craig McKee is a journalist and creator of the blog Truth and Shadows.