To call it unlikely would be an understatement.


A work of art that challenges the official account of 9/11 has been accepted into the permanent collection of the 9/11 Museum in New York City. And surprisingly, the piece was created by an artist who is best known for his illustrations in the mainstream media.

Anthony Freda — who has contributed provocative political art to publications like The New York Times, Time, Rolling Stone, Esquire, The New Yorker, and Playboy — says he has no idea why the museum would accept his painting, titled "9-11 Questions." 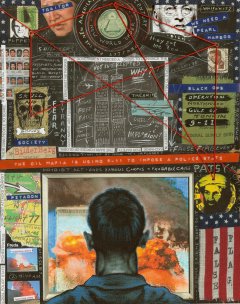 The original "9-11 Questions" by artist Anthony Freda is now owned by the 9/11 Museum, though it is not clear whether its curators intend to ever display it in public.

"I still can't figure out what is in the museum's mind letting me in there, because literally every part of my being is fighting against the official narrative that they are trying to promote," he said in an interview. "The thing that fascinates me, and they admitted this, is that this is the only piece in the entire collection that questions the official narrative in any way."

Freda met with museum staff for 90 minutes to donate the art and to answer questions about the images it contains. The entire exchange was filmed for a documentary called Behind Truth Art, which is planned for release in 2015. (This 30-minute preview shows highlights of the meeting.)

Museum officials told Freda that "9-11 Questions" will rotate with other works on display and that it may also be included in traveling 9/11 art shows organized by the museum. But he concedes that museum officials, now that they own it, can do whatever they want with the piece — including locking it in a vault forever.

Freda created the work eight years ago, when The Village Voice commissioned him to illustrate its article "Fakes on a Plane," which was intended to "gently make fun" of online 9/11 documentaries like Loose Change and the people who believe them.

The assignment led Freda to research the subject of 9/11, and he reached an unexpected conclusion — that those who were challenging the official story are actually intelligent, serious about their research, and willing to make personal sacrifices to stand up for the truth.

"Oh my God, these guys aren't crazy like I thought," he recalls saying to himself. "Why would they put their careers on the line to get this information out when they have everything to lose and nothing to gain?"

Thus began Freda's personal journey of discovery. The more he explored, the more convinced he became that the evidence put forward by the 9/11 Truth Movement is scientific, factual, and undeniable.

"I didn't go into this willingly or easily, but when you're presented with all the evidence, you can only stick your head in the sand so long. The more I look into it, the more the evidence becomes reinforced. It just gets stronger and stronger, and you can't tear it apart."

Freda says he also came to understand how much of a price the world has paid as a result of the 9/11 deception: wars, millions dead, a police state, and a pervasive feeling of fear, hysteria, and paranoia.


Freda admits to biting the hand that feeds him. "A lot of the publications I've worked for are the same people who promoted the lies that took us to Iraq and reinforced the official narrative [of 9/11]. I have a foot in both worlds. When I get some assignments from mainstream media, I try to use those assignments to get some truth messages in there. They have the right to say what they want to say, and we have a right to say they are lying."

Behind Truth Art director John Massaria will be using the work of Freda as the focal point of his film, which he hopes will be upbeat, not heavy or preachy. "Through this, we're trying to say to people, 'What do you think about using art to wake up people?' Art transcends words and language, and it kind of takes all those barriers down."

Freda agrees: "The movie's not just about me, it's about activists and artists and people who are trying to come up with creative ways to get these messages out there."

Interviewees for the film include William Binney, Gerald Celente, Richard Grove, Adam Kokesh, Peter Kuper, Lee Camp, and a number of other thinkers and activists.

Massaria says that once Freda's 9/11 piece was accepted, the museum gave him permission to bring in a film crew to document the artist donating his work. But after the film had been shot, museum officials had a change of heart. "What's curious is they really didn't want us releasing that footage at all; they tried to backpedal."

At that point, Massaria turned for legal advice to Architects & Engineers for 9/11 Truth founder and CEO Richard Gage, who referred him to a team of lawyers. They confirmed that a film documenting the museum staff accepting Freda's donation would not be cause for a lawsuit. If it came to that, though, it would "look pretty bad for the public relations department [of the museum]," Massaria observes.

"It just brings up another side of the story. And if you can't have both sides shown, then the museum's a fraud."

The director couldn't have scripted things any better: Filming Freda being questioned about his work of art for an hour and a half ended up being much more interesting and revealing than if the staff had said a simple "thank you" for the gift.

Massaria says he was told that the museum has also had several 9/11 Truth films donated by their directors, but that these films will remain in the museum's internal archives. He says he hopes the public will demand that Freda's "9-11 Questions" be exhibited.

"It just brings up another side of the story. And if you can't have both sides shown, then the museum's a fraud."

A major obstacle to the film being finished is funding. A Kickstarter campaign brought in $3,500, but more money is needed to complete it. Anyone interested in contributing to the effort can email the filmmaker [here].