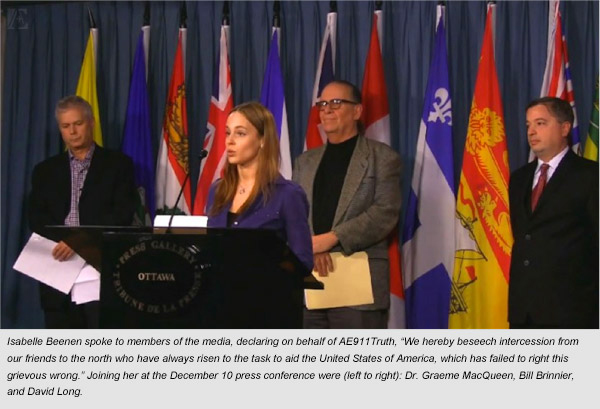 This is not the first time that Architects & Engineers for 9/11 Truth has published news on the three-year effort to present this petition to the Canadian government. Back in February 2012, we reported that the petition for a parliamentary review of the destruction of the three WTC skyscrapers on September 11, 2001, had been given to members of Parliament in the hope that they would formally present the petition in the House of Commons. However, officials were not yet ready to tackle the numerous unanswered questions about 9/11. Again, in March 2013, we reported that a renewed effort to have the petition read in the House of Commons was impeded by Ottawa MP and foreign affairs critic Paul Dewar, because he "did not agree with it." Still not ready.

A major development finally unfolded on December 3, 2014 when a Member of Parliament rose in the House of Commons "to present a petition, from petitioners in Alberta, British Columbia, Ontario, and particularly in the Ottawa area, calling on the government of Canada to conduct a parliamentary review into the events that occurred in the United States on September 11."

Mainstream media quickly picked up the story, predictably labeling the petition "a call to support a conspiracy theory." Also unsurprisingly, the MP came under fire when she insisted that it was her duty as a Member of Parliament to present the petition to the government, even though she "does not agree with it."

"The Canadian government can and must reset the course of history." — Isabelle Beenen

Seeing — and seizing — an opportunity to speak to the nation, activists from across Canada responded swiftly. Elizabeth Woodworth of the 9/11 Consensus Panel and David Long of ReThink911 Canada organized a press conference, which was held at the parliamentary press gallery on December 10. Long, author of the petition and a 9/11 survivor, hosted the event and introduced three speakers, each of whom presented powerful and moving statements. Isabelle Beenen read the statement on behalf of AE911Truth; Dr. Graeme MacQueen represented the 9/11 Consensus Panel; and Bill Brinnier spoke on behalf of 9/11 victims and their families.

Media response following the press conference was quite a mix. Global News presented a full minute of Dr. MacQueen's statement addressing deficiencies in the official 9/11 investigation, including the fact that testimony of over 150 eyewitnesses who had seen and heard explosions on 9/11 had been ignored. Other news sources provided the usual response, including assertions that "the official report explains that the molten metal [flowing from the South Tower just minutes prior to its collapse] was aluminum from the plane" – even though it couldn't possibly be so.

Brinnier, a New York architect whose best friend, World Trade Center construction manager Frank Di Martini, was killed in the North Tower, traveled to Ottawa from Kingston, New York, to make a plea on behalf of all of the 9/11 family members: "I am here today because, like so many other people touched by this unthinkable tragedy, I know that the official story of what happened on that day simply does not add up, and I want the truth." Later, in the Q&A session with reporters, Brinnier, who is a board member of the New York City Coalition for Accountability Now, reiterated, "To believe that simple office fires could cause the collapse of a 47-story office building — that's impossible." He vowed to continue fighting for the truth about 9/11 "as long as I have breath in my lungs."

Dr. MacQueen, a retired professor from McMaster University in Hamilton, Ontario, as well as founder and former director of the Centre for Peace Studies and author of the recently published book, The 2001 Anthrax Deception: The Case for a Domestic Conspiracy, noted, in response to follow-up questions after the press conference, that even a dismissive response to the petition from the Canadian government would not mean this historic initiative had failed. "It's all part of the contest, which is heating up," he observed.

Beenen, who has become one of the most active ReThink911 Canada supporters, presented AE911Truth's case that "a thorough investigation by the Canadian government can and must reset the course of history and bring about a future of peace – based on a solid foundation of truth and justice. You are not alone. You have the full backing of not only the thousands of licensed/degreed architects and engineers for 9/11 Truth, but millions of citizens around the world who are aware of the truth about 9/11."

"It's all part of the contest, which is heating up." – Dr. Graeme MacQueen

September 11th survivor David Long, who heard the explosions, recalled, "I saw . . . within the first minute or two . . . streams of molten metal coming out of the buildings. I thought there were bombs in those buildings. Everything I saw told me that there were bombs."

"The government of Canada would be saying it is acceptable to insult the victims." – David Long

He also explained that because "the US Senate released a report on CIA torture the same day [December 10], we touched on that in the press conference, since evidence obtained through torture was used to make the government's case in the official 9/11 report. This critical information means that apparently Canada accepts evidence obtained through torture, since it accepted the official account of 9/11 given by the US government," commented Long — despite the fact that such evidence is not considered reliable in any court of law. He went on to say that any response from the Canadian government that dismissed the significance of the evidence presented to Parliament would conflict with the fact that 9/11 victims themselves presented the petition. "In effect, the government of Canada would be saying it is acceptable to insult the victims."

The Canadian government is required to reply to a petition within 45 calendar days of its presentation. Absent a reply, a committee designated by the MP who presented the petition is required to investigate the failure to respond. Perhaps Canada is now ready to grapple with the truth about 9/11.