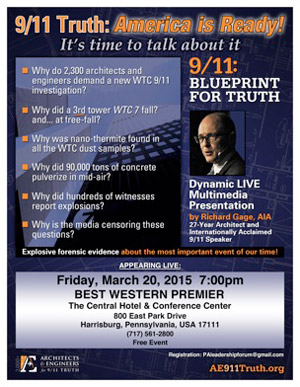 If the official account of Flight 93 — the only hijacked airplane said to have crashed into the ground instead of a building on September 11, 2001 — is dependable, then the United Airlines jet flew across the skies over Pennsylvania that morning creating a firestorm of controversy among local 9/11 truth activists, who are demanding answers to the mythical accounts of all four flights.

In the thirteen years since, many Pennsylvania citizens have joined the quest for the truth about that fateful day. Close, careful examination of the evidence has consistently shown that the official accounts are not accurate and that a new, independent investigation is needed.

Their spirit of inquiry will lead these Keystone State residents to attend three live multimedia presentations that Richard Gage, AIA, founder of Architects & Engineers for 9/11 Truth, is giving in Harrisburg and the Scranton area from March 20 through March 22.

The first, on Friday, March 20, will be held at 7:00 PM at the Best Western Premier, The Center Hotel and Conference Center, in Harrisburg.

The Four Points by Sheraton in Scranton is the scene of Gage's second presentation, to be made on Saturday, March 21, at 2:00 PM. The Sanctuary Church in the village of Newfoundland, some 25 miles southeast of Scranton, will host his third and final presentation on Sunday, March 22, at 2:00 PM.

An opportunity for Q&A discussion will follow each event.

“The Pentagon crash was next on the list. The Shanksville event, which took place nearby, was comparatively underreported and poorly investigated," Haldeman continues. "I’m convinced beyond the shadow of a doubt that at all three sites things happened that were very different from what we were told at the time. We're still in the dark about Shanksville, because the mainstream media has not pursued the discrepancies in the official story.” 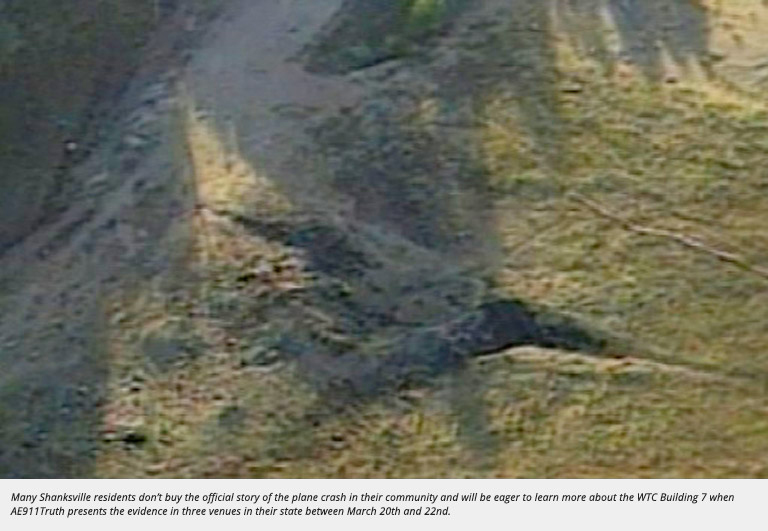 Haldeman and other members of the organization he represents feel that 9/11 “steered world events” in an ominous direction, that it continues to influence national policies, and that it must be re-examined and clarified by a truly independent investigation.

“As did many others on the day of 9/11, I watched the events as they unfolded on TV and was horrified by the collapse of the skyscrapers,” recollects Haldeman, who has a degree in computer science and mathematics and a particular interest in physics and engineering. “It wasn’t until years later, when I was viewing the destruction of the World Trade Center on Internet videos, that I understood that the collapse could not have resulted from jet fuel and office fires. Instantly, I recognized that the official story was incorrect and misleading. That realization sent me on a journey of doing my own research. Though the evidence speaks for itself, it took a while to get accustomed to the fact that the official narrative was an intentional myth.”

Having paid close attention to AE911Truth’s thus-far stonewalled attempts to persuade Manhattan District Attorney Cyrus R. Vance, Jr. to open a new inquiry, Haldeman and his group are now reaching out to Pennsylvania leaders who, they believe, are in a position to examine the evidence, make a sound decision on that evidence, and share their findings with other people of influence.

“Hopefully, with everyone we reach, there will be enough of a groundswell to call for action,” Haldeman adds.

“Even though Richard Gage will be discussing primarily the destruction of the Twin Towers at his presentation here, it's possible that, since we’re in Pennsylvania, we will also be demanding a new investigation of Shanksville. In that case, we would want to address the leadership in our own state government. If word of our efforts gets publicized across the nation and the world, perhaps other groups and political leaders will realize the utter necessity of reinvestigating the 9/11 events in Washington, D.C., and New York City.”

The logic for local leaders having legal jurisdiction to pursue the facts of the Shanksville crash echoes the spirit of a petition presented to authorities in the neighboring state of New Jersey. Authored by defense attorney, retired policeman, and New Jersey 9/11 Aware founder David Meiswinkle, the petition requests an independent investigation of 9/11 by state legislators. “Since the federal government did such a poor and reluctant job investigating, it is incumbent on the states to do a better job with a follow-up,” the NJ911Aware petition reads.

In Scranton, the Great American Speakers Bureau has arranged Gage's two presentations. “Richard Gage speaks with great ability and conviction on a very important topic,” says Lisa Zanin, who is helping arrange the March 21st and 22nd events. “I’ve seen his videos, and they're impressive and convincing.”

“When the 9/11 attacks occurred, people became somewhat paralyzed," Zanin recalls. "From the start, the mainstream media seemed to discourage us from determining for ourselves what was really happening. Everything was ‘taken care of’ for us by our government and the media. Despite being told what to think, though, some of us asked questions right from the start. When we heard that the passport of one of the hijackers had survived the fires, survived the destruction of Twin Towers — survived everything — and had landed in the hands of a government official, I thought, 'Wow, what a time for a miracle!'"

Marking that date as the starting point of enormous changes in the day-to-day realities of life in America, Zanin observes, “We got the Patriot Act and we got NDAA [the National Defense Authorization Act], which allows the President to pretty much incarcerate anyone without due process. These are dangerous things. It seems unreal to me that is happening to Americans and to America.”

Pointing to the conflicting accounts of what happened in Shanksville, the Pentagon and Manhattan, Zanin says that if things didn’t in fact happen as the government reported they did, it should drive everybody to ask themselves, “Then who is responsible for the deaths of all those innocent people?”

Gage's three presentations are free of charge. They will be his last public appearances before he embarks on his third AE911Truth European tour in April.

Please consider funding the 2015 AE911Truth tour “9/11Truth: The World is Ready — It’s Time to Talk About It,” which will include live events in most western European countries. Stand by for details in our next issue of Blueprint. You can donate here now.

For more information on the Harrisburg event, contact This email address is being protected from spambots. You need JavaScript enabled to view it.

For more information on the Scranton area presentations, contact This email address is being protected from spambots. You need JavaScript enabled to view it.