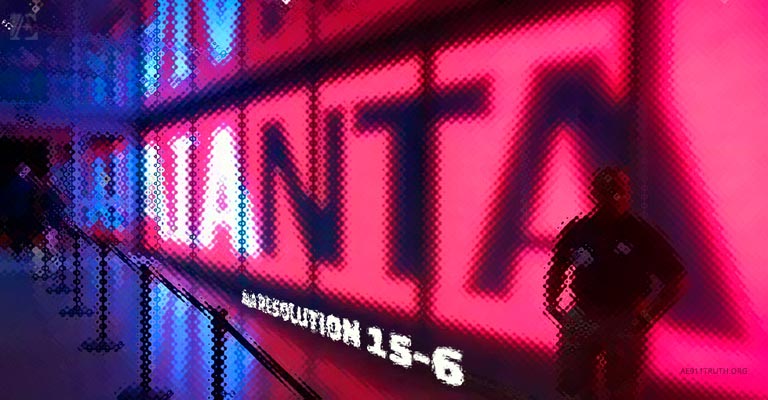 Undeterred by the sound defeat of its Building 7 resolution at the American Institute of Architects annual convention in May, Architects & Engineers for 9/11 Truth is already considering new ways to approach and educate the AIA’s members over the next year. "We think there are possibilities," says Ted Walter, AE911Truth's director of strategy and development. "There are ways to restructure the resolution. There are also ways, in working with people at the local chapters, to come up with more effective strategies for outreach over the next nine-to-twelve months."

He says it is likely that AIA chapters will be consulted for their input on what type of resolution delegates might be more likely to support. It might make more sense, Walter adds, to have the resolution sponsored by a local chapter or state organization of the AIA rather than by individual members. 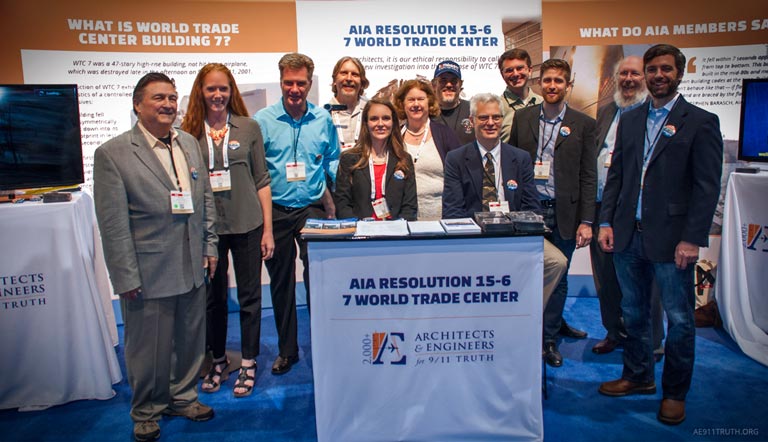 AE911Truth staff and volunteers at this year's Atlanta AIA Convention, working on AIA Resolution 15-6 in our new booth for this year.

Had it passed, the resolution would have resulted in the AIA adopting "a Position Statement in support of a new investigation into the complete collapse of 7 World Trade Center on September 11, 2001." The final vote against was 3,892 to 160. Walter says he does not believe the percentage of delegates who voted for the resolution reflects the actual number of members who may be questioning how Building 7 came down.

"It's clear that a majority of the people in that room were voting not based on a rational examination of what happened to Building 7 but on how they feel and what they want to believe about what happened on September 11th," he observes. "They were more concerned with the reputation of the AIA and were not willing to commit the AIA to taking a position on anything as controversial as the collapse of Building 7."

The first to speak to the delegates at the business meeting against the resolution was the AIA's vice-president, Frank Pitts, who just happened to be the same person who headed the 2014 panel set up by last year's AIA president, Helene Combs Dreiling, to investigate the evidence provided by AE911Truth. The request that the AIA look into the destruction of Building 7 was denied in a letter dated January 6, 2015, and signed by Pitts.

"He told us everything we need to know about how objectively [the panel's investigation] was not done," says Walter.

The letter states that AE "essentially alleges that a conspiracy took place before and after September 11, 2001, involving various government officials," and that AE "alleges that bombs were placed in the World Trade Center buildings before the attacks with jet airliners and that the preponderance of the structural damage and loss of life that day resulted from bombings, not the impact of the jets and subsequent fires."

In his remarks to delegates, Pitts repeated the false accusation that those proposing the resolution were saying that a conspiracy had taken place involving the U.S. government.

"They had an agenda from the beginning," Walter says. "Their goal was to dismiss the evidence that we were putting forth." AE petition-signer Richard Wallace, an AIA delegate who was also one of the resolution’s sponsors, addressed the meeting and asked fellow delegates to look at their responsibilities as architects rather than making the safe, political choice. 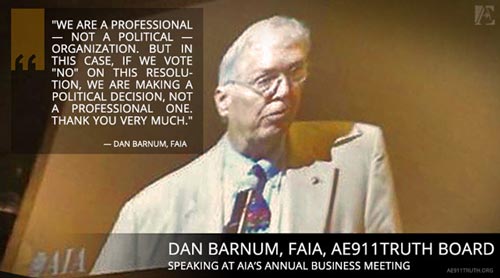 AE911Truth board member Dan Barnum, was the resolution's primary sponsor. He concluded his remarks to the delegates by saying that a vote against the resolution is a political vote, not a professional one. While he says he is disappointed with the magnitude of the defeat, he points out that this is the beginning of a process of sensitizing his fellow architects to the issue.

"I think we also got people to thinking," he explains. "And if we can keep this message going and keep the pressure there, one way or the other, people will continue to think, and at some point we’ll have a systemic change."

"They don’t want to get on somebody's dark side; that's what they're afraid of," Barnum asserts. "A true professional will go against the flow if it's necessary for integrity."

Damon Smith, another sponsor of the resolution and a signatory of the AE petition, says the deck was stacked against the initiative from the start.

"I don’t think it would be controversial to point out that the minds of the majority of the delegates and the attendees were made up ahead of time," he contends.

"The only way you can break down a psychological block is with two people as peers trusting each other and talking it through in a relaxed tone. And that means it's not adversarial. It has to be as a friend. We don’t have to agree, but we have to respect and we have to value each other's opinions."

About 150 architects stopped by the AE911Truth booth at the convention to sign either the AE petition or a statement of support for the resolution. Approximately one-third of them signed both.