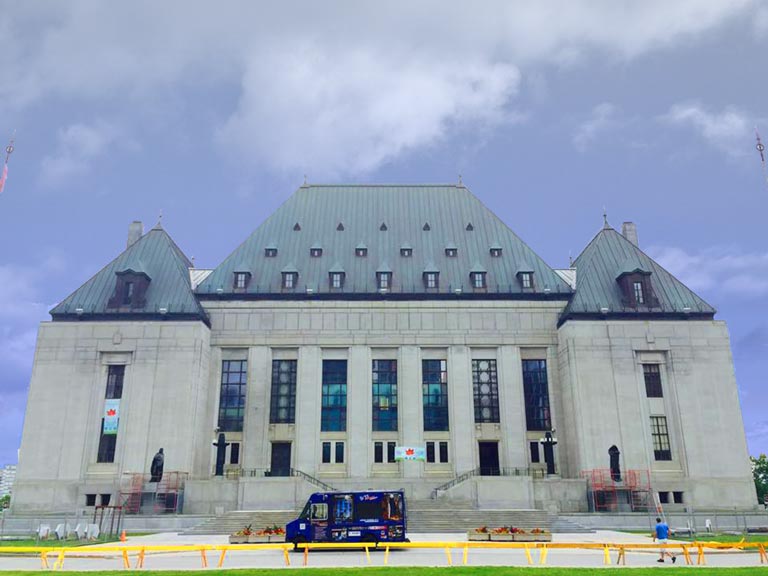 The 9/11 Truth Truck makes its presence known in front of the Supreme Court of Canada.

Have you seen the 9/11 Truth Truck rolling down the highway in Canada yet?

On June 15th, the truck's drivers, Sean Woydon and David Harnden, set off from Vancouver on a month-long tour of Canada. In each of the 14 cities on the truck's itinerary — including Calgary, Winnipeg, Toronto, and Ottawa — local 9/11 Truth volunteers have been eagerly awaiting its arrival. They haven't been disappointed. The two "truth truckers" have warmly engaged passersby in conversation and enthusiastically educated them about 9/11.

The idea for the Canada 9/11 Truth Truck was conceived — in a "light bulb" moment — by a Vancouver businessman who first heard about the 9/11 controversy a mere two years earlier and quickly became one of the movement's dedicated advocates. 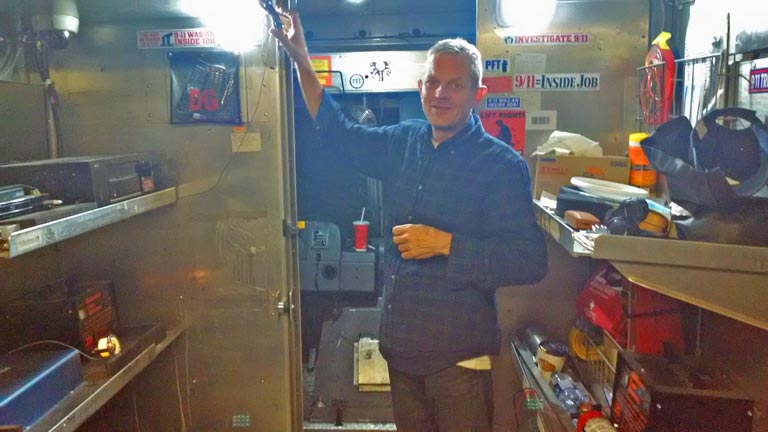 This unnamed "Edison" tells the story of his awakening to 9/11 Truth: One day in 2012 he was scrolling randomly through YouTube videos. Suddenly, up popped the recognizable face of Hollywood actor Ed Asner, who was introducing Solving the Mystery of World Trade Center Building 7, a documentary produced in 2011 by Architects & Engineers for 9/11 Truth.

His interest piqued by Asner's narration as well as by the credible comments about Building 7's destruction made by the architects and engineers featured in the film, this businessman headed straight down the "rabbit hole." (This expression describes the confusion usually experienced by those who stumble upon the hard truth that the official story of 9/11 bears no resemblance to reality — and who subsequently tumble down the research hole in a mad effort to ferret out the real facts.) 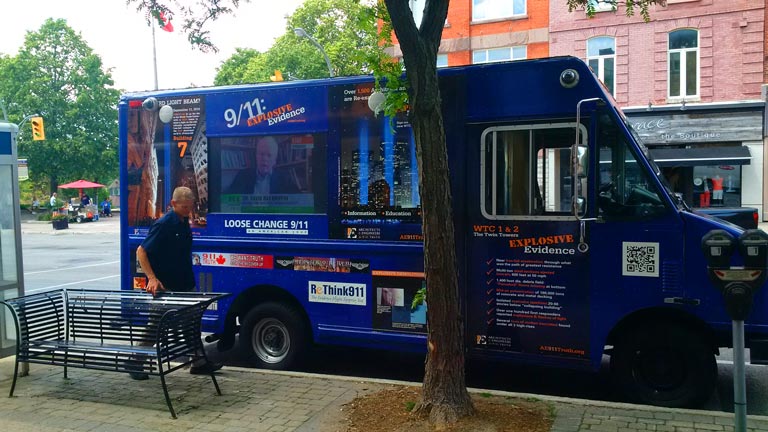 It's not far-fetched to say that the out-of-the-box businessman felt like he was joining Alice in her unconventional adventures in "Wonderland." Nor is it a stretch to add that he finally understood the meaning of Galileo's maxim, "All truths are easy to understand once they are discovered. The point is to discover them."

So, having been inspired by the Asner film and motivated by his ensuing discoveries, the businessman was supercharged by the time he happened upon ReThink911 Canada in early 2014. Energized by that team's activism, he bought a retired UPS delivery truck and converted it into a moving theater. On both sides of the truck he mounted flat-screen TV monitors that simultaneously play looping 9/11 Truth videos. He made sure that the stereo speakers on each side allow anyone viewing the videos to hear the 9/11 Truth message loud and clear. And he literally blanketed the truck's entire body with eye-catching 9/11-related photos and text.

Just as he envisioned, the van has been veritably transformed into a vehicle that delivers the truth directly to the masses. Before embarking on this summer's travels, the Truth Truck spent a full year roaming the streets of Vancouver five days a week. In that time, it parked at all of the city's landmarks, where curious tourists congregated and asked questions. 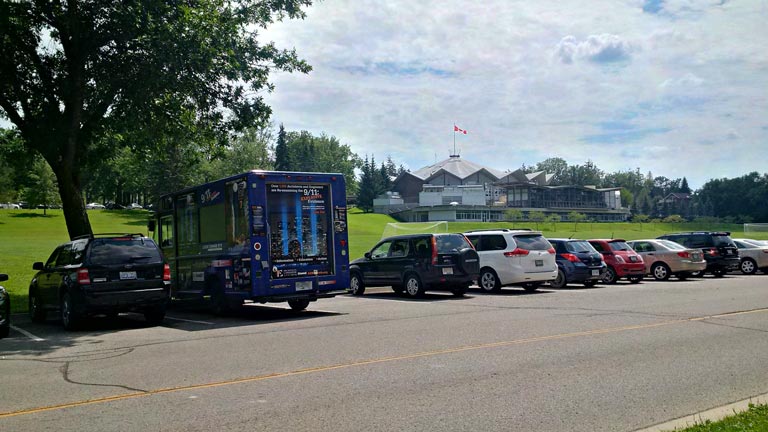 The public's receptivity to the truck mirrors the reaction that the same activists see when they do individual outreach on foot. With or without the truck in tow, they observe that people who are ready to accept the truth of 9/11 look as if they've just been splashed in the face with cold water and are suddenly wide awake!

When the touring Truth Truck stopped in Stratford, Ontario, on June 25th, a 9/11 activist on the scene expressed concern over the paucity of pedestrian traffic. The truck's drivers assured him that, judging by passing motorists' reactions, the conspicuous vehicle has made a big impact when it travels from one point to another on Canada's highways and byways.

As one activist puts it, "The ripple effect of the Truth Truck is significant. Its unique look and important message make a lasting impression, even if it receives only a fleeting glance from drivers and other occupants of the thousands of vehicles sharing the roads with it."

One fact that Canadians and Americans alike are coming to grips with — and that helps them relate to the Truth Truck — is that "the events of 9/11 have been the impetus for almost 15 years of wars," notes ReThink911 Canada co-founder James Macdonald. "Millions of people have been killed, tens of millions have been displaced, and billions have been caught in a massive game of fear and distraction. And that's not to mention the trillions of dollars spent by governments bent on keeping their official narratives and agendas pointed down the road to destruction." 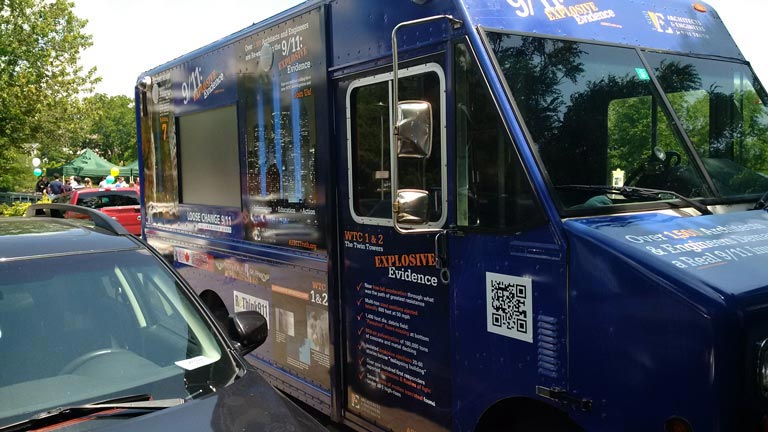 The verdict among 9/11 Truth leaders is in: The Truth Truck not only rolls, but it rocks! 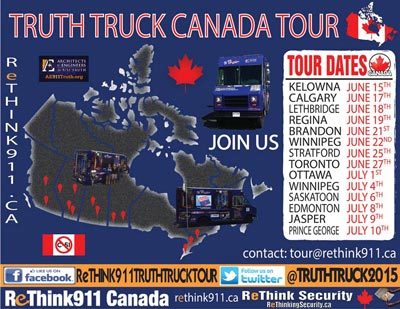 AE911Truth founder Richard Gage, for example, admits to being proud of the Canadian 9/11 Truth activists and their latest creative outreach strategy. "The Truth Truck is one of the most effective ways to reach thousands of motorists and pedestrians," says a beaming Gage. "Also, it has inspired local activists to come out and educate the public about what really happened to the three World Trade Center high-rises on 9/11. We love our dedicated supporters to the north!"

Canadian Elizabeth Woodworth, co-founder and coordinator of the 9/11 Consensus Panel, sees the Truth Truck as "a handsome and compelling reminder of what many in society unconsciously suspect but do not dwell upon or act upon — namely, that there are shadowy forces behind our democratic process that maneuver foreign and military policy, in particular, for reasons of imperialism and profit."

Hollywood's iconic actor Ed Asner, who, as narrator of Solving the Mystery of WTC 7, is indirectly responsible for the creation of the Truth Truck, reflects on its important mission: "There are many truths yet to be revealed in America — nay, the world. Finding out what really happened on 9/11 is certainly a world-changing attempt to get at the truth. And this little 'ole truck is a key to that truth."