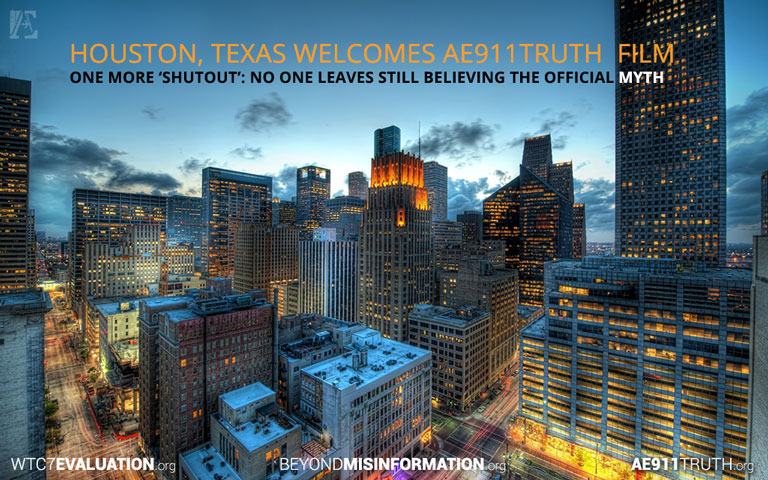 Huge thanks goes to the Houston crew under the consistent leadership of event coordinator Jackie Carpenter, who placed us in the spacious Bayland Community Center, where 57 people came out to see Firefighters, Architects & Engineers: Expose 9/11 Myths. 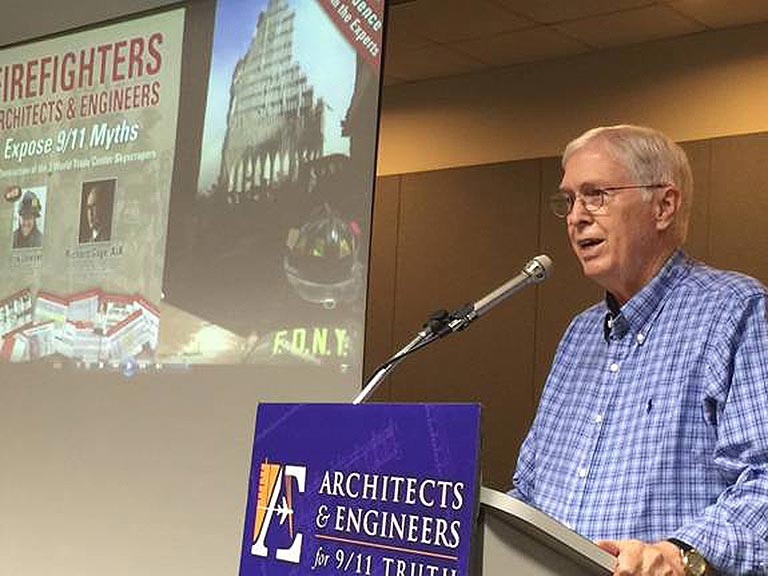 Dan Barnum, FAIA, who has 51 years of experience designing Houston-area structures, including several high-rises, became a member of AE911Truth the first day he heard about its existence. Later, Barnum said, “I gratefully accepted the position on the board of AE911Truth. It's been an honor to serve on it and to be a part of the decision-making process for this organization.”

When introducing AE911Truth founder and fellow American Institute of Architects member Richard Gage to the audience, Houston's Dan Barnum told them that on the morning of 9/11 “I immediately knew something was wrong. I knew about high-rise buildings, having been a part of the design team for several, and I knew that an airplane running into one wasn’t going to cause it to collapse. I knew that fires weren’t going to bring them down. I’ve been a skeptic ever since, especially after reading some of the government reports, at which time I said to myself, ‘I can’t put up with this anymore,’ and I quit reading. . . . We need the truth about 9/11, and AE911Truth is the best vehicle for that.”

No one left the Houston Bayland Community Center still believing the official narrative of the destruction of the WTC Twin Towers on 9/11.

One eager supporter offered this praise: “Of the four films you’ve done, I think this is the one that is going to motivate the public best, and I want to congratulate you on that.” He then added this admonition: “I do want you to be more open-minded on the subject of nuclear weapons used to destroy the World Trade Center.” Of course, we at AE911Truth are no strangers to theories promoting weapons even more exotic than nano-thermite. In fact, we recently completed our FAQ on whether nuclear weapons were used at the WTC. (Our FAQ on Directed Energy Weapons, a third popular hypothesis about the WTC's destruction, has been available for a few years now.)

Another gentleman asked why the explosive nature of the Towers appeared to be so different from the implosion of WTC 7. Gage speculated that, “There may not have been enough access to the perimeter structural steel system in the Twin Towers to place the explosives, so they might have been forced to use massive amounts of explosives in the core, where they probably had access through the elevator shafts during the nine-month-long elevator modernization preceding September 11, 2001. The explosives in the core may have necessarily been strong enough not only to take out the core of the building but the perimeter as well — resulting in a very explosive event hurling four-ton perimeter wall units at 60 mph laterally, which landed up to 600 feet in all directions.”

After the film, several viewers offered their reflections. Barnum, for one, thought the film’s depiction of “the revelation of the breaking of the NFPA rules was extraordinarily valuable.” To Rhett Micheletti, “The truth matters to me more than anything else. I have some religious beliefs which obligate me to pursue the truth. It was seeing so many myths debunked all in one place [in this film] that impressed me the most. And I think that is the thing that is most important for people who are new to this information.”

An attendee named Lucy indicated she doesn’t know where it is all going to end. She’s aware that the implications of the controlled demolition of the WTC are even far worse than the crime itself. (While AE911Truth focuses on the scientific forensic evidence and eyewitness testimony, our mission statement includes support for those pursuing justice on behalf of the victims and family members of 9/11.)

Jackie Carpenter, Public Access TV team leader in Houston for AE911Truth, found it “alarming that you could have 2,350 architects and engineers and have them be so marginalized by the media. It scares me.” The silver lining in the movie, remarked Carpenter, was Eric Lawyer's character: “He comes across as a very decent human being. I‘d love to have him as an uncle or a brother.”

“People don’t want to believe what the architects and engineers are saying because of what the implication is,” said Rick Trevino. “They want to continue living in their same world. Otherwise, it’s too challenging for them. That’s the hardest part of the work for us — getting people to open their mind and to accept another reality.”

So that’s our snapshot from Houston. Next we headed to Denver for our final stop!