Our final stop on the Southwest tour brought us back into the capable hands of one of the more consistent and successful 9/11 Truth groups in the country — Colorado911Truth in Denver. The group’s dedicated leadership team of Fran Shure, Marti Hopper, and Earl Staelin worked hard and long to make this stop the most successful on the tour numbers-wise. Of the 196 attendees, four believed the official narrative of the Twin Towers' destruction before seeing the film; 21 were unsure. After the film, though, only one still believed the government's narrative and a mere three remained unsure. (There were three architects and eight engineers attending.)

Colorado 9/11 Truth activist and event co-coordinator Earl Staelin introduced the audience to the difficult subject of the film they were about to see and discuss. 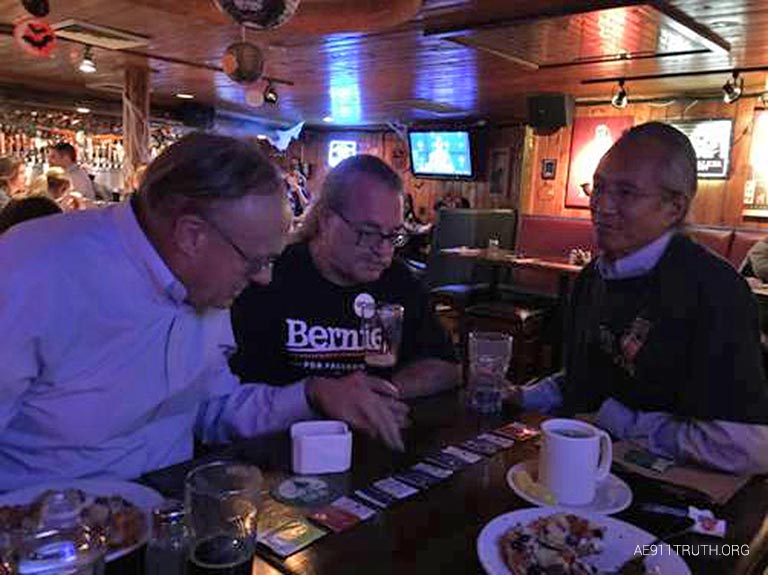 A Denver 9/11 Truth activist named Joseph (right) tried to convince debunker Chris Mohr (left) that in order to believe that Building 7 could come down at free fall without explosives, you’d have to also believe that race car “A” could achieve the same acceleration as car “B” even though only car “A” had to plow through 10 other cars on the way to the finish line. His analogy shows the absurdity of WTC 7 free falling due to normal office fires, which would have had to somehow “remove” every one of the 80 columns in the building. Chris Mohr, the lone believer in the official conspiracy, was in the crowd. He has spent considerable time debating AE911Truth at various venues, including this Boulder, Colorado, debate and the online debate at ChrisMohr911.com. Gage passed along to Mohr the queries from audience members who wanted to know how supporters of the official story respond to questions posed to them by the 9/11 Truth Movement. 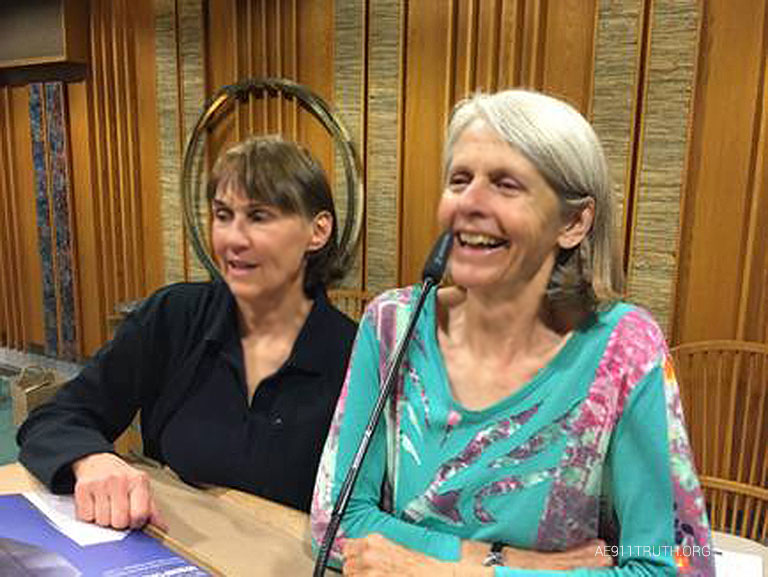 Marti Hopper (left) and Fran Shure, two psychologists from AE911Truth's landmark documentary 9/11: Explosive Evidence – Experts Speak Out, answered questions about the incredible difficulty most people have accepting the evidence, which, because of its implications, threatens their world view.

For example, Mohr was asked to answer, “How could Building 7 come down at free fall for any period of time without explosives?” He theorized that if the inside of the building fell first and then dragged the exterior down with quite a “tug,” it could come down in this fashion. Gage commented that such an event would produce massive warping of the exterior perimeter structural steel system and consequent massive breaking of the granite panels and windows — none of which was seen.

The Southwest tour brought many activists together who had never met. They brainstormed numerous ideas during the lengthy and intense Q&A after each showing of the film. They were deeply moved by Erik Lawyer's personal story and appreciated his perspective on the NFPA manual for investigating fires and explosions as well as his role in exposing the 20 common myths. They now look forward to networking and developing strategies to enhance the effectiveness of their Local Action Groups.

If you feel similarly inclined and motivated after reading about this tour, please join AE911Truth as a member today and do your part!