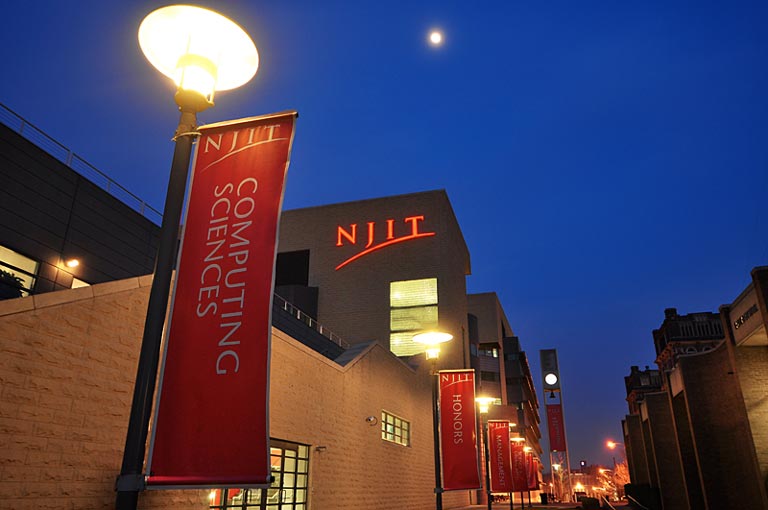 The first stop in our twelve-city tour of the Northeast was an unprecedented opportunity to speak at a university-sponsored forum about the controversial seven-second destruction of the 47-story World Trade Center Building 7. The event, held on Wednesday afternoon, November 11, at the Newark-based New Jersey Institute of Technology, was titled "9/11: Critical Questions." It was sponsored by the NJIT's Technology, Art and Science Forum Committee; the John A. Reif, Jr. Department of Civil and Environmental Engineering; and the NJIT chapter of Sigma Xi. 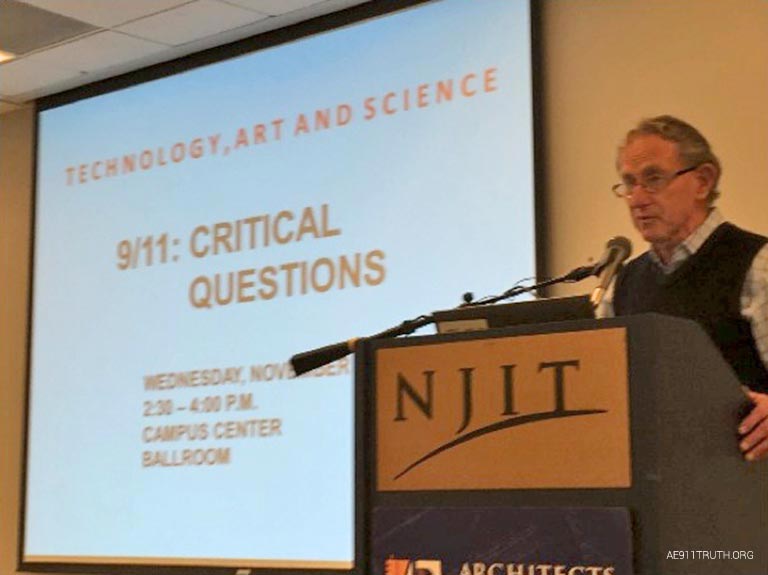 Professor Jay Kappraff took heat from several New Jersey Institute of Technology colleagues about his refusal to believe the 9/11 official narrative and his insistence upon holding the "9/11: Critical Questions" forum. He maintains: “This is the environment for expressing the technical aspects of 9/11 — the place to invite all sides and to discuss all sides. That's part of our education." 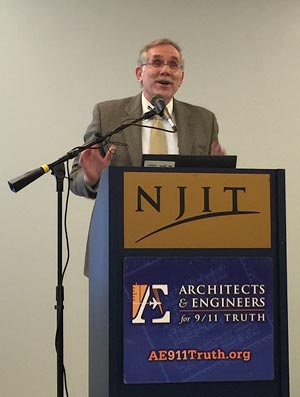 John Schuring, PhD, PE, professor of civil and environmental engineering at NJIT, led off the 90-minute forum. In his opening remarks, he observed, “Today, we are going to respectfully set aside the human tragedy of that day. Instead, we're going to don the cap of a technical investigator — be it an engineer, an architect, a scientist, or an interested party. What better place is there to do this than at NJIT — the state's science and technology university. Our specific focus will be the cause or causes of the collapse of World Trade Center 7 on September 11th.”

During his allotted time of 15 minutes, Schuring cited the basic tenets of the National Institute of Standards and Technology report on WTC 7, then explained why he found NIST's analysis and conclusion of fire-induced collapse reasonable. (Interestingly, after two AE911Truth speakers presented evidence contradicting his thesis, Professor Schuring held to his belief in NIST, while all 66 students present voted for a new investigation of WTC 7.) 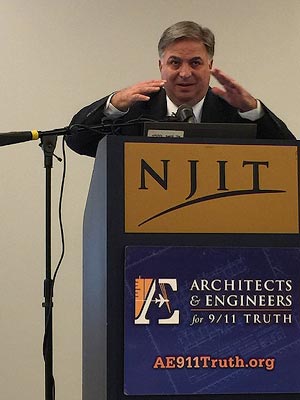 Next up was AE911Truth's first spokesman, Tony Szamboti, a mechanical engineer whose career has focused on structural engineering. He spoke for 30 minutes.

When asked why some of the other professors at NJIT have gotten upset and called the AE911Truth group “conspiracy theorists,” Szamboti responded, “I would stop saying that. It needs to be talked about [as] a structural engineering matter. . . . If somebody wants to say it's a conspiracy theory, it's incumbent on them to show why that's true. We're showing technical details here, and the more this [kind of presentation] happens, the more it will be discussed, and ultimately we'll get to a resolution.”

Szamboti told his audience, “[T]his says the building came down by fire, as the professor showed, so we're being given an opportunity to discuss this rationally and hopefully objectively and without emotion. Let's . . . see if NIST proves their story, and with a little more information than what the professor showed you. Some discussion topics are: lack of public knowledge, video record of the collapse, collapse of the Twin Towers, the fires in the building, our experience with fires in high-rises, and the investigation conclusions of the most likely cause of the collapse.”

After going through these six issues in more detail, Szamboti summarized, “We talked about Building 7 — about some of the key problems with the NIST report, [such as] that fires have never brought down a high-rise. I hope the students walk away with the notion that the failure has not been adequately explained by NIST. Moving forward, you can't make appropriate design decisions if not, right?”

Following on the heels of engineer Szamboti’s presentation showing what couldn’t have brought down WTC 7, his colleague, AE911Truth founder and architect Richard Gage, spoke about the evidence that showed what did bring it down — namely, incendiaries and explosives. The evidence for the use of thermate, Gage said, includes abundant molten iron in the rubble pile, which was witnessed by both structural engineers and first responders, as well as the dust samples analyzed by the U.S. Geological Survey and RJ Lee Group, Inc. Then there were the red-gray chips of nano-thermite ubiquitous in all four independently collected samples that were analyzed by a small team of scientists. (The film 9/11: Explosive Evidence — Experts Speak Out makes these points.)

As he gave the students a tour through the 10 features of controlled demolition, Gage showed them how Building 7 showed every characteristic of explosives. He also pointed to the great number of first-hand witnesses of the WTC 7 explosions.

The 70-strong audience, comprised largely of students, was polled after the presentations. All but four of the attendees indicated that they wanted a new investigation of WTC 7. Interestingly, the four holdouts were faculty members, who continued to maintain that the NIST report adequately explained the collapse. (We would have liked to have been a fly on the wall during the ensuing discussions between students and faculty.)

After the three presentations, many detailed questions were asked of the panelists. For instance, one NJIT structural engineering professor suggested that the fireproofing could have been dislodged by the [alleged] movement of the girder across the bearing plate. In response, Gage and Szamboti noted that the 1995 Cardington, UK, fire tests showed that 2,000°F fires could not bring down a five-story steel-framed building, even though it didn’t have fireproofing in many parts of its structure. 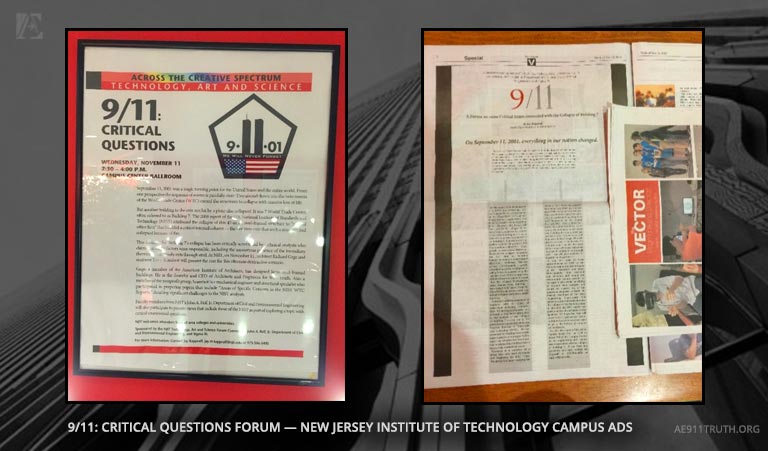 The "9/11: Critical Questions" forum was adequately advertised on campus. Despite that, the credits normally offered student-attendees of these forums were withheld from this event, in deference to a more popular competing forum on campus.

L to R: Forum speakers Richard Gage and Tony Szamboti conferred with Professor Taha Marhaba, NJIT's civil engineering department chairman, prior to the controversial 9/11 forum. They learned that Marhaba had faced much criticism for sponsoring the event, but that he had held firm in his belief that, as he put it, “NJIT is a place where such a technical discussion should occur.” We applaud this professor's fortitude in defending academic freedom of speech. 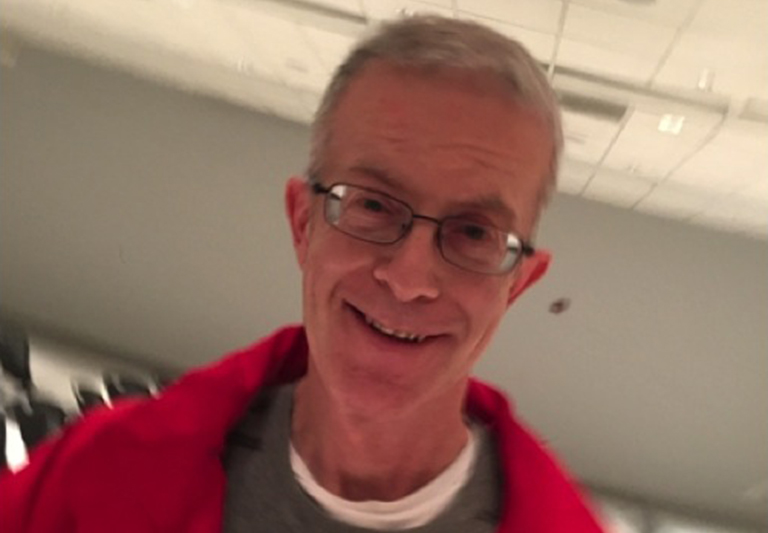 Forum attendee Henry Pavlak is a survivor of 9/11. He worked on the 44th floor of one of the Twin Towers, but he was having breakfast in the cafeteria on the 27th floor when he heard the first explosion. Haunting him to this day is the knowledge that when he evacuated, he was forced to leave behind a wheelchair-bound friend. Pavlak wrote a fiction-based memoir, "One-Way Elevator," in which he explores the facts of 9/11.