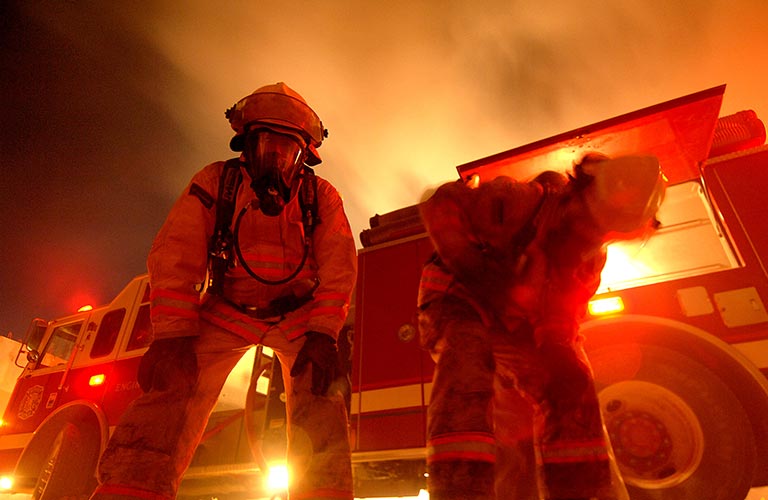 World Trade Center Explosions Described by the People Who Were There

It was a treasure trove of evidence, just waiting to be examined.

An intrigued Graeme MacQueen decided to do just that.

MacQueen, a retired university professor and 9/11 researcher, noticed that, even though a full five years had elapsed since the World Trade Center towers were leveled, no one had done a thorough investigation of the eyewitness accounts of explosions that took place on September 11, 2001. He realized that he was well suited to take on such a study, as he had the requisite time, research skills, and motivation.

The Canadian academic got the idea for this project from an article written in early 2006 by David Ray Griffin, titled "Explosive Testimony: Revelations about the Twin Towers in the 9/11 Oral Histories." In it, 31 witnesses to the explosions were identified. While fascinated by the selection of first-hand accounts Griffin presented, MacQueen reasoned that a more detailed analysis of all 503 oral chronicles could reveal even more. Those accounts — from firefighters, emergency medical technicians, and paramedics — had been recorded between early October 2001 and late January 2002.

"They suffered through the thing; many of them are sick now," MacQueen explains. "They can tell me what they saw, what they heard, what they felt — just remarkable. What an opportunity to just get a sense of what it was like that day." 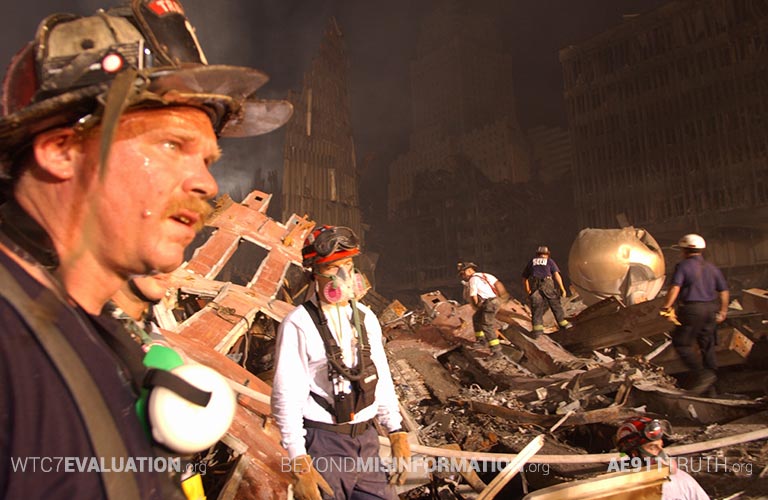 Paving the way for MacQueen's study was a successful lawsuit filed by The New York Times, which had forced the City of New York to release the nearly 12,000 pages of oral histories given by members of the Fire Department of New York.

"It's all well and good to say these buildings were demolished, but surely someone would notice, right?" MacQueen asked rhetorically in a recent interview. "Well, they did."

Indeed, as he read one story after another, he saw many vivid descriptions of explosions. Meticulously studying each, MacQueen arrived at a "cautious" total of 118 eyewitnesses who had specifically reported explosions. (Some people criticized him for including accounts that they felt were inconclusive.)

"They're more reliable, in my opinion, than most newspaper accounts," MacQueen asserts, "because these people were taped, and the audio tapes were transcribed. You get the name of the person, you get where they were, who interviewed them, and when they were interviewed. This is really useful." 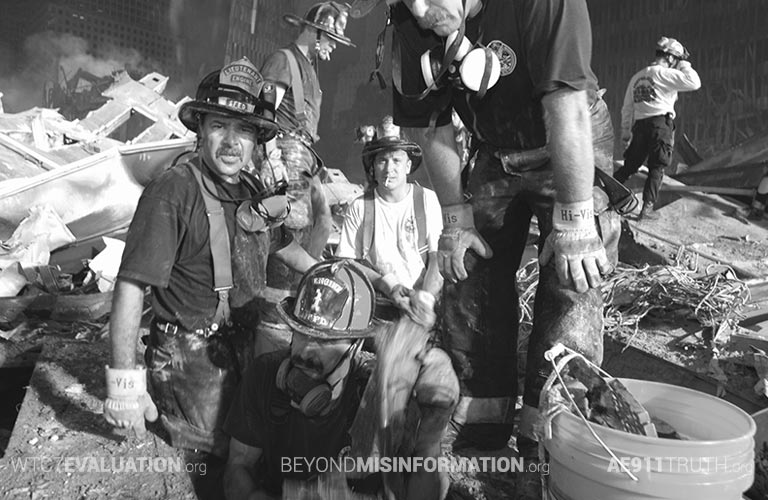 MacQueen figures he was probably one of the first — and possibly the only — person to read all of the accounts, which go by the official name, The World Trade Center Task Force Interviews. They were recorded by the Port Authority of New York at the instruction of city fire commissioner Thomas Von Essen.

The result of MacQueen’s investigation was "118 Witnesses: The Firefighters' Testimony to Explosions in the Twin Towers," which was published in the Journal of 9/11 Studies (of which he is currently co-editor) in August 2006. More on the findings can be found in the AE911Truth booklet Beyond Misinformation: What Science Says About the Destruction of World Trade Center Buildings 1, 2, and 7, which was released in September. 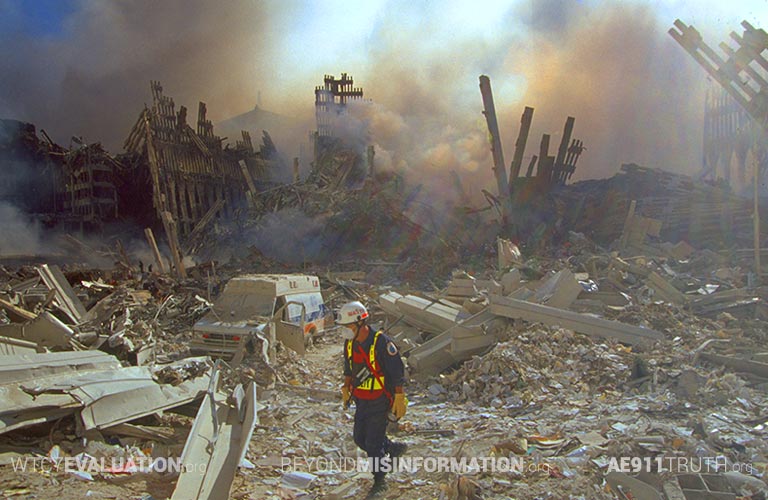 MacQueen says he thought it would be helpful for the movement if he could contribute "solid and quantifiable" eyewitness testimony as a complement to the forensic evidence that scientists have gathered to test the controlled demolition hypothesis. That said, he admits that many are prejudiced against eyewitness accounts, believing them to be unreliable. But, MacQueen contends, it's possible to learn a great deal from what eyewitnesses describe when their accounts are analyzed and combined with other types of evidence.

"Eyewitness evidence is really important," he says. "Ordinary people can identify; they can relate to that. If you start evoking their high school physics, they just tune out. But if you can say, look, this was a cop who was on the scene, and he says there was an explosion that was so strong it picked him up and threw him across the concourse — well, they can relate to that."

It was essential, MacQueen asserts, to look not only at how many people perceived explosions but also at how many of the histories seemed to contradict them. 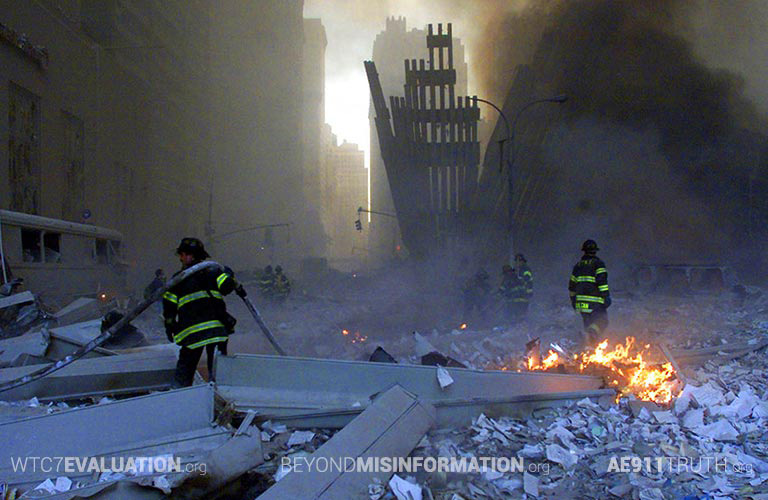 Before he could start, MacQueen had to first decide how to analyze the documents — what to look for, what would support the existence of explosions and what would count against it. He determined that his first read-through would be for the purpose of noticing and listing all the terms that were relevant to the subject. During a second reading, he would catalogue every account that featured key words, such as "explosion," "bomb," "implosion," and "blast." As he proceeded, MacQueen made a point of erring on the side of caution — meaning, he says, that someone who mentioned a loud rumbling or other similarly vague description was not included in the tally.

After his figure of 118 witnesses to explosions became established within the 9/11 Truth Movement — even though people were often not aware of where it had originated — MacQueen sensed that that he still hadn't exhausted the list of potential witnesses.

So he began scouting for witnesses beyond the FDNY employees who had reported explosions. For instance, he examined police accounts assembled by the Port Authority Police Department. He also pored over many media archives that featured interviews with eyewitnesses and first-hand reports by journalists. Watching as many videos as he could was "hugely important" for his research, MacQueen notes. As a result of this second study, the figure of 118 rose to 156. And, just as he had done earlier, MacQueen made a point of erring on the conservative side.

Based on his follow-up analysis, MacQueen authored another study, "Eyewitness Evidence of Explosions in the Twin Towers," which he presented at the Toronto 9/11 Hearings in September 2011.

He envisions the possibility that there are many more people who could have witnessed explosions, which is why he encourages other researchers in the movement to pick up where he left off.

MacQueen concedes that a number of those interviewed for the oral histories later changed their views about explosions. But that happened after the official 9/11 narrative was firmly established in the public consciousness. And, as we know, the official narrative never mentions the possible use of explosives to bring down the three buildings. Thus, some firefighters who originally reported experiencing explosions later changed their minds and concluded they must have been mistaken, simply because the official story blames office fires for the skyscrapers' destruction.

"Our memory of these things will change, and it will tend to be in the direction of the social consensus," MacQueen points out.

But despite the fact that some reconsidered their original account, most of those who reported explosions have stuck to their stories. Their powerful and revealing oral histories are a tremendously valuable resource for anyone who wants to know what happened at Ground Zero that day.

"It's extremely important," MacQueen says. "The whole global war on terror is at stake here."