In its 2005 report on the collapse of Twin Towers on September 11, 2001, the National Institute of Standards and Technology provided a hypothesis of the events leading up to the fall of the 110-story skyscrapers, which NIST called the "collapse initiation sequence." Regrettably, the report stopped short of examining how the two buildings actually came down.

Now, more than a decade later, 9/11 researcher Jonathan Cole, P.E., has taken up where NIST left off. His newest multi-part experiment replicates the same physical principles that apply to World Trade Center Buildings 1 and 2. In it, he analyzes the observed motions of these towers as they fell symmetrically.

Cole demonstrated his experiment at the inaugural 9/11 Truth Action Project Conference, held in St. Petersburg, Florida, on February 6. The videotaped version will later be released under the title 9/11: The Force Behind the Motion on Cole's YouTube channel physicsandreason and on fellow scientist David Chandler's website 911speakout.org.

A civil engineer, Cole started studying the fall of the Twin Towers and WTC Building 7 in 2008. Since then, he has conducted several experiments with the goal of either proving or disproving certain elements of the official story of the World Trade Center's destruction. Some of his tests have explored the concepts of mechanical force and resistance. Others have demonstrated whether thermite can cut a steel beam and whether the sulfur contaminants found on some of the WTC steel could have possibly come from drywall — a theory posed by defenders of the official narrative.

So what inspired Cole to devise his latest demo? He explains:

Although it's relatively easy to demonstrate what didn't happen to the towers — that is, a pancake-type collapse or the so-called pile-driver collapse — it's far more difficult to demonstrate what more likely did happen using explosives or some outside force besides just heat and gravity. I wanted to come up with a way to demonstrate this, so I started to work on some concepts about a year and a half ago, and finally was able to mimic some of the fundamental motions observed with the towers' fall.

Cole's experiment is in three parts. That is, it studies the motion that would have been observed in the Twin Towers' collapse in each of the three main hypotheses that have been put forth to explain their destruction — the pancake theory, the pile-driver theory, and the controlled demolition theory.

1. The pancake theory was first advanced by the US Federal Emergency Management Agency (FEMA), with the assistance of the American Society of Civil Engineers (ASCE), in September 2002. That theory was later abandoned when the investigation was handed over to NIST.

Cole's model to test the pancake theory uses a series of evenly-spaced planks and a tall wood structure with cleats that hold the "floors" in place. He drops a 20-lb. block of steel from about 10 feet above the structure, observing the motion of the block as it hits each floor. The idea is to see if it continues to accelerate due to the ever-increasing accreting mass, or if it decelerates due to the resistance given by the floors.

This experiment proves that pancake collapses, had they occurred, would have caused the fall of the Twin Towers to rapidly decelerate as the top portions hit the undamaged floors below. Yet videos taken of the actual fall of Buildings 1 and 2 show no such deceleration.

2. The pile-driver theory, which NIST adopted in its official report published in September 2005, draws from the mathematical papers of Professor Zdeněk Bažant of Northwestern University. This theory alleges that the tops of the towers acted as pile drivers, crushing the stronger, larger structures below the floors where the airplanes hit each tower, respectively. Once the lower sections were crushed down, this theory asserts, the tops of the buildings crushed themselves.

To test the motion involved in the pile-driver theory, Cole constructed a representative floor system, with the top floors dropping on floors below to simulate the upper block of a tower hitting the lower block. He secured steel-pipe guide rails in a concrete base and drilled holes in the top block (above the airplane strikes), which allowed those upper floors to slide unimpeded down the guide rails in order to keep the system straight (otherwise, they would have fallen over upon impact). 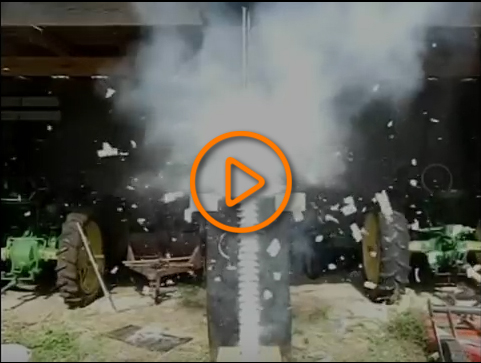 The motions observed in both of the above tests, however, bear no resemblance to the motions observed in the crumbling Twin Towers. As Cole's experiment confirms — and as a 2009 Tony Szamboti-Graeme MacQueen paper, "The Missing Jolt: A Simple Refutation of the NIST-Bazant Collapse Hypothesis," explains — there would have been a significant deceleration of the top blocks above the airplane-damaged areas as they hit the lower sections beneath. The calculations that Szamboti and MacQueen made based on watching a video recording of the North Tower coming down showed no measurable deceleration of the top block as it collided with the bottom one.

According to Cole, the notion that a smaller, lighter, top portion of a structure can crush a larger, heavier, lower portion all the way to the ground in the manner witnessed on 9/11 — as officials tell us happened — defies reason. He elaborates:

The public tends to jump to conclusions. To them, it seems "logical" that tall structures would simply collapse straight down once that downward collapse was started at the top. But the reality is quite different. That's why engineers, like nature, generally design tall structures so that they are structurally tapered and stronger the lower it goes. Think of a big tree, a giraffe's neck, or a stadium light pole. They are all tapered and all get stronger at the base. The same was true of the Twin Towers. The lighter top can't drive itself down into the stronger, undamaged base. If it could, lumberjacks could top a tree and expect it to drive straight down through the trunk, making a huge pile of sawdust. Obviously that won't happen, even if weakened by cutting or hit by lighting at the top. Rather, the downward motion would come to an abrupt stop, and the top would tip over.

3. To test the theory of controlled demolition, which is supported by Architects & Engineers for 9/11 Truth, Cole built a model with supporting walls made out of paper and matchsticks. In his presentation earlier this month, he used firecrackers to set off explosions on each wall of both "towers." Compared to his pancake and pile-driver experiments, the motions observed from the explosives looked by far the most similar to what observers saw (live and on video) when the actual buildings were destroyed on 9/11.

It's important to study the motion of the towers, Cole believes. Regardless of scale, the direction of the net force is always in the same direction as the observed acceleration. As he puts it:

If you observe any object accelerating along a certain path, then the direction of the net force acting on that object is also in the same path. So, for example, if you shoot a semi-automatic handgun, the shell casing is ejected to the side and the bullet to the front. And after they leave the gun, both the bullet and the shell travel in a type of parabolic arc, neglecting air resistance.

That means that the direction of net force on the bullet and the shell are also a type of parabola. Although they are different parabolas, fundamentally the direction of the net forces — the vector sum of horizontal and vertical gravitational forces — is basically the same.

AE911Truth will let supporters know when Cole posts the video of the experiment on his YouTube page. Other YouTube users are invited to mirror it, and viewers are encouraged to share it with friends on social media and forward it to scientific professionals with a request for feedback. After all, it's only by studying alternative collapse theories and comparing their dynamics to what was actually witnessed that we can come to a better understanding of what really leveled the Twin Towers on that terrible and tragic day.