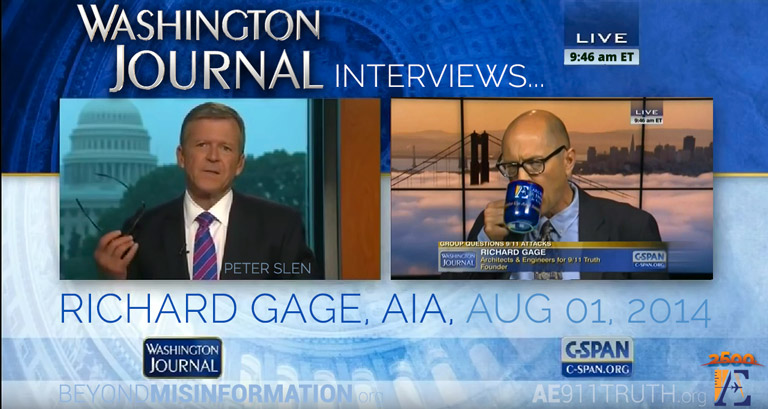 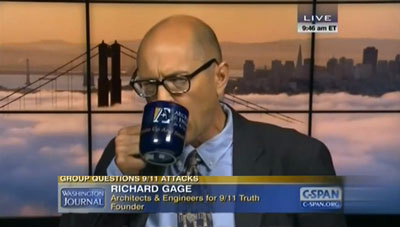 Richard Gage, on C-SPAN's Washington Journal, "mugging" for the camera while educating millions of viewers on the "collapse" of WTC 7. The producers showed the video we provided of Dan Rather on CBS saying, "Amazing, incredible, pick your word. For the third time today, it’s reminiscent of those pictures we’ve all seen too much on television before, where a building was deliberately destroyed by well-placed dynamite to knock it down." It's the kind of rare opportunity that members of the 9/11 Truth Movement wish would come more often.

Architects & Engineers for 9/11 Truth founder Richard Gage, AIA, was invited to bring the evidence for the explosive demolition of the three World Trade Center towers to viewers of C-SPAN today on its morning program Washington Journal. His 45-minute appearance — which can be viewed here by those who did not see it live — is enabling the 9/11 Truth message to reach a national television audience of millions.

Gage explained to viewers that his organization, representing more than 2,200 architects and engineers, is focused on the science of the event and on calling for a new, independent investigation. He encouraged viewers to visit the AE911Truth.org website and watch the landmark video 9/11: Explosive Evidence – Experts Speak Out.

Richard Gage and the CBS Dan Rather video, being shown to millions on C-SPAN, following a year-long campaign by supporters needing to find truth and justice behind the story of 9/11. Almost every episode of Washington Journal had concerned Americans asking for AE911Truth to be a guest to bring the story of WTC Building 7 to light, no matter the topic or guest. Persistence pays off!"Every one of our [C-SPAN] viewers today should be calling their Congressmen and Senators and finding out why they're not investigating the worst act of mass murder in U.S. history and the third-worst structural failure in modern history," Gage said. "This is an extraordinary and unacceptable situation."

Host Peter Slen told viewers that Gage was brought in as a guest because Washington Journal had received so many calls in recent months asking its other guests to address the issue of how Building 7 fell on 9/11 when it was not hit by a plane. The invitation shows that the continuing efforts of 9/11 Truth activists to bring the issue to the attention of the public are not in vain. 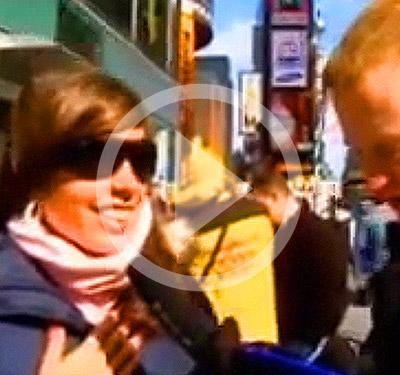 "When Did 9/11 Happen?" It really shouldn't be a tough question... Watch it here! Slen read excerpts from the Frequently Asked Questions section of the National Institute of Standards and Technology website, which gave Gage the opportunity to explain how NIST fails to address the forensic evidence that AE911Truth's building and technical experts have accumulated, including the symmetrical destruction of Building 7 at free-fall acceleration, the explosions reported by first responders, the evidence of thermite in the dust, and the molten iron found in the rubble of all three towers. Gage also pointed out that at least two media outlets — CNN and the BBC — reported the destruction of Building 7 before it actually occurred.

Several excellent questions were asked by Washington Journal callers, most of whom made intelligent points about the subject and had supportive comments about AE911Truth.

Both the appearance by Gage on C-SPAN and recent attention given by the media to the High-Rise Safety Initiative offer real hope that the ongoing efforts of the 9/11 Truth Movement are starting to show some significant results.

Indeed, after the interview, Gage told the AE911Truth team that he is "quite encouraged to finally be treated in a fair and balanced manner in a mainstream media TV interview. I also appreciate Washington Journal's commitment to providing a forum for all voices concerning the important issues that affect our country. When it comes to the controlled demolition evidence," he mused, "the question is, 'How soon before other networks learn from C-SPAN's example?'"