Credit is provided to Institute members who take the course because AE911Truth is an AIA CES-approved provider of continuing education. Its seven registered courses can be found at AE911Truth.org/Get-Involved/Continuing-Education.

AE911Truth founder and CEO Richard Gage, AIA, presented the information-packed course on WTC 7’s troubling collapse after chapter members wrapped up the business portion of their monthly meeting, held on Thursday, January 19, at the famous Oyster House in nearby Spanish Fort.

While barely-visible alligators lurked below the water’s surface just outside the restaurant, any “biting” skeptics inside were less apparent. Perhaps that's because Gage presented only the facts about this 47-story high-rise, which fell symmetrically at free-fall acceleration in the exact manner of a classic controlled demolition on the afternoon on 9/11. 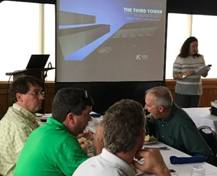 The photo on the screen reminded architects during their business meeting of the WTC course up next on their agenda.

Gage began with an overview of Building 7 and then proceeded to list the observable elements of its collapse. The architects in the audience learned about the strategies employed in high-rise steel-frame design — strategies that have rendered skyscrapers immune from destruction by fire.

They also learned the series of alleged failures in the collapse initiation theory advanced by the National Institute of Standards and Technology — and why more than 2,750 architects and engineers agree that NIST's assumptions and conclusions are invalid.

Then they learned the 10 standard features of controlled demolition, all of which are exhibited in the destruction of WTC 7.

When Gage asked for a show of hands after his presentation, the architects who indicated that a new investigation was needed far outnumbered those who didn’t. 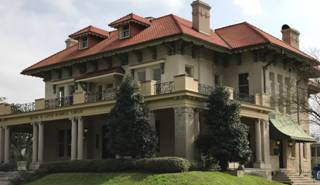 AE911Truth's New Orleans event took place at a former mansion, now the Latter library, on St. Charles Avenue (called "the Avenue" by natives). It was designed by architects Favrot and Livaudais and constructed in 1907.

In the latter camp was one skeptical structural engineer who focused his comments not on structural principals but on "appeals to authority," such as the number of engineers involved in the original reports, which he seemed to take refuge in.

Gage said later that he would rather have heard the engineer ask, or better yet answer, the more relevant question: How could this building fall at free-fall acceleration without even slowing down to do the work needed to cause the plastic and elastic deformation of any of the 80 steel columns in this building?

By appealing to authority (official authority, in this case) and also questioning the credibility of the architects and engineers who have signed AE911Truth's petition, this engineer was sidestepping the evidence instead of accepting the tough challenge of dealing with it and its implications, Gage observed.

Inside the library, Gage fielded questions after his presentation.

On behalf of AE911Truth, Gage extended his thanks to Mobile AIA past-president Louis Tooker and current president Lauren Arington, the event's coordinators, for their willingness to take on this challenging topic.

Gage acknowledges the dilemma that the controlled demolition evidence presents to the architecture profession. As he puts it, each architect must wrestle with this question: “What do I do with this new information? If I ignore it, I'm in an ethical bind. Yet if I speak up, I may face ridicule.” 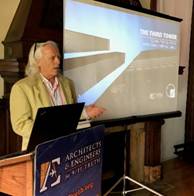 Local 9/11 researcher and author Don Paul, who wrote Waking up from our Nightmare: The 9/11 Crimes in New York City, spoke after Gage, answering questions beyond the technical scope of AE911Truth.

According to Gage, it is up to each architect to deal with the dilemma in his or her own way, as conscience dictates. Many architects have taken the leap, joining hundreds of fellow AIA members in calling for a new investigation of Building 7 by cosponsoring the AIA Resolution put forward by AE911Truth.

After the Mobile event, Gage made two presentations in New Orleans. The first was on Friday, January 20, at architecture firm Ehlinger & Associates. Each of the architects who took The Third Tower course signed up as cosponsors of the aforementioned AIA Resolution.

Then, on Saturday, January 21, Gage hosted a public World Trade Center awareness event at the historic Milton H. Latter Memorial Library, which was once the home of prominent Canal Street merchant Mark Isaacs.

Of the 14 who were present, one was an architect and one an engineer. All favored reinvestigation of the three WTC high-rise collapses. 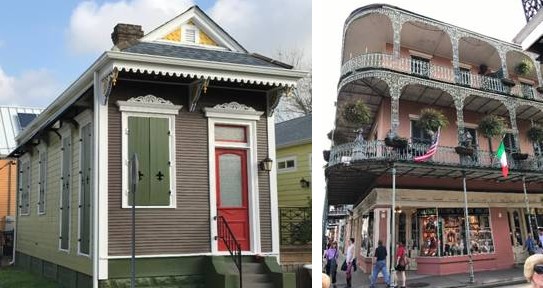 A consummate appreciator of great historic architecture during his travels, Gage took in the exceptionally exquisite Creole homes of New Orleans (left) and the lacy iron balconies of the French Quarter (right).

AE911Truth is putting out the word to architectural firms and AIA chapters that members can invite Gage to their city and have him present The Third Tower course in person. In addition, architects can take these four on-demand courses: 9/11: An Architect's Guide; 9/11: Explosive Evidence—Experts Speak Out; 9/11: Blueprint for Truth; and Beyond Misinformation: What Science Says About the Destruction of World Trade Center Buildings 1, 2, and 7. More information is available at the Continuing Education web page.