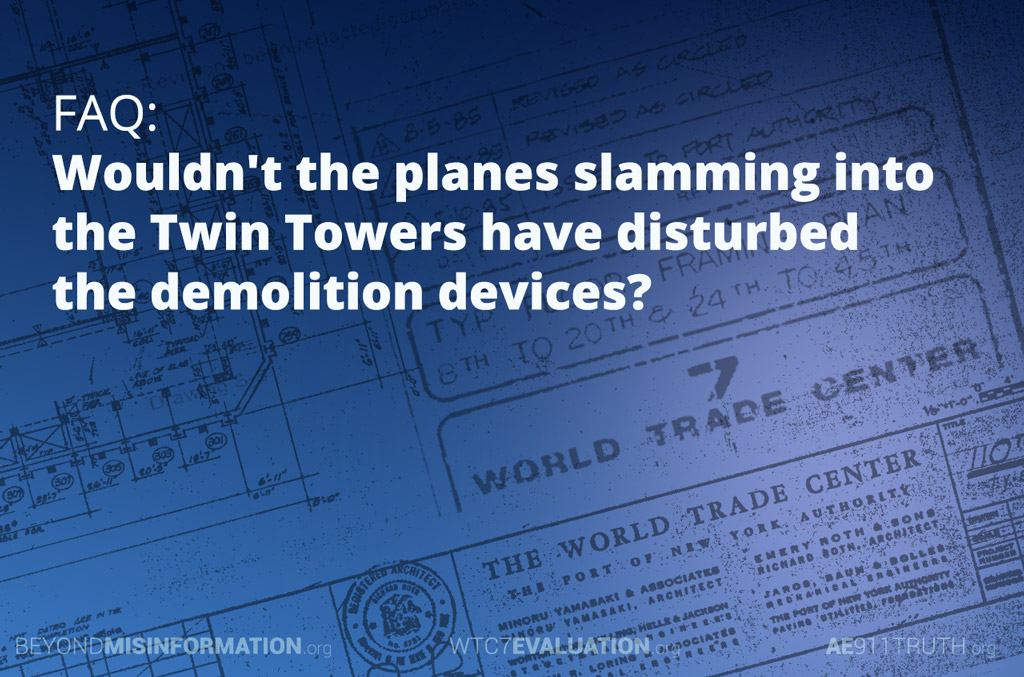 First, we will frame the issue by noting that the answer to this question does not negate the evidence that the World Trade Center towers were destroyed through controlled demolition. The massive amount of evidence gathered by AE911Truth and countless others demonstrates that the combined effects of the impacts and the ensuing fires do not account for the complete and explosive destruction of the WTC skyscrapers.

Actually, the explosive destruction of the Twin Towers began at floors that incurred minimal damage from the planes. In the North Tower, the collapse began at the 98th floor, which in fact had minimal structural damage. Only the tip of the first plane's right wing cut through that floor.

Left: North Tower (WTC 1) north face; Right: Damage relative to the shape and size of a Boeing 767. Note that only the tip of the starboard (right) wing cut through the 98th floor.

According to the NIST report (NCSTAR 1, pg. 87), the collapse of the North Tower began at this floor. Though the NIST report never specifically states that the 98th floor was the least damaged of all the North Tower floors into which the plane slammed, information the report does provide clearly demonstrates this is the case. The 98th floor had only five perimeter columns severed. The table provided in NCSTAR 1-2 indicates that NIST did not list Floor 98 as having any of its core columns severed (see page 205).

If the demolition was meant to start at the North Tower's 98th floor, where there was the least amount of damage from the plane, then the plane's impact would not have had any serious effect on well-designed demolition devices placed on this floor.

Second, a demolition using advanced nano-thermite material (which has been identified in the World Trade Center dust) may help to explain why the fires started by the planes did not set off explosive devices. As explained by Dr. Steven Jones: 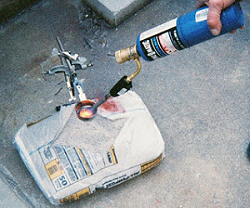 In this experiment, “normal” thermite did not ignite when heated with a propane torch. Similarly, the “super-thermite” found in the World Trade Center dust could not have been ignited by the jet fuel and office fires in the Twin Towers.Dr. Jones’s point about triggering the thermite with electrical super-thermite matches is noteworthy because, as observed by the Los Alamos National Laboratory, these types of matches can be made to “resist friction, impact, heat, and static discharge through the composition, thereby minimizing accidental ignition.” The same article notes that one application of these matches can be to trigger explosives for demolition.

Third, some of the devices were indeed affected by the plane impacts, as is evident from the spout of molten metal seen flowing out of the 81st floor of the South Tower. This would also be consistent with a thermite-based demolition, as noted by Jim Hoffman:

“Partly because thermate produces bright orange light while burning, Stage 1 is allowed time to run to completion before Stage 2 commences. In the South Tower, some thermate pushed by the plane crash from the building's core to its corner generates an orange spout lasting from about T-7 to T-2 minutes.”

The molten metal seen flowing from the South Tower, which may have been a result of the airplane impacting the demolition materials, is actually further evidence of controlled demolition.Critics contend that this material is molten aluminum from Flight 175. However, these claims have been shown to be false. Even if the demolition devices were affected in some way by the planes, this does not automatically mean that the overall demolition of the Towers was affected. If anything, the molten metal flowing from the South Tower is very likely evidence of thermitic-based devices placed in the building—devices that may have been disturbed and ignited by the plane impact itself.

Further exploration of this topic can be found at 911Research.com.