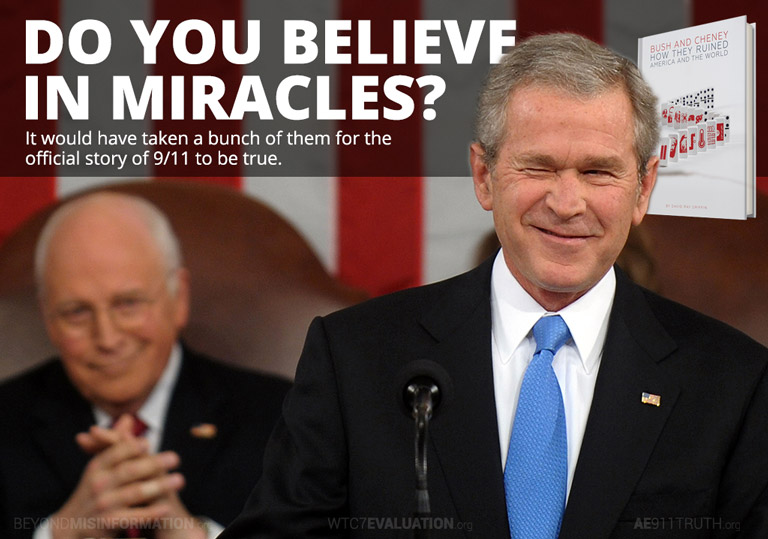 Griffin Takes On Bush, Cheney, and the ‘Miraculous’ Destruction of the WTC Towers

It would have taken a miracle. A bunch of them, actually.

For the official story of 9/11 to be true, numerous physically impossible things would need to have taken place that day. This is the case made by prolific 9/11 researcher David Ray Griffin in his latest book, Bush and Cheney: How They Ruined America and the World. It is the 12th Griffin-penned volume that takes on the official government claims of what happened—and did not happen—on 9/11. It also marks his return to the subject for the first time since 2011’s 9/11 Ten Years Later: How State Crimes Against Democracy Succeed. 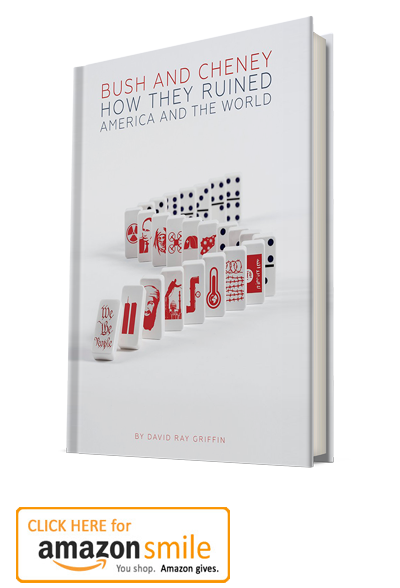 While the first part of Bush and Cheney focuses on the broader issues suggested by the title (including the Iraq and Afghanistan wars, the proliferation of Islamophobia, the shredding of the U.S. Constitution, and the advent of drone warfare) the second part is devoted to Griffin’s detailed research into evidence that contradicts the official story of 9/11.

Griffin ties what happened on 9/11 to actions, or non-actions, by the “Bush-Cheney administration,” although he gives the former vice-president greater weight than he does the former president. Nevertheless, Griffin is clearly stating that the decisions made by this administration on 9/11—and in the years that followed—have had devastating consequences for the world.

In the course of these two chapters, Griffin dismantles the official claims piece by piece until nothing of substance remains. Much of the ground he covers will be familiar to longtime 9/11 truth activists, although his overview of the science will still be helpful to any reader seeking ways to educate the uninitiated.

After going through the impossibilities of the official scenario, Griffin finishes each chapter with a list of “miracles” that would need to have taken place for the events to have unfolded as claimed by the official story. It is the methodical and detailed nature of Griffin’s 9/11 research and presentation that makes the book—in fact, all of his 9/11 books—so credible and so persuasive.

Griffin sets the stage with this statement: “Given the fact that a steel-framed high-rise building has never come down without the use of explosives, those who claim this happened on 9/11 should provide some evidence that such an event would even be possible. There could be no historical evidence, of course, because such a collapse would be unprecedented” (p. 249).

In addition to demonstrating how federal authorities tasked with investigating the WTC destruction—the Federal Emergency Management Agency (FEMA), the National Institute of Standards and Technology (NIST), and the 9/11 Commission—were not the “neutral” or “independent” voices they purported to be, Griffin examines the “miracle of free fall,” focusing on how the following statement from the 2005 NIST report contradicts the laws of physics:

“Since the stories below the level of collapse initiation provided little resistance to the tremendous energy released by the falling building mass, the building section above came down essentially in free fall, as seen in videos” (p. 252).

Griffin dismisses this claim by quoting structural engineer William Rice, who said that NIST’s account violates Newton’s law of the conservation of momentum, which dictates that the descent of the top sections would have slowed as resistance from each new floor was encountered.

Then Griffin points to the additionally “miraculous” behavior of the South Tower’s top section, which started to tip over as it began its descent. What didn’t happen, but should have happened, is explained in this quote from the book:

“As videos of the beginning of this building’s collapse show, this block began tipping toward the corner that had been most damaged by the airplane’s impact. According to the law of the conservation of angular momentum, this section should have fallen to the ground far outside the building’s footprint” (p. 253).

Not only did the top section not land outside the building’s footprint, it never landed at all. Rather, videos show it was blown apart in midair, surely a miracle if explosives were not involved. 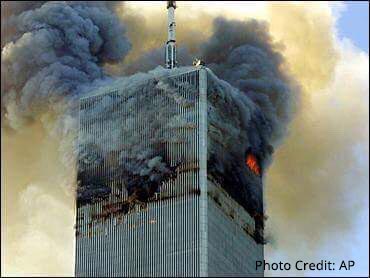 Griffin finds a significant and shocking quote from 9/11 Commission co-chair Lee Hamilton, who told the CBC’s Evan Solomon in 2006 that “the super-heated jet fuel melted the steel super-structure of these buildings and caused their collapse.”

How many times have we heard defenders of the official story tell us that it wasn’t necessary for the steel to melt, it just had to weaken? (Of course, this line of argument ignores the fact that dozens of eyewitnesses observed molten metal in the debris.) But, according to Hamilton a fire ignited by jet fuel and fed by burning office furnishings was sufficiently hot to melt steel and bring the towers down in 56 minutes (South Tower) and one hour and 42 minutes (North Tower), respectively.

Griffin then chronicles the issue of explosions witnessed by first responders, journalists, and others prior to either of the Twin Towers coming down. While numerous reports on September 11 pointed explicitly to explosions having taken place in both towers, these reports soon disappeared from media coverage. Griffin writes:

Griffin looks at another statement from Lee Hamilton about the possibility that explosives were used to destroy the towers: “We of course looked at that very carefully—we found no evidence of that.” This is contradicted by NIST’s Shyam Sunder, who said that no effort was ever made to test for the presence of explosive residues in the WTC dust.

The chapter also addresses the horizontal ejections from the towers, the time it took for the towers to come down, and the presence of molten metal under the towers for months after the event. Griffin sums up his case by listing six “miracles” that would need to have occurred. Griffin writes:

The chapter concludes with this powerful statement:

“Given how disastrous the official account has been for America and the world in general, perhaps some newspapers or TV networks will have the courage to point out that the Bush-Cheney account of 9/11, like the Bush-Cheney argument for attacking Iraq, was a lie.”

As Griffin argues in the second of the two chapters, Building 7 offers a particular set of problems for the 9/11 official story. The central issue is that there is no scientifically defensible explanation for how the building came down. This, he notes, might help explain how it took NIST until 2008 to come out with its final report on the subject. 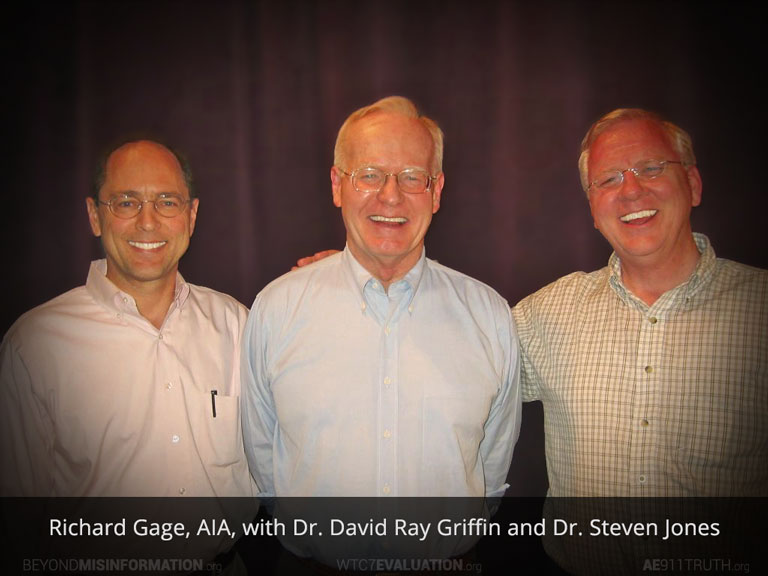 As with the numerous eyewitness reports of explosions in the Twin Towers, the destruction of Building 7 quickly disappeared from media coverage. It is clear, Griffin asserts, that Bush and Cheney did not want this subject to get any public attention for one simple reason: While the Twin Towers’ destruction could be pinned on the two plane impacts, there was nothing that could be used to even attempt to explain how this 47-story skyscraper was completely destroyed in under seven seconds.

In fact, the chapter begins by reminding us of the extraordinary fact that Building 7 is not even mentioned in the body of the 571-page 9/11 Commission Report. This fact was also probed by the CBC’s Solomon in the Hamilton interview mentioned above. At first Hamilton said that Building 7 was included, but, when challenged, he conceded that it may not have been, although he claimed it had at least been “reviewed” by the commission.

Griffin reiterates in this chapter that no high-rise building has ever come down without the aid of explosives or incendiaries. This he calls the “basic miracle,” and he goes on to chronicle several official attempts to make the miracle “not seem totally outrageous.” These include NIST’s final report on Building 7 and the Popular Mechanics book Debunking 9/11 Myths: Why Conspiracy Theories Can’t Stand Up to the Facts. A link to the PM book (or just to the PM article that preceded the book) is very often relied upon by those who push the official story; they slap the link down on social media whether they’ve actually read the book or not. Griffin refuted the PM arguments in his book Debunking 9/11 Debunking.

In fact, Griffin shows that NIST’s final report actually contradicts the two main pillars of PM’s attempt to explain Building 7’s destruction. One was the supposed damage done to the building by falling debris from the South Tower, and the other was the allegation that fires were fed by fuel tanks in the basement and on some of the floors. (See page 265.) As he points out, NIST itself stated that the falling debris had little effect on what happened to WTC 7, besides igniting the fires, and fuel oil fires had no effect at all. Griffin writes:

“The official account implies, therefore, that a very asymmetrical pattern of fires produced an entirely symmetrical collapse. If that would not be a genuine miracle, what would be?” (p. 266)

Things get even more interesting when the subject of melted iron is raised. Griffin tells the intriguing story of Deutsche Bank having its insurance claim turned down on the grounds that the damage to their building did not result from the destruction of Building 7. In response, Deutsche Bank hired the RJ Lee Group, which determined that an enormous quantity of iron microspheres had been found in the dust collected inside the bank building.

“Whereas iron particles constitute only 0.04 percent of normal building dust, they constituted (a whopping) 5.87 percent of the WTC dust. The existence of these particles, the RJ Lee Group said, proved that iron had “melted during the WTC Event” (p. 270).

Meanwhile, NIST reported that only three perimeter columns ever reached temperatures of 250˚C [482˚F]. Also, Griffin cites data from a study by the US Geological Survey, which found that molybdenum, the melting point of which is 4,753°F (2,623°C), had also melted.

Griffin goes on to explain that exceptionally high temperatures in Building 7 were further confirmed by three professors from Worcester Polytechnic Institute, who reported that a structural member from Building 7 showed evidence of “evaporated” steel. Griffin notes how such evidence is totally incompatible with the official story:

“So if one accepts the official account, according to which all the heat was produced by fires fueled only by building materials, then one must believe that these fires had miraculous powers” (p. 272).

In just these two chapters, Griffin makes a compelling case that is scientific but also accessible to most readers who want to better understand what happened. While I question his use of terms like “the 9/11 attacks” on the grounds that it can have the effect of reinforcing the language of the official story (I would argue that most people assume an “attack” is coming from an external enemy), that drawback is minor compared to the overall strength of Griffin’s presentation.

His work is simply the best all-around resource for those wanting to understand why the evidence does not support the official story of 9/11. His books are rational and meticulous, and the information in them solid, well-sourced, and insightful. Most importantly, he makes the best evidence accessible to a wider audience than it would otherwise reach. And that’s something the 9/11 Truth Movement badly needs.

Craig McKee is a journalist and the creator of the blog Truth and Shadows. David Ray Griffin’s Bush and Cheney: How They Ruined America and the World can be purchased on Amazon.com.