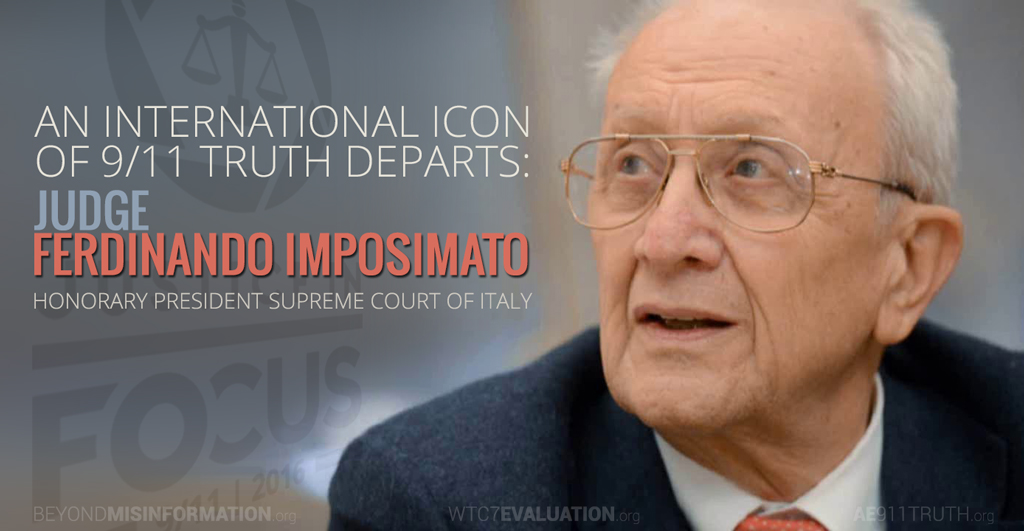 On January 2, 2018, the world lost a true hero in the fight for human rights, justice, government accountability, and, most recently but not least, the truth about the events of 9/11.

Judge Ferdinando Imposimato of Italy, honorary President of the Italian Supreme Court, died in Rome at Gemelli Policlinico, where he had been admitted to the intensive care unit on December 31, 2017. We at AE911Truth consider ourselves fortunate to have worked alongside Judge Imposimato for the cause of 9/11 Truth during his last several years, and we are extremely grateful for his dedication to our mission.

After the attacks of September 11, 2001, Judge Imposimato was quick to assist a representative of the Italian government who was in New York City counseling families of victims from that country.

Eleven years later, in September 2012, the judge wrote a letter published in the Journal of 9/11 Studies, in which he stated categorically, “[T]he 9/11 events were an instance of the strategy of tension enacted by political and economic powers in the USA to seek advantages for the oil and arms industries.” According to Imposimato, the events of 9/11 constituted an “American Gladio” and were designed to raise support for the US-led invasion of Iraq.

The judge remained committed to the pursuit of a legal resolution to the questions surrounding 9/11, which he felt could be accomplished through the International Criminal Court and/or the United Nations. 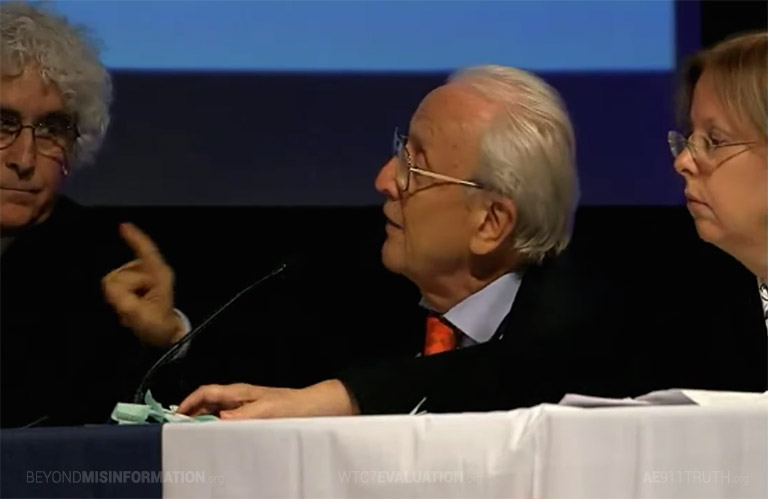 Judge Imposimato and other legal panelists evaluate the evidence given by more than a dozen technical and building professionals who testified to the explosive destruction of the World Trade Center skyscrapers on 9/11.

In October 2014, a newly formed Lawyers' Committee for 9/11 Inquiry in the U.S. invited Judge Imposimato to participate in its quest for 9/11 justice. After accepting that invitation, he conversed regularly with the organization's co-founder and president, attorney Jane Clark, helping develop legal strategies.

The following October, 9/11 researcher, author, and speaker Barbara Honegger was invited by Imposimato's long-time colleague and translator, Adam Buckley, to speak in Rome. Accompanying Honegger on the trip were Clark, renowned public interest attorney Daniel Sheehan, and Sheehan's colleague Sara Nelson. That trip facilitated two years of collaboration between the judge and Clark as they prepared for 9/11-related legal actions to be taken in the U.S. courts. 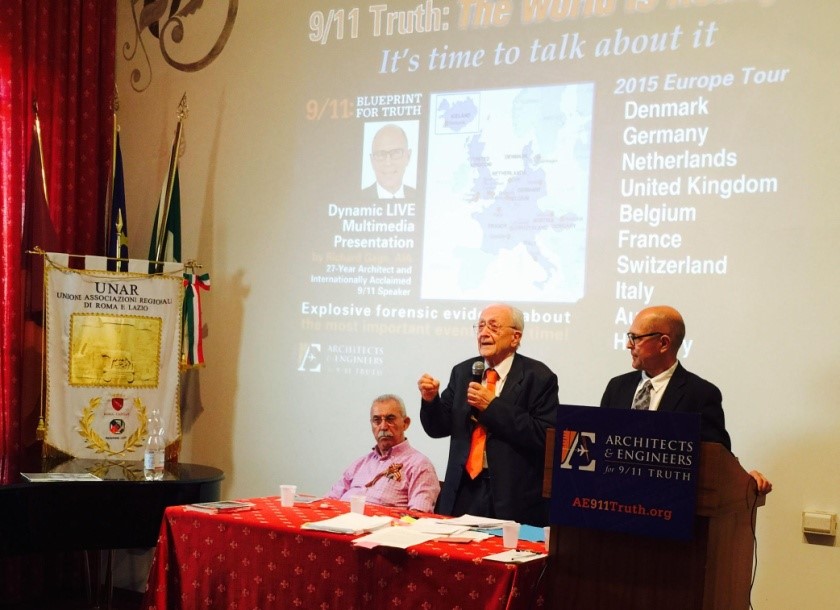 Judge Imposimato explains to his New York City audience the importance of getting to the bottom of 9/11, which he perceived as a Gladio-type event.

Judge Imposimato paved the way for AE911Truth founder Richard Gage, AIA, to make a presentation in Rome during Gage's 10-country, 20-city European tour in May 2015. This was Gage's first speaking event in Italy. He and the judge were joined by Giulietto Chiesa, producer of the 9/11 Truth documentary Zero, in the packed Associazione Amici della Puglia. During preparations for that event, local coordinator Adam Buckley commented, “Many Italo-Americans perished on 9/11. Italian people need to know the truth. Many people know there is much more than what meets the eye.”

When plans developed for AE911Truth's historic 9/11 Symposium, “Justice In Focus,” put on in New York City in September 2016, Honegger approached Buckley to suggest that Judge Imposimato be one of the speakers. When Buckley brought the idea to him, he accepted with his usual alacrity. At the two-day symposium, the judge spoke at length on the first morning, then throughout the weekend sat on legal and technical panels whose members discussed the destruction of the three World Trade Center skyscrapers. 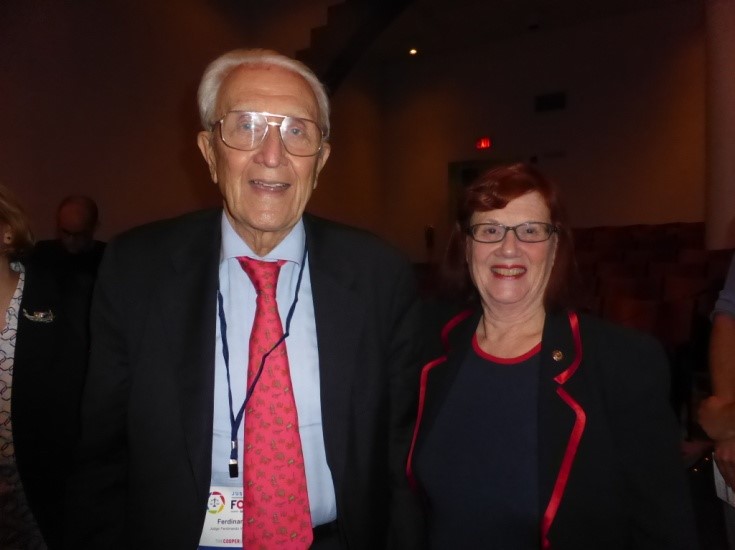 Barbara Honegger greeted Judge Imposimato when he arrived in New York for the historic “Justice In Focus” symposium in September 2016.

In a thank you note to Honegger following the symposium, Imposimato promised to continue to “give all my energy to the search for the Truth and Justice for all the victims of the massacres, wherever [they are] committed. For there is no peace without Truth and Justice.”

Ferdinando Imposimato was born on April 9, 1936, in Maddaloni, a town in the Italian province of Caserta. He received his law degree from the University of Naples Federico II in 1959. In 1962, served as the equivalent of a lieutenant with the Polizia di Stato, the primary Italian police force in charge of public security. In 1963, he joined the Italian Ministry of the Treasury, and one year later he began his career as an investigating judge. (In Italy, if police-gathered evidence regarding a criminal defendant is not crystal clear to the prosecutor's office, an investigating judge is assigned to look into the matter and make a ruling on his own. Only if that decision is appealed does the process enter an adversarial stage.)

Judge Imposimato spent over two decades investigating many important cases. His career coincided with Italy's "Years of Lead" — a period from the late 1960s to the early 1980s that was filled with social and political unrest, with many incidences of political terrorism. Among the most noteworthy of his cases were the kidnapping of former Prime Minister Aldo Moro (May 9, 1978); the massacre of Piazza Nicosia (May 3, 1979); the murder of Superior Court of Magistracy Vice-President Vittorio Bachelet (February 12, 1980); and the assassination attempt on Pope John Paul II (May 13, 1981). He also conducted numerous trials involving organized crime syndicates and their members.

During this time, his legal judgments were intensely resented by groups such as the Cosa Nostra (Sicilian Mafia); the Camorra of Naples; the Banda della Magliana of Rome; and the left-wing terrorist organization known as the Red Brigades. Judge Imposimato and his family were constantly threatened throughout this period. Tragically, on October 11, 1983, his brother Franco (a trade unionist) and Franco's wife were ambushed in their car by three members of the Camorra; Franco died in a hail of eleven rounds of bullets. Though wounded, his wife survived and identified the attackers.

In 1986, Imposimato took a hiatus from the judiciary to become a counselor to the United Nations, where he focused on the fight against illegal drugs. In this capacity, he traveled several times to South America, where he worked to strengthen legal systems in countries plagued by drug trafficking. He also worked extensively to promote human rights in those nations. Through the UN, he developed programs to train Colombian, Bolivian, Peruvian, and Ecuadoran judges in how to facilitate drug-related trials.

In 1987, he began legislative work back in Italy after being elected to the Senate of the Republic. In 1992, he was elected to the Chamber of Deputies (the second component of Italy's bicameral system). And in 1994 he was re-elected to the Senate. During all three terms, Judge Imposimato was a member of the parliamentary Anti-Mafia Commission and presented numerous bills on its behalf.

Eventually he returned to the judiciary branch and was nominated by the Supreme Court of Cassation as Honorary President. In 2013, Italy's Five Star Movement (M5S) placed Judge Imposimato on their list of ten possible candidates for President of the Republic (Italy's Head of State). Though he was not their final candidate for the 2013 election, in 2015 he was the candidate of choice. 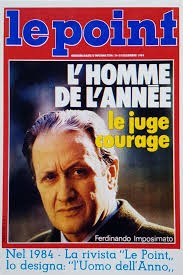 The judge has been acknowledged several times by the media for his public service and his personal tenacity. In 1984, after the vendetta murder of his brother, he was named "Man of the Year – a judge of courage" by the French magazine Le Point.

Imposimato was also awarded a prize (dedicated to anti-terrorism general Carlo Alberto Dalla Chiesa) for his undaunted service in the face of grave personal risks. In 1985, The Times of London lauded him as a “Mafia stalker.” And in 1999, he was named Grand Officer of the Order of Merit of the Italian Republic by the President of the Council of Ministers.

In addition to his distinguished government career, Judge Imposimato served as a professor of criminal procedure on the faculty of the Sapienza University of Rome and as a lecturer at the University of L'Aquila in central Italy. He contributed to humanitarian and ecological causes, serving as a president of TRIO (the Transplant Recipients International Organization) as well as a director of the Eurispes Observatory on Organized Crime in Italy, which addresses fraud and illegality in the country's agri-food chain.

He published extensively in the final years of his life. According to the Online Computer Library Center, Imposimato contributed 30 articles to 81 publications, at least 13 of which were books. He wrote in-depth pieces about his conviction that much of the upheaval suffered by Italians in the Years of Lead was rooted in the post-WWII NATO Operation Gladio, which entailed the long-term presence of “stay-behind” forces, ostensibly to guard against offensive moves by the Soviet Union.

He described the violent events as a “strategy of tension” designed to create an atmosphere of fear and chaos, which fostered support for preemptive military actions. 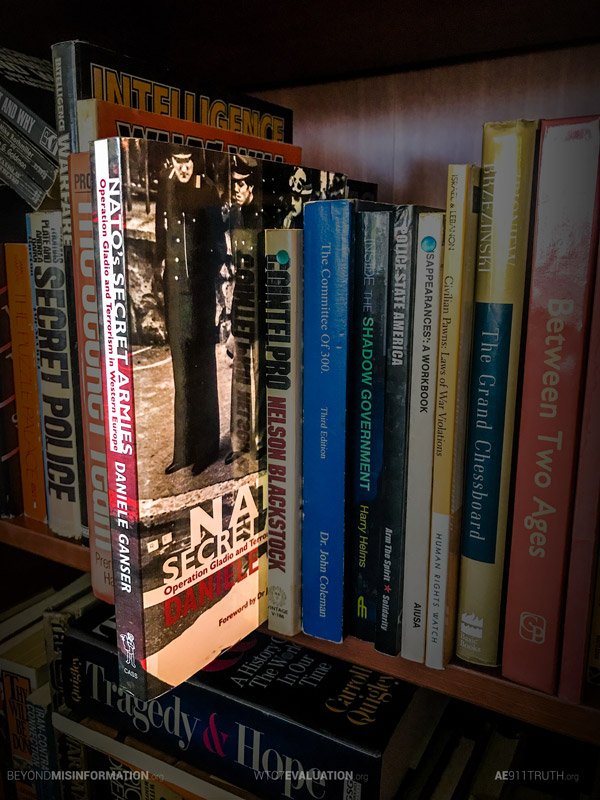 “[T]he 9/11 events were an instance of the strategy of tension enacted by political and economic powers in the USA to seek advantages for the oil and arms industries.” According to Imposimato, the events of 9/11 constituted an “American Gladio” and were designed to raise support for the US-led invasion of Iraq.

We have communicated with three people who worked closely with Judge Imposimato in recent years: Barbara Honegger, Jane Clark, and Adam Buckley, each of whom expressed enormous respect and admiration for this one-of-a-kind man.

Buckley first met the judge while collaborating with Graeme McQueen on translations of the September 2011 Toronto 9/11 hearings. From there he went on to work regularly with the judge, assisting with English translations and facilitating international contacts. “He was an incorruptible and honest man,” Buckley recalled. “As a judge, he was a promoter of justice and truth. He had a remarkable mind and great courage. He was also a gentleman and, despite his age, an innovator. He was very down to earth and respectful of people in general, and he worked 'til the end to establish the truth of all that was behind 9/11.”

Honegger, currently a member of the Lawyers' Committee for 9/11 Inquiry's grand jury petition research and drafting committee, observed, “The greatest tribute we can give to Judge Imposimato is to carry out his vision and his work and, as he did, to give all our energy to the quest for truth and justice for the victims of 9/11.”

Clark seconded that point: “He would encourage us to continue our investigations into the injustice done to those families of 9/11 wholeheartedly.”

Asked what she would say to Judge Imposimato in parting, Clark wrote: “I would say . . . that 'it was a great privilege to have worked with you and known you.' I have no doubt in my mind that in his passing, the Good Lord will say to him, 'Welcome, good and faithful servant.' He will be greatly missed by me, and I am saddened by his passing. I would say to him, 'I loved who you are, what you have done, and what you represented in law and civil rights on this earth.'” 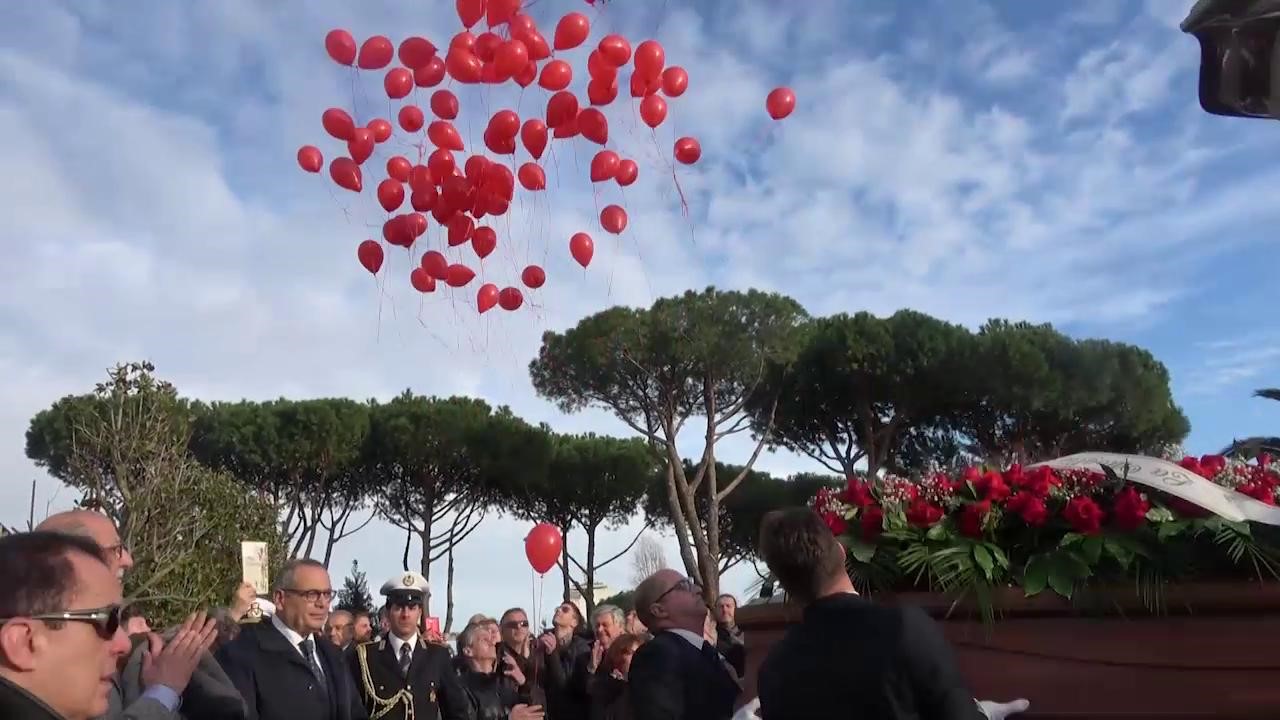 At Judge Imposimato's well-attended funeral service, held January 4, 2018, in Rome, as pall bearers brought his casket out of the church, fifty red balloons were released into the sky over the city.