Matt Campbell—who lost his brother, Geoff, on 9/11—gave this moving and hopeful speech in front of the U.S. Capitol on September 11, 2018. We are grateful to Matt for traveling all the way from the United Kingdom for this year’s 9/11 anniversary and we are honored that we could provide this opportunity for him to speak about the need for perseverance as we march onward in the pursuit of truth and justice.

Seventeen years ago today, my brother Geoff was murdered.

As Richard said, he was on the 106th floor of the North Tower. He was attending a Risk Waters conference. There was once three Campbell brothers; now there’s only two. And I miss him. We all do.

This year, I am pleased to be a signatory of the grand jury petition and the Bobby McIlvaine Act.

Whenever the authorities are involved in murder and its subsequent cover-up, it’s only through the determination and perseverance of family members and individuals that truth and justice can have any chance of prevailing, even when the chances of succeeding appear to be slim. I’d like to give you an example of what inspires me.

Over 46 years ago, in Northern Ireland, 28 civilians who were on a protest march were shot by the British army. Fourteen people died, six of whom were only 17. The youngest injured was only 15. That day, in Derry, Northern Ireland, in 1972, became known as Bloody Sunday.

I’d like to mention some of the parallels, because I think they’re interesting, between 9/11 and Bloody Sunday, some of which I’ve personally experienced myself.

For example, how the media, politicians, successive governments close rank when challenged about official narratives, and how they basically choose to ignore you.

Bloody Sunday had the Widgery Tribunal, which was an inquiry led by the Lord Chief Justice Widgery. This is the highest legal authority—individual—in the country.

The report he produced largely cleared the soldiers and British authorities, and instead blamed the march organizers and claimed all the victims were either gunmen or bomb throwers. Not a single eyewitness testimony was considered, other than that of soldiers.

The cover-up began hours after the shootings, beginning with the captain of the regiment compiling a shot list, which was a fraudulent list identifying the victims as either gunmen or nail bombers.

The very next day, the Prime Minister, Ted Heath, met with the Lord Chief Justice and reminded him that as well as a military war going in Northern Ireland, there was a propaganda war going on and that he should do his duty.

Even when the report was being drafted, someone wrote by hand on a copy that the Lord Chief Justice will pile up the forensic evidence against the deceased.

Now remember, this is supposed to be an independent and fair inquiry.

So when the Widgery Report was published, and all the victims were labeled as terrorists, Bloody Sunday became a catalyst for a massive increase in “The Troubles” in the UK—mainland UK—and Northern Ireland.

We’re 17 years on now. I take inspiration and hope that for the Bloody Sunday victims, the families didn’t really get together in terms of campaigning for truth and justice until 20 years after the event. And they campaigned for a new inquiry, the quashing of the widely discredited Widgery Report, and to give the victims their innocence back, because they were labeled as terrorists.

On the 20th anniversary, a book was published—so this is in 1992—a book was published by a journalist and activist and now Irish politician called Eamonn McCann. And this, along with the effort of many individuals and campaigns, resulted in Tony Blair, the then-Prime Minister in 1998, announcing a new inquiry—an inquiry that actually led to the former Prime Minister, Ted Heath, taking the witness stand and being examined, and also the captain who compiled that fraudulent shot list, who, at the time of the new inquiry, was the head of the British Army.

Twelve years later—it seems an awful long time, it was nearly four decades on—in 2010, the original inquiry was quashed, and the victims exonerated. The report’s findings were made public, and the actions of the British army were ruled “unjustifiable and unjustified.”

And only after the publication were the police—I mean, get this: only after publication 40 years on—were the police allowed to investigate the crimes for the very first time. The prosecution services is, as we speak 46 years on, assessing what legal criminal action can be taken.

And as Ted Walter said to Julieann in a recent visit to the Bloody Sunday museum in Derry, “The 9/11 Commission Report is our Widgery.”

And I’d just like to finish off with just reading—it’s almost the last page of this book—and it’s Eamonn McCann, the activist, the journalist, Irish politician, reflecting on the campaign:

“Nothing mattered, as far as the families were concerned, as long as they won their loved one’s innocence. In the process, however, they have become emblematic of the need for people to persist in campaigning for truth and justice. In the end, that might be the legacy of the Bloody Sunday Justice Campaign, the extent to which it enables people elsewhere faced with impossible odds to look at the Bloody Sunday campaign and say of their own campaign, ‘Let’s keep on—this might just f--king work.’”

So let’s keep on. Thank you. 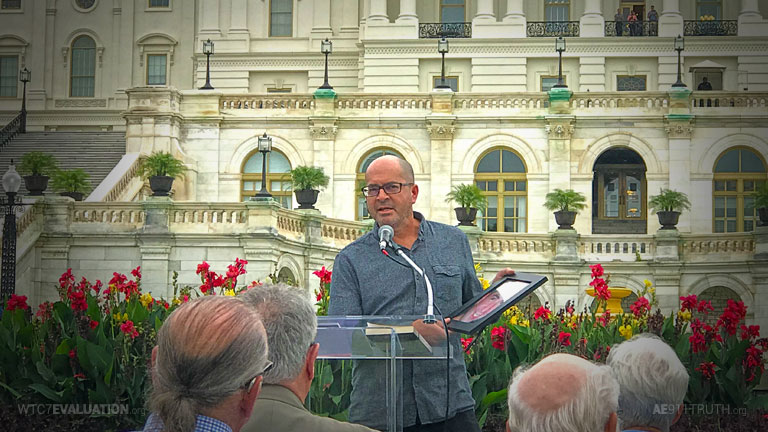