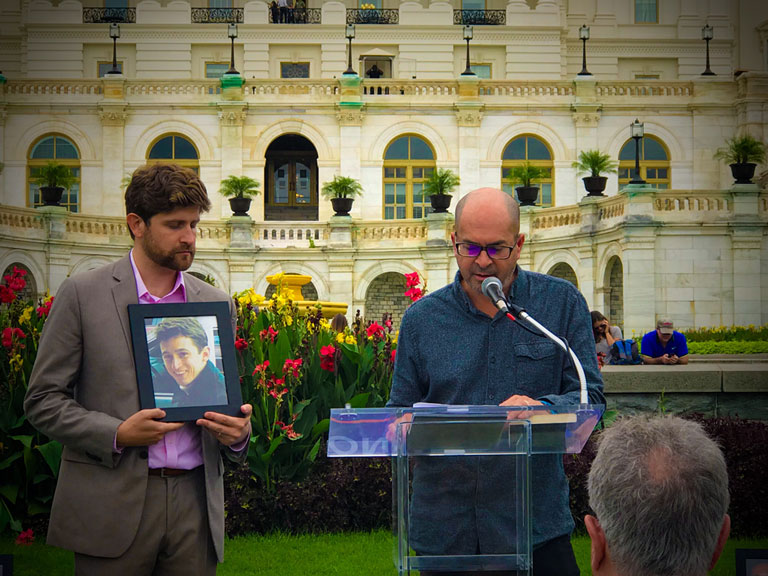 The AE911Truth team recently returned from an inspiring series of events we held on September 11, 2018, in the heart of the nation’s capital. 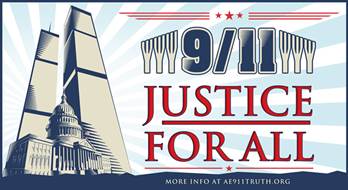 We were joined by a handful of eloquent and moving speakers — including British 9/11 family member Matt Campbell — and by dozens of dedicated activists from the Washington, D.C., area. The latter are fortunate to be stationed where they can speak their message face-to-face with elected officials who’ve failed, for 17 long years, to properly investigate the crimes at the World Trade Center.

This is the story of how we came together to remember the nearly 3,000 people who were murdered that day and to reassert the worldwide demand for 9/11 truth and justice.

Morning at the White House

Our first action of the day was at 10:00 AM outside the White House, led by our intrepid operations manager, Andrew Steele. Why the White House? Because Donald Trump — then candidate Trump — promised on February 15, 2016, that under his watch we would “find out who really knocked down the World Trade Center.” 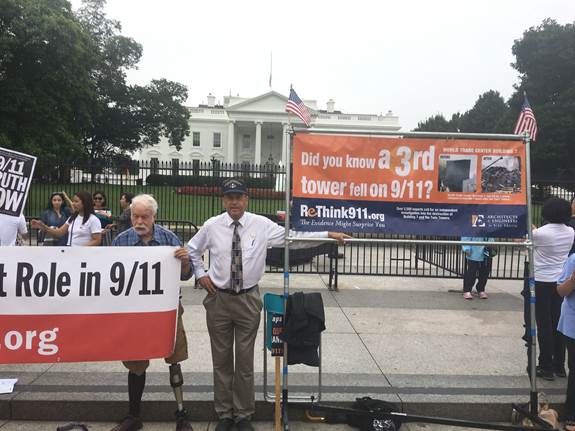 Karl Golovin, Lou Wolf, and Diana Castillo are among the dozen ever-present, hard-working crew of DC911Truth. They were a part of AE911Truth’s action at the White House on September 11th, exhorting the president to get to the bottom of 9/11 as promised.

Thus, we came to implore the President to make good on his promise and to hold the FBI accountable for its refusal to investigate the use of explosives in the destruction of the three World Trade Center towers (and this despite the FBI’s former assistant director of counterterrorism acknowledging, in writing, the “thorough research and analysis” of AE911Truth).

While in front of the White House, we distributed 1,000 palm cards to tourists, which informed them of the Bobby McIlvaine Act and the pressing need for an unbiased investigation of the WTC destruction.

"We had to be right there in front of the White House," observed Steele. "If not to wake up our sleeping President, then at least to educate the hundreds of tourists there, who seemed especially eager to listen.”

Agreed Diana Castillo of the DC 9/11 Truth group: “This is what we need to be doing, not only in D.C. but around the world.”

My sense, based on the reactions of onlookers, is that the world is ready. All we need is the right catalyst — a major political event of some kind — and the dam will break.

Afternoon at the Capitol Building

Our first-ever rally at the U.S. Capitol, which we titled 9/11 Justice for All, took place at 2:00 PM. We ignored the forecast of thunderstorms and went ahead undaunted. 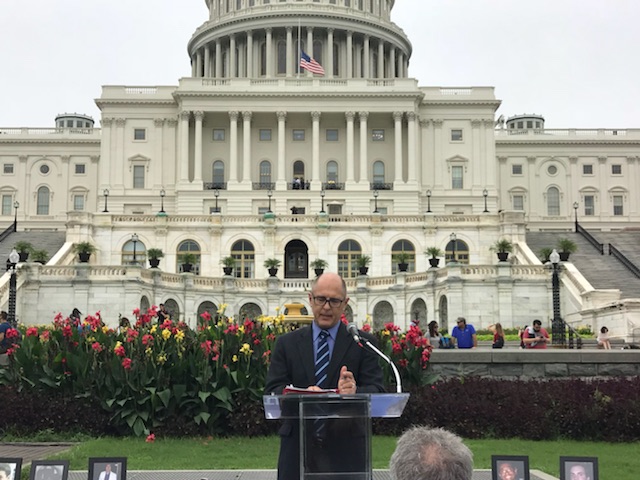 Richard Gage led off the afternoon rally. Behind him stood photos of several 9/11 victims whose families are campaigning with AE911Truth for a new WTC investigation.

And we could not have chosen a better spot at the Capitol: right there on the west lawn directly in front of the massive marble steps leading up to the House and Senate chambers.

I opened the event by explaining our main reason for being at the Capitol: “We need to be visible, right here in front of our 535 members of Congress who were elected to represent us, but who so far have been negligent in seeking — or even being willing to listen to — the truth about 9/11.” Yes, we are raising the stakes!

We were thrilled to have Lionel of “Lionel Media” give the first of the afternoon's powerful speeches. With his usual penetrating wit, Lionel lit up the stage by skewering both those who are unwilling to ask the most basic questions about 9/11 — such as, “Where’s the plane?” (think Shanksville) — and those who ridicule other people for daring to ask such questions. 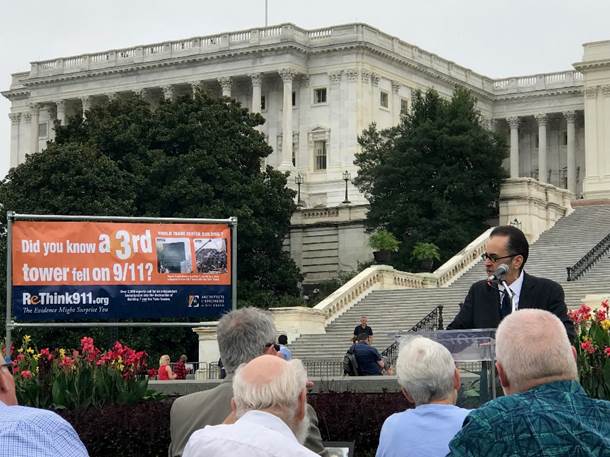 Lionel urged the crowd to never be afraid of asking taboo questions and to never be intimidated by those who ridicule anyone for asking such questions.

According to Lionel, many people refuse to look deeper than the official 9/11 narrative on the grounds that there isn’t a coherent alternative theory of “whodunit.” But he countered that argument with this line of legal reasoning: “Before I get to who did it, I got to get to what it was they did?! It’s a simple question. . . . All I’m saying is that we need more of an investigation. And that’s all we’re asking for.”

After Lionel spoke, I provided a summary of my recent pungently worded letter to President Trump, which had been sent in concert with letters from 25 other 9/11 Truth leaders and researchers. In it, I admonished him to pursue his correct hunch — arrived at on the day of 9/11 — that “explosives had been placed in the building.” I also recited 16 questions from my letter that point to the indisputable evidence of controlled demolition, which cannot be explained by the government's premise of a fire-induced, gravity-driven collapse.

Then I introduced Matt Campbell, who lost his brother Geoff on the 106th floor of the North Tower 17 years ago and who traveled all the way from the U.K. to the U.S. capital. Matt was there on behalf of all the 9/11 family members who have endorsed the Bobby McIlvaine Act.

In his speech, he stirringly invoked the successful struggle of the Bloody Sunday families as inspiration and guidance for the 9/11 family members and activists who continue against all odds to fight for truth and justice. 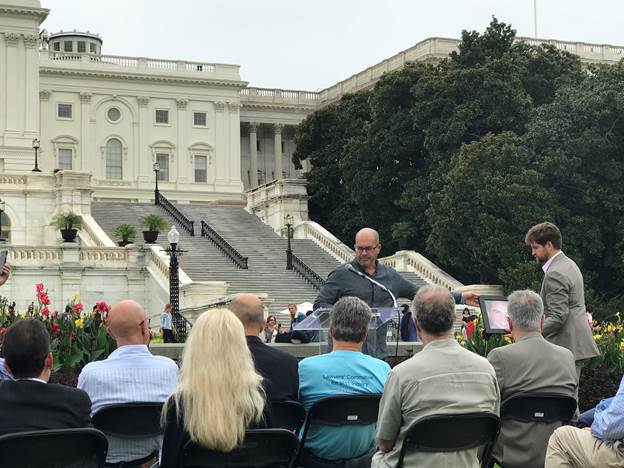 Matt ended his remarks with a rousing quote from Irish activist, journalist, and politician Eamonn McCann: “In the end, that might be the legacy of the Bloody Sunday Justice Campaign, the extent to which it enables people elsewhere faced with impossible odds to look at the Bloody Sunday campaign and say of their own campaign, ‘Let’s keep on — this might just f--king work.’”

Next Matt read a series of heart-wrenching statements from other 9/11 family members who could not be in attendance that day. They included Bob McIlvaine, whose son Bobby was killed by an explosion while entering the North Tower's lobby before the building came down. It is in Bobby's honor that the above-mentioned proposed legislation for a new WTC investigation has been named.

Bill Brinnier, a New York architect, then took the stage to honor his best friend, Frank DeMartini, who was the construction manager at the World Trade Center and was killed on the 88th floor of the North Tower.

Bill spoke about his friendship with Frank with great fondness and about the 9/11 Truth community's need for perseverance. He also drew from the technical knowledge he had acquired during his frequent visits with DeMartini to the World Trade Center. And he described his journey from uneasy acceptance of the official explanation to his current position of challenging that false explanation with everything he’s got. 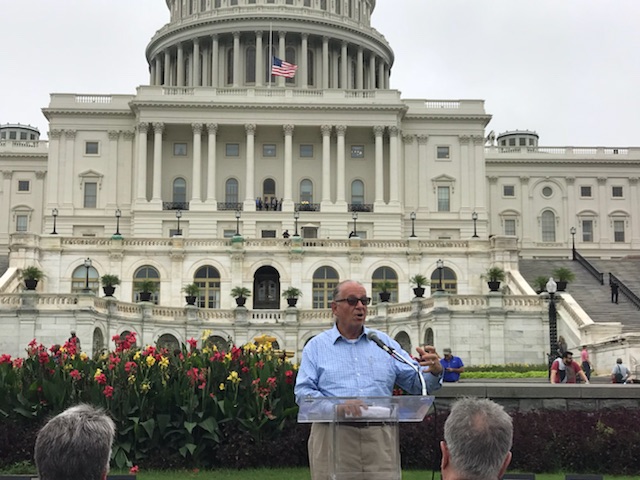 Architect and AE911Truth petition signer Bill Brinnier spoke fondly of his best friend Frank DeMartini, who was construction manager at the World Trade Center and who died on 9/11.

At the conclusion of our rally, we organized our "troops" and enlisted 16 volunteer "soldiers" to head over to the six Senate and House office buildings. 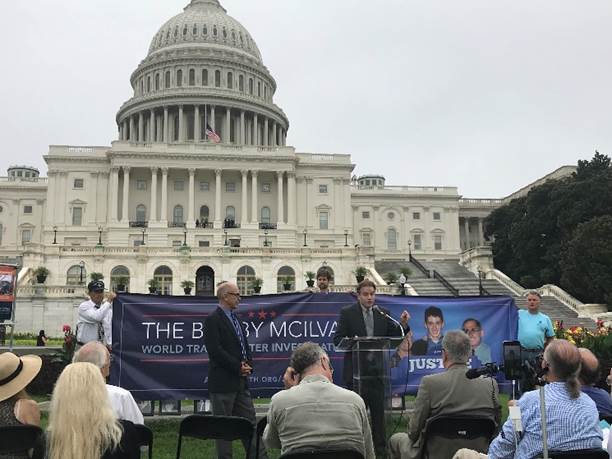 AE911Truth’s Andy Steele and Ted Walter organized the crowd into six separate groups for the purpose of delivering our literature to all 535 congressional offices immediately after the 2:00 PM rally concluded.

With only an hour to go before legislators' offices closed for the day, we delivered our petition (signed by more than 3,000 architects and engineers) and literature about the Bobby McIlvaine Act to all 535 members of Congress (plus six delegates).

This marks the second year in a row, and the fourth time since AE911Truth's founding in 2006, that we’ve hand-delivered our materials to every senator and representative. Our goal, as it has been since we launched the Bobby McIlvaine Act on September 11, 2017, is to find at least one legislator with the moral fortitude to introduce the Act, trusting that this one act of courage will be the catalyst that sparks a nationwide conversation. 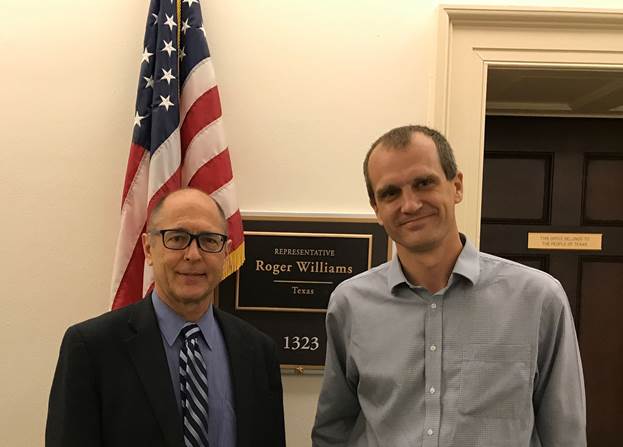 Richard Gage and dedicated AE911Truth volunteer Josh Willis took part in the coordinated effort to deliver our petition and Bobby McIlvaine literature to all 535 members of Congress in one hour. Josh has repeatedly visited and contacted his local congressman, Rep. Roger Williams of Texas, since the launch of the Bobby McIlvaine campaign.

If you haven’t already done so, you can easily contact your congressperson and two senators on our Bobby McIlvaine webpage. We’re counting on you to take this simple action that could make the difference in getting the Bobby McIlvaine Act introduced.

Evening at Busboys and Poets

After our afternoon at the Capitol was over, we rushed over to our evening venue, Busboys and Poets — quite possibly the trendiest joint in Washington’s entertainment district! We kicked off the night with the rousing music of Jordan Page, the avant-garde, patriot singer-songwriter. And, as we suspected he would, he brought the house down! 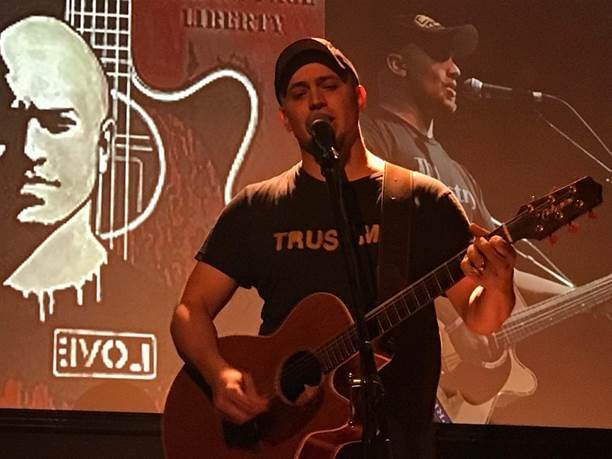 Jordan Page was clearly the hit of the evening event at Busboys and Poets.

Not surprisingly, the crowd favorite was Jordan's song about World Trade Center Building 7, which pulsated with the catchy chorus, “What ever happened to Building 7? . . . Each and every war was founded in deception.”

Most of our speakers from earlier in the day — Matt Campbell, Bill Brinnier, and I — each took the stage once again. We were joined by other speakers, including Oscar Abudara Bini, an Argentine researcher of many false-flag attacks that have spanned the past 15 years (he flew all the way from South America to D.C. to share his research!) and Robert David Steele, who coordinated the delivery of 26 letters to President Trump from leaders in the 9/11 Truth Movement (mentioned above). 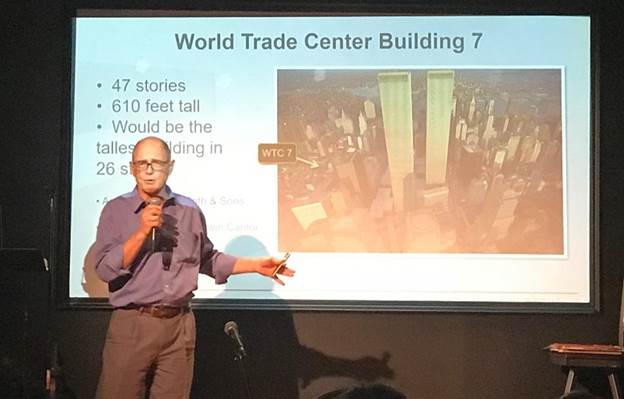 Richard Gage, AIA, insists that every 9/11 Truth advocate needs to know the details about the controlled demolition of Building 7, which he calls “the smoking gun of 9/11!”

Late Night on the Radio

Last but not least, George Noory of Coast to Coast AM radio got an earful of the WTC evidence late into the night of the 9/11 commemoration. Actually, it was 9/12 by the time I awoke at 3:00 AM Eastern with the goal of ensuring that a nationwide audience of two million listeners would hear the truth about 9/11 through this far-reaching interview. 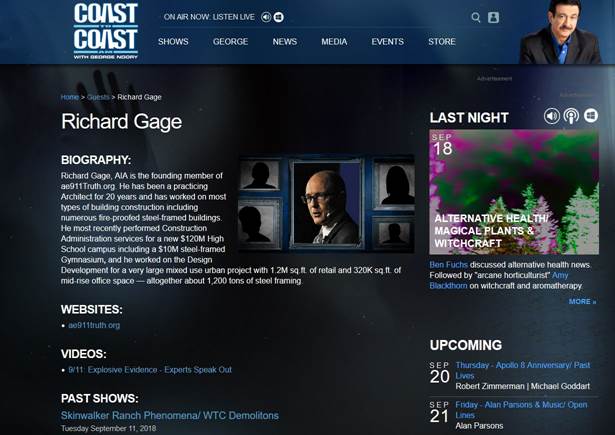 Though he's a friend of 9/11 Truth, Noory nevertheless peppered me with a barrage of tough questions right up front. As in my previous interviews with him, I responded with straightforward, succinct answers about the WTC forensic evidence and its difficult-to-admit implications. Most of the callers were supportive of our work and asked outstanding questions.

In his speech earlier in the day, our friend, colleague, and leading 9/11 family advocate Matt Campbell articulated the very reason we continue to fight 17 years later: “Whenever the authorities are involved in murder and its subsequent cover-up, it’s only through the determination and perseverance of family members and individuals that truth and justice can have any chance of prevailing, even when the chances of succeeding appear to be slim.”

I know Matt is right, for I have you to thank for your determination and perseverance! Please visit our Bobby McIlvaine page to find out how you can be a part of this winning, world-changing campaign.