On the 18th anniversary of 9/11, CNBC senior analyst and former anchor Ron Insana went on Bernie and Sid In the Morning on New York’s 77 WABC Radio to share his haunting experience of that horrible day.

Approximately eight minutes into the interview, Insana made a statement regarding the 47-story World Trade Center Building 7 — which collapsed late in the afternoon of 9/11 — that is truly stunning, especially considering his access to the scene and his job as a prominent news anchor:

“Well, remember 7 World Trade had not yet come down. And so when I went down to the [New York Stock] Exchange that Wednesday morning [September 12], I was standing with some military and police officers, and we were looking over in that direction. And if it had come down in the way in which it was tilting, it would have wiped out everything from where it stood to Trinity Church to the Exchange to, effectively, you know, the mouth of the Hudson. And so there were still fears that if that building had fallen sideways, you were going to wipe out a good part of Lower Manhattan. So they did manage for one to take that down in a controlled implosion later on. And the Exchange was up and running the following Monday.” [Emphasis added.]

Before addressing questions about Insana’s timeline, let us establish the aspects of his story that are clear and unambiguous. First, he clearly identifies Building 7 as the building he is talking about. Second, he clearly states that Building 7 was taken down in a “controlled implosion,” which flatly contradicts the official explanation that it collapsed due to office fires. 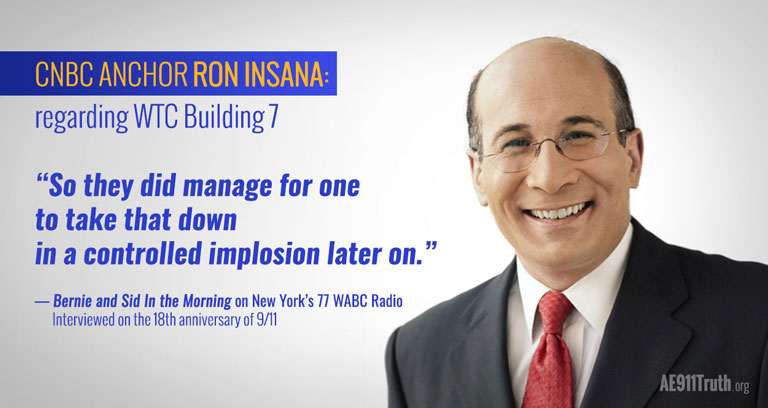 On the 18th anniversary of 9/11, CNBC senior analyst and former anchor Ron Insana went on Bernie and Sid In the Morning on New York’s 77 WABC Radio to share his haunting experience of that horrible day.

Insana’s matter-of-fact remark is particularly significant because the manner in which he delivers it and the context in which he came to believe that Building 7 was brought down in a "controlled implosion" suggest that he was told this information and that it may have been fairly common knowledge at the scene. (The only other possibility is that he deduced it was a “controlled implosion” based on his own observation of it.) Indeed, Insana is not the only person to report that a demolition of Building 7 was being considered or was imminent.

For instance, FDNY Lieutenant David Restuccio told MSNBC’s Brian Williams just minutes after the collapse: “We had heard reports that the building was unstable and that eventually it would either come down on its own or it would be taken down.”

Another is volunteer EMT Indira Singh, who, in 2005, told radio host Bonnie Faulkner: “All I can attest to is that by noon or one o’clock they told us we had to move from that triage site up to Pace University a little further away because Building 7 was going to come down or being brought down.” Faulker replied, “Did they actually use the word ‘brought down,’ and who was it that was telling you this?” “The fire department, the fire department,” Singh answered. “And they did use the word ‘we’re going to have to bring it down.’”

Then there are the unidentified construction workers and law enforcement officers captured on video just moments before the collapse, saying: “You hear that?” “Keep your eye on that building. It’ll be coming down.” “The building is about to blow up, move it back.” “We are walking back. There’s a building about to blow up. Flame, debris coming down.”

Insana’s statement is all the more remarkable because it appears that he is unaware of the debunked official story of Building 7’s collapse — according to which office fires leveled a skyscraper for the first time in history — and of the controversy that this story has caused over the past 18 years. Insana might be surprised to learn that there is controversy at all, given what he appears to have been told during his reporting and given the manner in which Building 7 came down — namely, that of a perfectly executed controlled demolition. 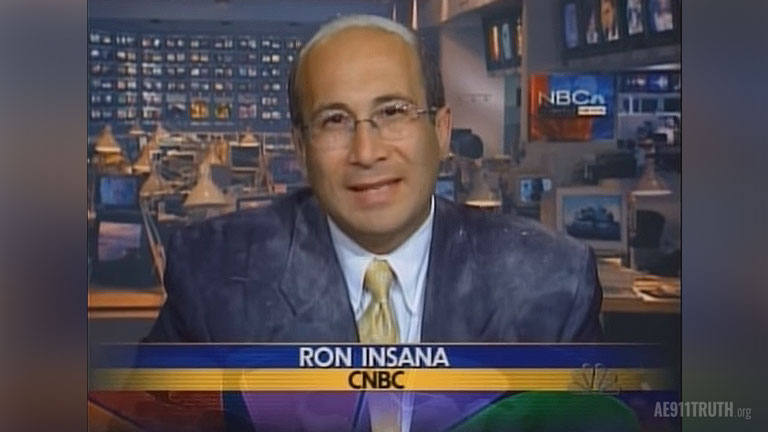 Ron Insana, covered in pulverized concrete from the explosive demolition of the Twin Towers earlier that morning, reports from NBC’s studios on September 11, 2001.

Now for the confusing aspects of Insana’s timeline. Building 7 collapsed at 5:20 PM on Tuesday, September 11, 2001. He says he went down to the Financial District on the morning of Wednesday, September 12, where he looked in the direction of Building 7.

There appear to be three ways to make sense of what he said (assuming he is speaking honestly, which there seems little reason to doubt).

One, when he talks about looking in the direction of Building 7, he could mean that he was looking at the debris pile of Building 7, which had already been brought down neatly into its own footprint. In this scenario, he and others were inferring that if the building had tipped over instead of having been brought down, which had already occurred, it would have done significant damage to the surrounding area.

Two, he may have gone down to the Financial District and had the conversation he describes before 5:20 PM on September 11, rather than on September 12. This scenario seems the least likely, though, because he is very specific about not going back down to the stock exchange until September 12, having already made his way up from the scene to NBC’s midtown headquarters by midday on September 11. (Insana’s first appearance in the studio on September 11 was around 12:41 PM, when he vividly described how the first tower had “started to explode.”)

One can only hope that Insana clarifies his story, but the real question for Insana and CNBC is this: Who told him that Building 7 was brought down in a “controlled implosion”? And, for the countless reporters and government officials who were at Ground Zero in the hours and days after the attacks, how many of them were told that Building 7 would be demolished or had been demolished, and why have they not come forward with that information?

Sadly, it is all too likely that the same media malfeasance that has managed to suppress the truth about the destruction of the Twin Towers and Building 7 for 18 years will manage once again to ignore or explain away this newest revelation. But for those of us who exist in reality and care about truth, this revelation — which is merely one of countless corroborating pieces of evidence — will not be ignored or misconstrued.

The only correct way to understand this revelation is that Ron Insana — a reporter who intimately covered the events in New York City on 9/11, such that those events are seared into his mind and he received an Emmy nomination for his reporting — believes that Building 7 was brought down in a “controlled implosion,” most likely based on what he was told by authorities at the scene.

Help spread this news far and wide by donating to our Ron Insana video and press release. Your gift will help recoup the cost of producing the video and issuing the press release — and will enable AE911Truth to continue carrying out these projects in the future. Donate Today >

AE911Truth is grateful to our supporter who heard Ron Insana’s interview and sent it to us on September 17, 2019. The full interview can be heard on Bernie and Sid in the Morning. So far, Mr. Insana has not responded to our request for comment.