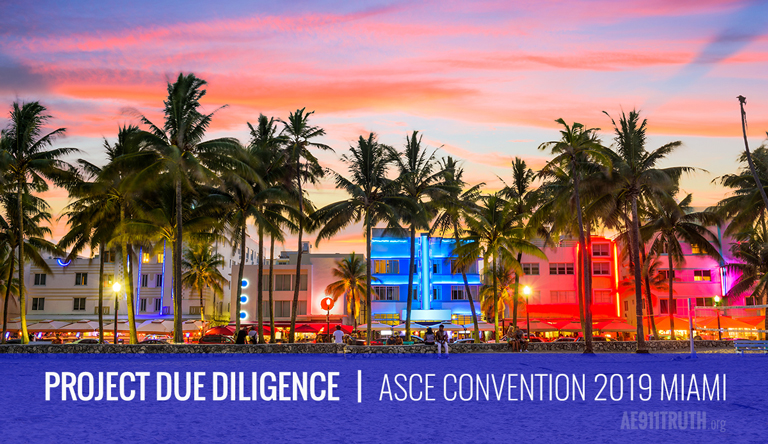 The American Society of Civil Engineers is afraid — and that’s a good thing, according to Roland Angle, head of AE911Truth’s Project Due Diligence.

The leadership of the ASCE has begun threatening to expel PDD representatives from national conferences for sharing information critical of the official account of the World Trade Center’s destruction on 9/11. Organizers were especially aggressive at the most recent conference, the ASCE 2019 Convention, held October 10–13 in Miami, Florida.

“They did everything they could to discourage us, including threatening to have us thrown out of there,” says Angle. “But I see this as a good sign. The ASCE is only scared of things that represent a real threat to them.”

The ASCE has good reason to fear scrutiny given the role they played in promulgating the official story, Angle adds. Not only did they give their tacit stamp of approval to the destruction of forensic evidence at Ground Zero but they also contributed to FEMA’s fatally flawed 2002 “World Trade Center Building Performance Study” and to their publication of deceptive peer-reviewed papers on the towers’ destruction by Zdeněk Bažant.

“So they’re going to oppose us every step of the way. We expect that.”

At the first conference that PDD volunteers attended — the Forensic Engineering Congress in Austin, Texas, in November 2018 — the ASCE’s approach was to ignore them. But, as Angle recalls, that hands-off approach didn’t last.

At the next conference attended by PDD volunteers — the Structures Congress in Orlando, Florida, in April 2019 (organized by ASCE’s Structural Engineering Institute) — the ASCE started paying more attention and even used a clause in its contract with the hotel hosting the conference to block PDD from using a room in the same hotel for its presentation on the WTC controlled demolition evidence.

By the third conference, in Miami last month, security staff threatened to eject Project Due Diligence volunteers from the conference if they didn’t stop distributing brochures to participants, even though all four had paid the $1,000 fee to attend and even though the ASCE encourages “networking” among its members. It had already denied PDD permission to make a presentation at the conference.

The volunteers had two main objectives: to engage with attendees by sharing the PDD brochure and WTC message with as many fellow engineers as possible, and to get as many attendees as possible to come to the PDD presentation on the destruction of the three WTC high-rises during the final evening of the conference.

Though the foursome was pleased to have distributed brochures to more than half of the 600 conference-goers, only a handful came to the presentation, which was held at a nearby hotel. (In April, the proportion was similar.) But despite the numbers being low, the response from PDD presentation attendees has been uniformly positive at all three conferences.

In fact, no one at any PDD event has ever significantly objected to any of the information presented.

“It’s a matter of trying to bring this to people’s attention,” explains volunteer Dick Lowman, who was attending his first conference for PDD in Miami. “When the people go to the presentation, they say, ‘Wow, something is wrong here. We need a new investigation.’”

This sentiment was echoed by Angle, who notes that in the 16 presentations PDD has given to more than 200 engineers, either at these conferences or to ASCE chapters throughout the U.S., “We haven’t found one single engineer who will stand behind the NIST report.”

“We haven’t found one single engineer who will stand behind the NIST report.” — Roland Angle

Angle says he finds it astonishing that about 30% of the engineers who’ve attended the PDD presentations hadn’t previously heard about Building 7.

“This means that the leadership of this organization has not promoted awareness of Building 7, the third worst structural failure in modern history, nor its repercussions or its impact for our profession,” he says. “The ASCE is supposed to be promoting the efficiency, reliability, and integrity of the organization, of the profession, and they’re not doing so.” 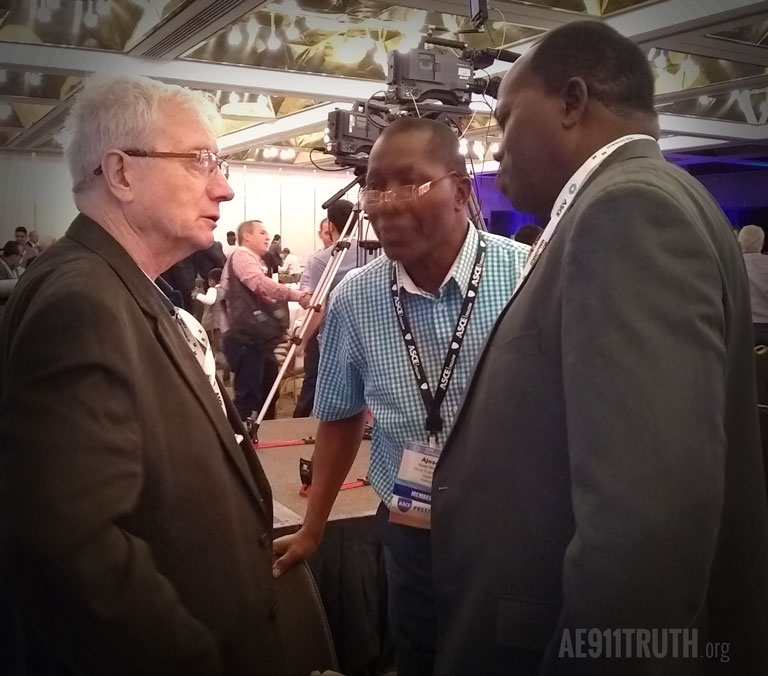 Lowman, a resident of Idaho, reports a particularly intriguing encounter he had with an engineer whose wife is employed by the ASCE and who said he was working for a “security agency” on the 10th floor of Building 7 around the time of 9/11 (although he was not in the office that day). The only tenant of the floor that matches his description is the U.S. Secret Service. This engineer theorized that the building collapsed due to damage from vibrations.

“In my opinion, that doesn’t have any validity at all,” Lowman says, adding that the man made an excuse and left when he was asked to explain why he reached this conclusion.

In addition to Lowman, the Miami PDD team consisted of Larry Cooper, who lives part of the year in Michigan and part in Florida and who was attending his third ASCE conference over the past year; Charles Coleman, from rural Washington State, who attended the last two; and Vincent Petrini-Poli from Illinois, who participated for the first time in Miami.

Coleman doesn’t sugarcoat what PDD was up against at the most recent conference.

“AE911Truth is not welcome at the ASCE convention,” he reports. “We’re legally allowed to be there, but we have to skulk around in the shadows, surreptitiously, to get people interested. It reminds me of a counterfeit watch salesman with a hundred watches in his coat attending a policemen’s convention.” 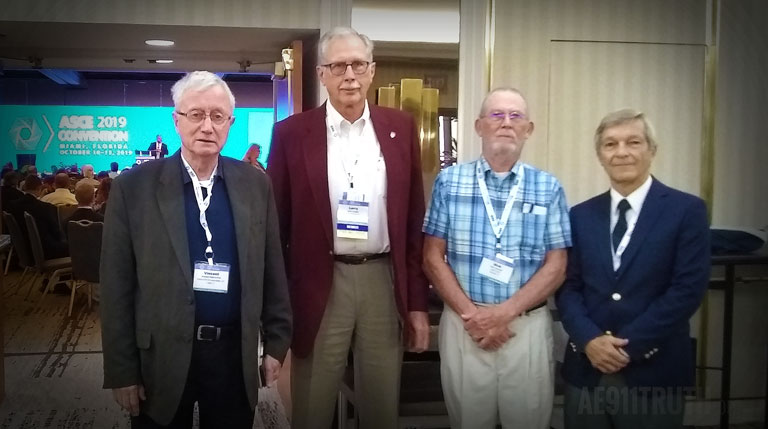 The Miami PDD team (from left to right): Vincent Petrini-Poli, Larry Cooper, Dick Lowman, and Charles Coleman.
Coleman says that all those who attended the PDD presentation were impressed, but the challenge is to get engineers to the event in the first place.

“ASCE officials have become more aggressive in making sure we don’t get our word out. We’re going to have to redouble our efforts to expose our presentation to more and more engineers.”

At one point, Coleman spoke with a structural engineering professor from Columbia University, who said he thinks the reason for the destruction of the towers has been well established and he is glad the world has moved beyond the question.

“He had absolutely no interest in the causal factors in the collapses of the three towers of the World Trade Center,” Coleman says.

Cooper recounts a conversation he had with an engineer who happened to have his own tie to Building 7, having assisted in producing the 2010 Weidlinger Associates report on behalf of the defendants in a lawsuit brought by Aegis Insurance and Con Edison against WTC 7 Properties and Cantor Engineering. The suit alleged negligence in both the design and construction of Building 7. The U.S. 2nd Circuit Court of Appeals ruled against the plaintiffs.

“He was critical of our work, but in his criticism he made statements that are not true,” Cooper says, adding that he does not think the Weidlinger report was “professionally done.”

One thing that everyone from PDD understands is that raising awareness of the WTC evidence among engineers won’t happen quickly and that success will only come from sticking with it for the long haul.

“But I think they understand now that the effort we’re mounting is consistent, it’s persistent, and it’s not going away.”