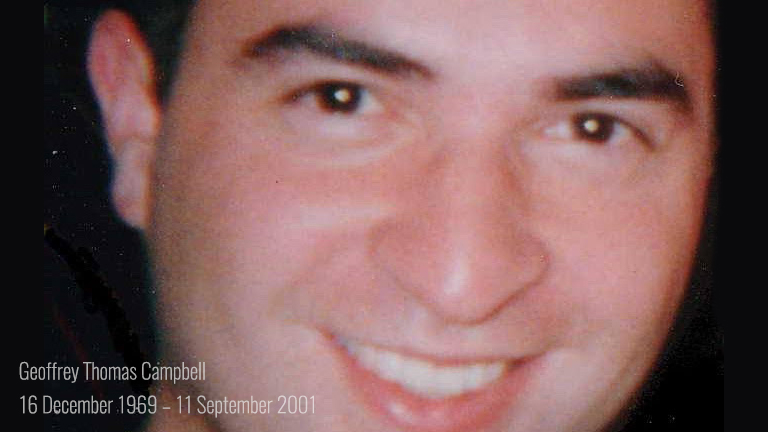 ADVISORY: UK Family to Seek New Inquest for Son Who Perished on 9/11

LONDON, UK – This Thursday, August 26, the family of Geoffrey Thomas Campbell, a British national who died in the World Trade Center attacks on September 11, 2001, will submit an application under the UK Coroners Act 1988 requesting a new inquest into his death.

The Campbell family — which includes Mr. Campbell’s parents, two brothers, and former fiancée — seeks the new inquest amid significant evidence that was not heard by the coroner at Mr. Campbell’s first inquest in 2013.

The family contends that the unheard evidence contradicts key details in the coroner’s findings — specifically, that the impact of the aircraft into World Trade Center 1 was the cause of the building’s subsequent total destruction (in which Mr. Campbell perished). They allege that the unheard evidence overwhelmingly supports the conclusion that the destruction of WTC 1 — as well as the destruction of WTC 2 and WTC 7 — was caused by the use of explosives and incendiaries.

The Campbell family will take the first step toward obtaining a fresh inquest by submitting a nearly 3,000-page application and bundle of evidence to the attorney general for England and Wales, seeking his authority to apply to the High Court for an order granting a fresh inquest.

For a new inquest to be ordered, the family merely needs to demonstrate that evidence not considered at the first inquest may lead to a different verdict. The family does not have the burden of proving to the attorney general or the High Court that a different verdict is likely.

The Campbell family will also submit the application to the senior coroner at the West London Coroner’s Court, inviting him to consent to a fresh inquest. If he consents, the High Court can order a fresh inquest without the need for the attorney general’s authority or a court hearing.

Should a new inquest be held, the Campbell family will pursue the verdict that their son was killed in the explosive demolition of WTC 1. This verdict would not have direct legal consequences, but the family hopes that it would show the need for further public inquiries and criminal investigations that would help establish the full truth surrounding the attacks of September 11, 2001.

The Campbell family’s application to the attorney general will include witness statements from six scientific experts and from five eyewitnesses to the World Trade Center’s destruction, four of whom were first responders that day. It will also include several dozen peer-reviewed papers and documents containing original data.

Matt Campbell (brother of Geoffrey Thomas Campbell, deceased)
This email address is being protected from spambots. You need JavaScript enabled to view it.