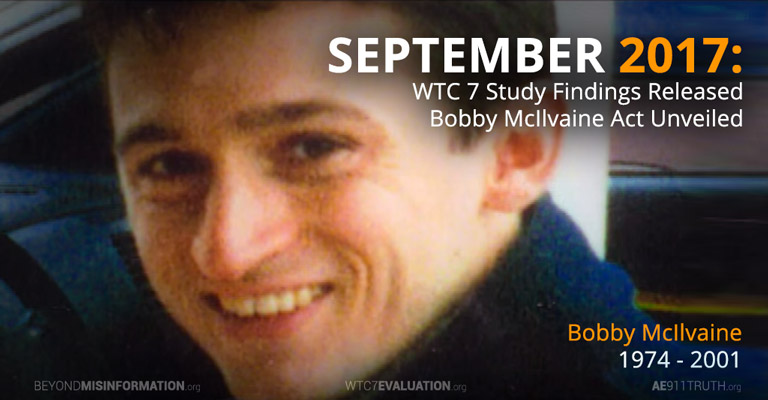 The fall of 2017 is set to become a “before-and-after” moment in the ongoing efforts of AE911Truth to educate the world and bring about a new World Trade Center investigation.

That’s because, over the course of the next two months, Dr. Leroy Hulsey will be releasing the findings of his two-year computer modeling study on the collapse of World Trade Center Building 7. At the same time, we will use his report as a vehicle both to intensify our pressure on Congress to open a new investigation and to finally hold NIST accountable for its fraudulent account of the WTC destruction.

On September 6, 2017, at 8:00 PM Eastern, Dr. Hulsey will present from the University of Alaska Fairbanks’ Schaibel Auditorium on the findings and conclusions detailed in his team’s September 2017 Progress Report, which will be issued the same day. The presentation will be livestreamed so that viewers across the country and around the world can watch.

Though originally scheduled for release in August, a draft report of the study is now on course to be issued in mid-October. A six-week public comment period will follow the release of the draft report, allowing for input from the public and the engineering community. The final report, which will incorporate constructive comments and will be vetted by peer reviewers, will then be published in early 2018.

Following on the heels of Dr. Hulsey’s presentation, Bob McIlvaine, Peter Ketcham, and Richard Gage will unveil the “Bobby McIlvaine World Trade Center Investigation Act” at 1 PM Eastern on September 11, 2017, at the National Press Club in Washington, D.C. (This press conference will not be livestreamed, but a number of journalists will be there to record the event.) Later that day and over the next two days, we will hand-deliver the Bobby McIlvaine package to all 535 members of Congress.

The Bobby McIlvaine Act, named after Bob McIlvaine’s son, who was tragically killed on 9/11 while entering the North Tower, would empanel a select committee in either chamber of Congress to reinvestigate the WTC destruction. Our goal over the next year — and beyond, if necessary — will be to find one or more members of Congress to introduce the bill. To be successful in this effort, we will need your help, so stay tuned for info on congressional outreach.

How You Can Help!

Between now and September 1st, our goal is to raise $10,000 to cover the costs of these events and other initiatives aimed at bringing attention to the WTC 7 Study and the Bobby McIlvaine Act.

Plus we’re asking you to invest in helping us produce a slick video that will be released alongside Dr. Hulsey’s draft report. It will cogently summarize his findings and show animations of the models — including a model that actually replicates the observed collapse of WTC 7 precisely.

This is the most important time of the year for our mission and perhaps the biggest moment in AE911Truth’s ten-year existence. With your support, we can raise the $10,000 we need by September 1st to make this fall a turning point in the pursuit of 9/11 Truth. Please donate generously today.

For those of you near Fairbanks and Washington, D.C., and those traveling greater distances to commemorate 9/11, we invite you to attend the events and join us on Capitol Hill. To volunteer for the latter, please email us at This email address is being protected from spambots. You need JavaScript enabled to view it..