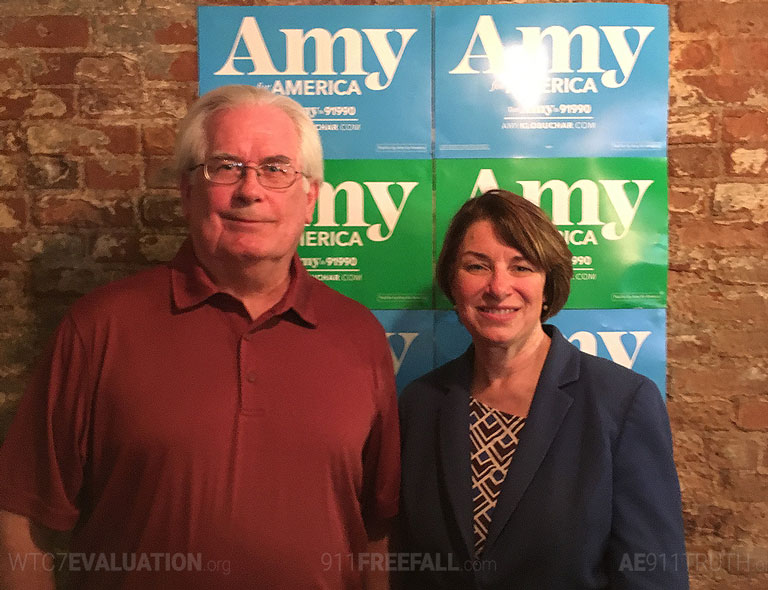 When you plant a seed, you never know what might grow.

That’s the thinking behind an initiative from Architects & Engineers for 9/11 Truth to get the World Trade Center evidence — along with the organization’s draft legislation for a new investigation, known as the Bobby McIlvaine Act — into the hands of 2020 presidential candidates on the campaign trail.

The idea was proposed by AE911Truth volunteer John O’Malley on a March installment of Andy Steele’s weekly podcast, 9/11 Free Fall. “What can we do to make 9/11 truth an issue in the 2020 election?” O’Malley asked.

The idea of approaching candidates appealed immediately to Steele, who is AE911Truth’s volunteer co-ordinator. Fortunately, volunteer Jack Bucklin from Iowa was prepared to run with the idea, so to speak. Bucklin is a 69-year-old Vietnam veteran who worked for a non-governmental organization in Guatemala for 15 years and also spent a dozen years with the U.S. Department of Agriculture.

On 9/11, he had a temporary position with the National Parks Service in Iowa and was out in the field when the Twin Towers were struck, only learning about what had happened from his supervisor that afternoon. He said he thinks that not seeing the towers come down live has allowed him to be a bit more objective than many who experienced the trauma of the event as it was happening.

It wasn’t until 2017, when Bucklin was back in Guatemala, that he came across a YouTube video about the destruction of Building 7. This new information dramatically changed his view of the event and set him on a new course to raise awareness about 9/11 as a volunteer for AE911Truth.

“It was a shock to me, just seeing the video of the Building 7 collapse,” he recalled. “It affected me fairly profoundly. I wasn’t really sleeping very good for a couple of weeks after that [because of] the ramifications of the building being brought down by controlled detonations.”

In the few weeks since Bucklin agreed to reach out to the candidates, he has achieved some truly remarkable results. As he explained when he was the July 11th guest on 9/11 Free Fall, he has so far spoken to 17 presidential candidates, two senatorial candidates, a congresswoman, and the spouse of a candidate. (He met Jill Biden, wife of former U.S. vice president Joe Biden, at a sparsely attended event in Boone, Iowa. She said she did not know about AE911Truth or the Bobby McIlvaine Act, but she accepted the material before telling Bucklin: “Keep fighting.”) 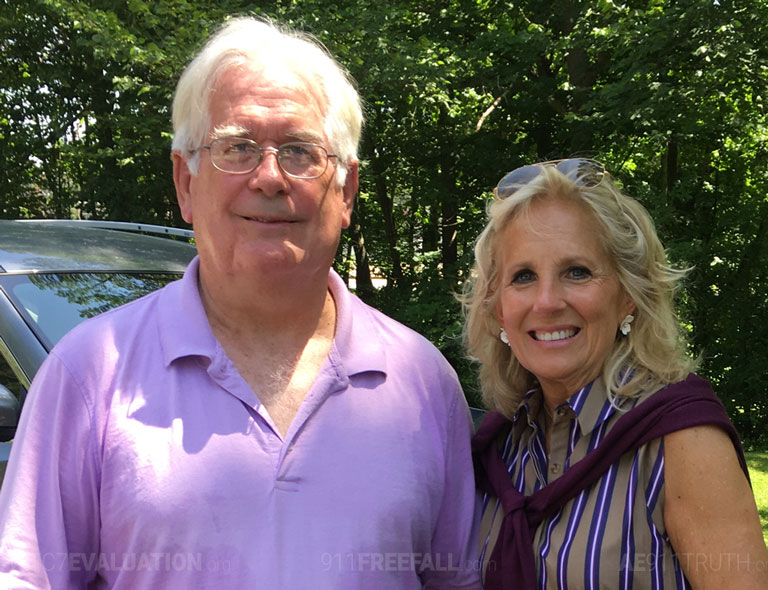 Jack Bucklin with Jill Biden, wife of former U.S. vice president Joe Biden, after speaking with her about the Bobby McIlvaine Act.

Bucklin said he finds that candidates respond well to a respectful approach, so he starts by using their formal title and adding, “It’s an honor to meet you.” This, he says, gets their attention and helps break the ice.

“When you say that, they open up right away.”

Bucklin pointed out on 9/11 Free Fall that it is important to reach out to candidates early in the campaign process, when they are more accessible. Later, when primary season gets fully underway, they have tighter schedules and tighter security.

Here are some of the candidates Bucklin has approached in Iowa and how the interactions went:

Joe Biden: After his 9/11 Free Fall interview, Bucklin was able to speak with former U.S. vice president Joe Biden, who at first thought he was being told about the James Zadroga 9/11 Health and Compensation Act. Once the actual subject of Bucklin’s approach was made clear to Biden, he took Bucklin's phone number and an aide accepted the package.

Kirsten Gillibrand: The reaction from the New York senator was both dramatic and surprising. At an event attended by about 70 people in Fort Dodge, she accepted Bucklin’s material and said she had heard “there were problems with explosions.” According to Bucklin, he met her again at a subsequent event, and this time she told him that she has spoken to first responders and the families of 9/11 victims and that she thinks a new investigation into 9/11 is needed.

[Gillibrand] told him that she has spoken to first responders and the families of 9/11 victims and that she thinks a new investigation into 9/11 is needed.

Tim Ryan: At a coffee shop in the small town of Carroll — with just six in attendance and another eight journalists — Bucklin asked the Ohio congressman if he would support the Bobby McIlvaine Act. Ryan said he hadn’t heard of it, but he took the material. A young journalist congratulated Bucklin on bringing the subject up. At a later, much larger event, Ryan spotted Bucklin again and made a point of walking up to him and shaking his hand.

Amy Klobuchar: Bucklin approached the Minnesota senator at an event at a coffee shop in Boone attended by 60-70 people. Klobuchar took the package and said: “Thank you for the work you’re doing.” Bucklin met her a second time at the Ankeny Summerfest, and she remembered him, although she hadn’t been able to read the material or look at AE911Truth’s website yet.

John Hickenlooper: Bucklin approached the governor of Colorado at an event in Boone, and Hickenlooper said he would have some down time in the next couple of days and would read the information then. When Bucklin saw him again, also in Ankeny, the candidate had not yet looked at the material.

Cory Booker: At the New Jersey Senator’s Iowa headquarters in Des Moines, Bucklin was not able to speak to the candidate but did get a package to one of his aides. Bucklin made a second attempt in Boone and that time was successful. Even more encouraging was the fact that the same aide recognized Bucklin and gave him a thumbs up.

Bill de Blasio: The New York City mayor claimed he didn’t know about AE911Truth or the Bobby McIlvaine Act, but he handed the package to his aide and told Bucklin he would have her review it. Bucklin also met de Blasio’s son, Dante, who said he, too, would read the package. In Ankeny, Bucklin encountered the mayor again, and this time de Blasio told him he wanted to talk to him as soon as he was finished speaking with the press. About an hour later, the two were talking again, with de Blasio showing considerable interest in the material and instructing an aide to review it.

“He was great with me and truly intrigued,” Bucklin says.

Marianne Williamson: The New York author and activist provided what was probably the most encouraging encounter reported by Bucklin. He met her in Cedar Rapids at an event attended by about 1,500 people. Although it was much larger than the other events he’d attended, Bucklin was still able to approach Williamson, who was seated at a table nearby. She said she knew AE911Truth and that she had even seen some of their videos. She added that she and her boyfriend had been very upset by the information contained in the videos, particularly about Building 7.

“Sometimes in her stump speech she talks about it being a fight between good and evil, and evil has got control of the United States,” Bucklin explained. “She doesn’t come out and say anything about 9/11, but she has a pretty good idea of what’s going on.

“She knows what we’re talking about. She’s a believer.”

[Williamson] said she knew AE911Truth and that she had even seen some of their videos. She added that she and her boyfriend had been very upset by the information contained in the videos, particularly about Building 7.

Pete Buttigieg: In an event attended by about 100 people in Des Moines, Bucklin lined up to meet Buttigieg, who is mayor of South Bend, Indiana. He handed him the information package, which the candidate promised to read.

During his radio interview with Bucklin, Steele made the point that there is no obligation for any of the presidential candidates to offer anything more than superficial politeness but several did seem to go well beyond that. Bucklin agrees and says he was also encouraged by the reaction he got from some of the young campaign workers he met.

“They’re in their early 20s, and they’re more receptive. They’re on social media more and they’ve probably heard more about it. Old folks like me get really upset.”

While Bucklin says that approaching candidates is a simple enough thing to do, he admits it doesn't come easily to him.

“It takes a certain amount of strength — spiritual strength — to do this, and I have to work it up to go and do this stuff. It’s not easy for me. But sometimes when I get done doing it, I feel a satisfaction, like I’m doing something important.

“I mean, every time, it’s speaking truth to power. And it should be done.”

Anyone who is interested in participating in this initiative can write to us at This email address is being protected from spambots. You need JavaScript enabled to view it.. Those who prefer to proceed on their own can download the material directly from the AE911Truth website. To download the Bobby McIlvaine Act and supplemental materials, go to ae911truth.org/justice.

Craig McKee is a member of the AE911Truth writing team and the creator of the blog Truth and Shadows.