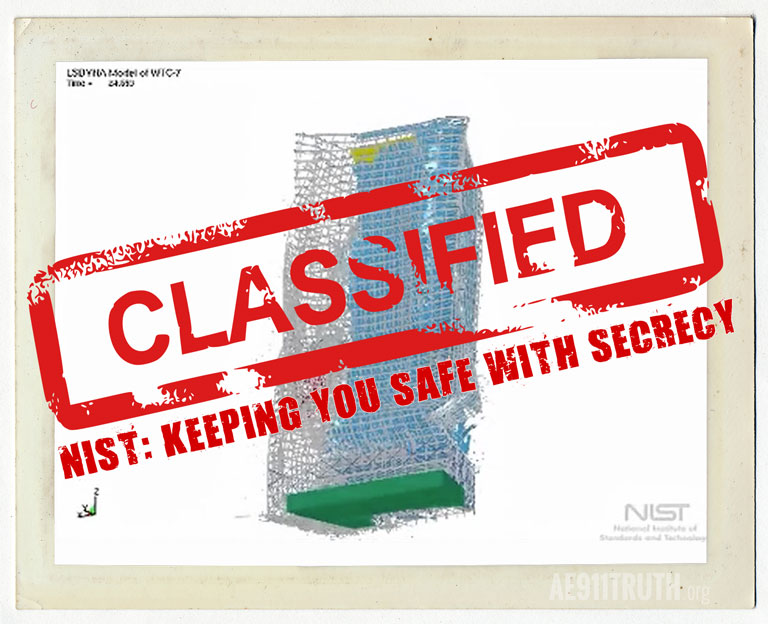 We’re not taking no for an answer.

The “no” in question has come from the National Institute of Standards and Technology (NIST) in its response to several dozen emails from the public, sent at the urging of AE911Truth, asking NIST to annul its 2009 “Finding Regarding Public Safety Information.” This policy states that certain computer modeling data and other information used by NIST in its investigation of the collapse of World Trade Center Building 7 cannot be released to the public because it “might jeopardize public safety.”

“The National Institute of Standards and Technology (NIST) stands by the conclusions reached in its WTC 7 investigation, as well as the finding under Section 7d of the National Construction Safety Team Act. Based upon this finding, NIST did not release limited and specific input and results files for certain models because they might jeopardize public safety.”

The big question is how could the release of NIST’s computer modeling data possibly jeopardize public safety?

Today, on behalf of more than 3,000 architects and engineers whose foremost duty is to protect the public's safety, we’re asking you to keep up the pressure on NIST. Please email NIST Director Walter Copan to ask him how releasing this data could jeopardize public safety and how exactly terrorists could use this data to “devise ways to destroy buildings,” as claimed by the U.S. Department of Commerce.

It's time to let NIST know that the boilerplate statements will resolve nothing and that the pressure will keep on coming.

As one AE911Truth supporter put it to NIST: “I would like to urge greater transparency in the scientific process regarding the collapse of WTC 7 on 9/11. I fail to see how withholding this information ensures any type of public safety. This looks like a deception rather than anything in the public interest.”

NIST’s stonewalling stands in stark contrast to the full disclosure of all input data, results data, and simulations used or generated during the University of Alaska Fairbanks study of Building 7’s collapse. The draft report of the four-year study was released in September, and public comments are being accepted until November 15. The final report will be released later this year.