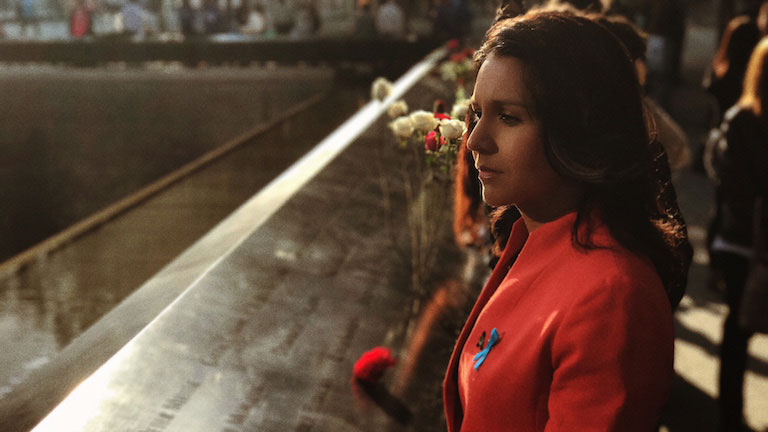 U.S. Representative and presidential candidate Tulsi Gabbard has put 9/11 in the headlines in recent weeks by joining with victims’ family members in calling for the release of documents that tie Saudi officials to 9/11.

The big question on the minds of many in the 9/11 Truth Movement, including victims’ families and first responders, is will Tulsi ever address the event that killed the vast majority of victims that day — the explosive demolition of the Twin Towers?

Indeed, on numerous occasions she has been presented with the Bobby McIlvaine Act and with the overwhelming evidence of controlled demolition — which many family members know was responsible for the death of their loved ones.

In the wake of Tulsi’s bold statements supporting the 9/11 families, it is now time to ask her if she will also stand with the families and first responders who are demanding a new 9/11 investigation.

We encourage you to include the statement signed by 19 family members as well as the resolution passed in July by the commissioners of the Franklin Square and Munson Fire District, both shown below, and ask Tulsi:

“Will you stand with the family members and first responders who are demanding a new 9/11 investigation?”

For easy copy-pasting, see our text version of the statements below.

We, whose loved ones were killed in the events of September 11, 2001, join in support of opening a new and truly independent investigation into the destruction of the World Trade Center Twin Towers and Building 7.

For eighteen long years we have waited for truth and justice. During this time, an abundance of evidence has been gathered that casts serious doubt on the official explanation for the destruction of these three skyscrapers.

We therefore call upon the U.S. Congress to enact the Bobby McIlvaine World Trade Center Investigation Act immediately. Only by conducting an open and honest investigation will the millions of people affected by this tragedy finally have the truth they deserve.

Whereas, the attacks of September 11, 2001, are inextricably and forever tied to the Franklin Square and Munson Fire Department;

Whereas, on September 11, 2001, while operating at the World Trade Center in New York City, firefighter Thomas J. Hetzel, badge #290 of Hook and Ladder Company #1, Franklin Square and Munson Fire Department of New York, was killed in performance of his duties, along with 2,976 other emergency responders and civilians;

Whereas, members of the Franklin Square and Munson Fire Department were called upon to assist in the subsequent rescue and recovery operations and cleanup of the World Trade Center site, afflicting many of them with life-threatening illnesses as a result of breathing the deadly toxins present at the site;

Whereas, the overwhelming evidence presented in said petition demonstrates beyond any doubt that pre-planted explosives and/or incendiaries — not just airplanes and the ensuing fires — caused the destruction of the three World Trade Center buildings, killing the vast majority of the victims who perished that day;

Whereas, the victims of 9/11, their families, the people of New York City, and our nation deserve that every crime related to the attacks of September 11, 2001, be investigated to the fullest and that every person who was responsible face justice;

NOW THEREFORE, BE IT RESOLVED that the Board of Fire Commissioners of the Franklin Square and Munson Fire District fully supports a comprehensive federal grand jury investigation and prosecution of every crime related to the attacks of September 11, 2001, as well as any and all efforts by other government entities to investigate and uncover the full truth surrounding the events of that horrible day.