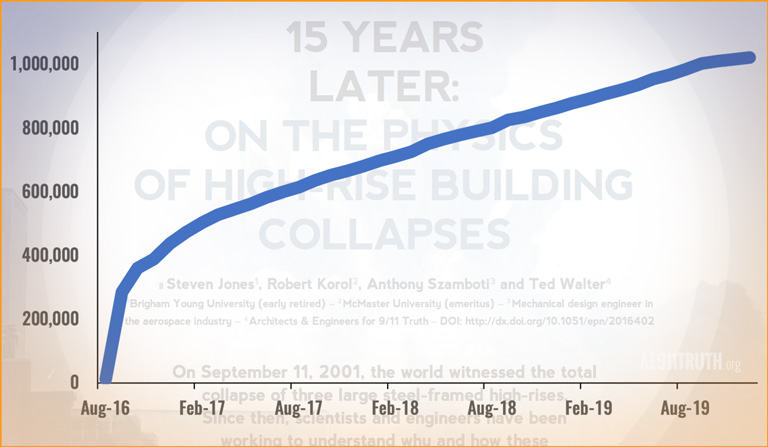 Could it be the most widely read scientific article of all time?

That question is difficult to answer because science and engineering publications do not typically share reader statistics.

What we can say for sure, though, is that “15 years later: on the physics of high-rise building collapses” — the five-page feature in the August 2016 issue of the European Physical Society’s Europhysics News by Dr. Steven Jones, Dr. Robert Korol, engineer Tony Szamboti, and AE911Truth’s Ted Walter — has been read, and continues to be read, by a massive number of people.

This past September, according to the metrics on EurophysicsNews.org, the article surpassed a remarkable one million views since being published three years earlier. More than half of those views have come since the end of 2016, with the article racking up at least 10,000 downloads per month for 36 straight months after first going viral in September 2016.

The article’s soaring popularity should come as no surprise. It authoritatively lays waste to the official account of the World Trade Center’s destruction — the most blatant and consequential scientific fraud ever perpetrated on the world. It is also one of the few times that a reputable scientific organization has had the courage and integrity to provide a forum for the issue.

Three and a half years after its publication, we at AE911Truth strongly encourage advocates of 9/11 Truth to continue using this landmark article as a tool for raising awareness.

Go to “15 years later: on the physics of high-rise building collapses.”