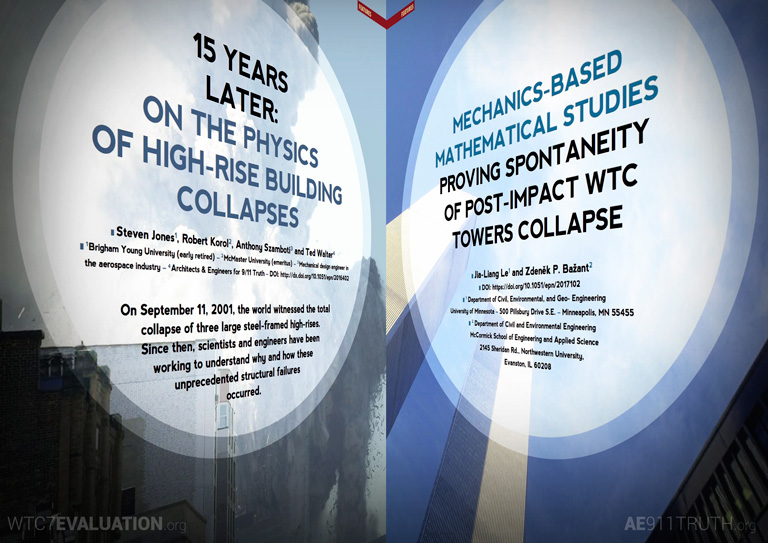 Two Years After Europhysics News: Some Unfinished Counter-Debunking and an Unpublished Letter to the Editor

Editor’s Note: This article ends with a letter to the editors of Europhysics News by engineers Robert Korol and Tony Szamboti. It is a short critique of the feature article by Jia-Liang Le and Zdeněk Bažant published in the January-February 2017 issue of Europhysics News. The editors declined to publish the letter in the subsequent issue, so it is being published here for anyone who wishes to be informed about the inadequacies of the Le/Bažant piece.

On August 24, 2016, the European Physical Society’s magazine, Europhysics News, published a feature article titled “15 years later: On the physics of high-rise building collapses,” which argued that the Twin Towers and World Trade Center Building 7 were destroyed by controlled demolition.

I was one of the four authors of this article, along with Dr. Steven Jones, a retired physics professor from Brigham Young University; Dr. Robert Korol, a professor emeritus of civil engineering from McMaster University; and Tony Szamboti, a mechanical engineer with 25 years of experience in the aerospace industry.

When the 15th anniversary of 9/11 rolled around a few weeks later, we were very pleased to see our article go viral (by the standards of science articles), jumping from just over 10,000 downloads on September 5 to 143,000 on September 13. By the end of the month, it had reached 250,000 downloads.

Today, exactly two years after “15 years later” was published, the number of downloads is over 750,000. It perennially sits atop the magazine’s “most read articles” of the past 7 days, 30 days, and 90 days, continuing to be downloaded thousands of times each week.

Not long after the article started to circulate widely on social media, members of the media whom I refer to as “demolition deniers” came out in full force to attack it. Most of their frenzy was focused on Facebook’s promotion, in its “Trending News” section, of a Daily Star article that was about our Europhysics article. Next there was the smear job by the Guardian’s Alan Yuhas, who did his best to discredit and minimize us while holding up the Hearst-owned, pop-science magazine Popular Mechanics as a beacon of truth.

Then came the “Fact Check” by Snopes.com, a self-appointed elder in the church of demolition denial. Much of the Snopes piece is devoted to clarifying that Europhysics News was not the European Scientific Journal and was not a peer-reviewed journal. Never mind the fact that Jones, Korol, and Szamboti have all published papers about the WTC failures in mainstream, peer-reviewed publications and were simply asked to summarize their research findings for this article. (Snopes also misidentifies the magazine’s owner, the European Physical Society, as the “European Physics Agency” — poor form for a “fact-checking” site.)

As its only commentary on the actual substance of our article, Snopes lists five so-called “discredited claims” that we supposedly “relied heavily on”:

The first claim — “Jet fuel cannot melt steel beams” (which is not something we actually said, but is true) — Snopes calls “misleading” because “steel beams do not need to melt completely to be compromised structurally.” Like the blacksmith whose video went viral in 2015, Snopes either deliberately ignores or is oblivious to the widely-known fact that molten metal was seen pouring out of the South Tower and was found in the debris of all three buildings. The actual presence of molten metal is the reason that informed people point out that jet fuel fires cannot melt steel; we are not saying that melting is required for structural members to lose strength. (In fact, we wrote that in order for the steel in WTC 7 to fail, it would need to reach about 660°C, far below its melting point of around 1,510°C.)

The second and third “discredited claims” are actually the author’s misconstrued version of the simple point that, historically speaking, the presence of sprinkler systems and fireproofing have helped prevent steel-framed high-rises from having ever collapsed as a result of fire. Putting aside questions about the exact condition of these systems in the Twin Towers after the airplane impacts and in Building 7 after it was struck by debris from the North Tower, we did not include these two factors as reasons why the buildings should not have collapsed. In fact, far more significant are two other factors we cited: “Fires typically are not hot enough and do not last long enough in any single area to generate enough energy to heat the large structural members to the point where they fail” and “Steel-framed high-rises are designed to be highly redundant structural systems. Thus, if a localized failure occurs, it does not result in a disproportionate collapse of the entire structure.”

The fourth “discredited claim” is that “[p]uffs of smoke exploding from below the collapsing towers suggests controlled demolition.” Simply put, this claim has not been discredited. The National Institute of Standards and Technology (NIST) superficially addressed this issue with two short paragraphs in its FAQs, which Snopes links to. A far more in-depth analysis of this phenomenon is provided by 9/11 researcher Kevin Ryan. Naturally, the Snopes fact checker did not link to this article and in all likelihood has not read it.

The fifth and final “discredited claim” is this: “The buildings fell at a rate possible only by a controlled demolition.” Snopes’ counter-argument is this: “Numerous engineers and scientists have argued that the rate at which the buildings fell is consistent with the manner in which the towers failed, and that the exact time of total collapse is hard to pin down reliably in the first place.”

Once again, Snopes links to NIST’s FAQs, which is almost laughable because NIST infamously ended its analysis at the point of collapse initiation (and even admitted doing so). In other words, NIST never explained the rate of collapse nor did it explain how total collapse could ensue once the upper sections of the towers lost support. That debate is now playing out through the writings of Zdeněk Bažant and Jia-Liang Le on one side and Tony Szamboti, Robert Korol, and other researchers on the opposing side.

Furthermore, establishing the exact time it took for the towers to completely collapse is not actually necessary. We have very reliable measurements of the downward acceleration of the North Tower’s upper section over the first few seconds, and these measurements provide enough evidence to conclude that a force other than the kinetic energy of the falling upper section was destroying the structure below.

In the wake of all this controversy, the editors of Europhysics News decided to invite NIST and Bažant — the two main proponents of the fire-induced collapse theory and the subjects of our criticism — to respond to our article.

As expected, NIST provided a short, boilerplate response that failed to address any of the scientific arguments made in our article. Bažant and Le took the opposite approach, burying readers in formulas and terminology that undoubtedly very few understood.

The editors also invited readers to submit letters. Much to our delight, a former NIST employee named Peter Michael Ketcham wrote a letter condemning the NIST reports. His letter was published in the issue after ours, along with NIST’s boilerplate statement.

Then, in the January/February 2017 issue, Le and Bažant’s article was published. Unfortunately, at that point, the open discussion that the editors had said they hoped to create came to an end. Korol and Szamboti submitted a letter pointing out a number of errors in the Le/Bažant article that were characteristic of Bažant’s work on the WTC failures. But the editors declined to publish this letter on the grounds that they had already presented the subject fairly and that differences on technical points could be substantiated in other scientific journals.

A year and a half later, we are publishing the Korol/Szamboti letter to the editor here at AE911Truth.org. While this probably marks the end of the Europhysics News chapter in the world’s quest to understand what happened on 9/11, I have a feeling the debate on the WTC failures is just beginning to heat up.

Jia-Liang Le and Zdeněk Bažant begin their article in EPN 48/1 by claiming that “lay critics” have questioned the cause of the collapse of the World Trade Center “without any meaningful calculations.” As coauthors of “15 years later: On the physics of high-rise building collapses” (EPN 47/4), the article to which they were responding, we must object to that label and point out the fatal errors that are characteristic of their body of work on the WTC failures.

To claim that we are “lay critics” is insulting and unprofessional. Dr. Robert Korol is a professor emeritus of civil engineering at McMaster University in Hamilton, Ontario, and a fellow of the Canadian Society for Civil Engineering and of the Engineering Institute of Canada. Anthony Szamboti is a mechanical design engineer with 25 years of structural design experience in the aerospace and communications industries. We have each published articles in respected journals critiquing these authors’ analysis of the WTC failures.

The errors in the present article are so numerous that we cannot cover all of them in this letter, but we will highlight the most important ones:

a. Free-fall acceleration during the fall of the first story, instead of the actual, measured 0.5 g acceleration. The latter gives a velocity at impact equal to about 75% of the velocity caused by free fall and thus reduces the authors’ estimated kinetic energy by about 50% (due to the squaring of velocity in the kinetic energy equation).

b. Maximum allowable service load of 58 Mkg for the falling upper section, instead of the actual service load of 33 Mkg. The latter further reduces the estimated kinetic energy to about 28% of what the authors predicted.

c. Column energy absorption capacity, as estimated by the authors, at least 3 times less than it actually was.

a. They do not mention that only a relatively small number of perimeter columns were actually damaged (approximately 15% of the 236 in each of the Twin Towers).

b. They do not mention the 47 extremely heavy columns in the 135 ft.-long x 85 ft.-wide central core structures, which were some 60 feet away from the impact surface.

c. They do not mention that the alleged initiating failure of WTC 1 supposedly occurred on the opposite side of the building from the impact.

d. And they do not mention that the horizontal propagation of the collapse of WTC 1 occurred across the entire building in less than one second.

The above points provide some insight as to why the simple explanation given by Le and Bažant is inaccurate and thus non-explanatory, and why additional investigation into these collapses is needed.