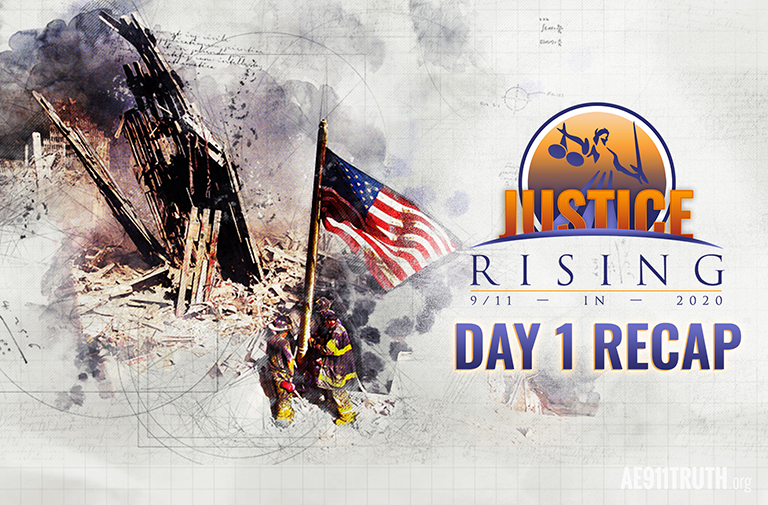 The first day of the “Justice Rising: 9/11 in 2020” conference, dubbed “Justice Friday,” was marked by fascinating information and encouraging signs for the 9/11 Truth Movement. After an introduction to the conference by AE911Truth founder Richard Gage, AIA, which included a video history of the organization, the Friday session turned to what has recently been the hottest 9/11 Truth topic: use of the legal system to expose official lies about 9/11.

In “A UK Family Fights for Truth,” we heard from Matt Campbell, whose brother Geoff was killed in the North Tower of the World Trade Center on 9/11. Matt explained his ongoing fight to reopen the inquest into his brother’s death, which is now more possible than ever thanks to crucial fundraising help from AE911Truth. On the final day of the conference, Matt and AE911Truth finished raising the $100,000 needed to get the case going. Once the inquest is reopened, we will see, for the first time, powerful evidence presented in a courtroom that the three World Trade Center towers were destroyed in controlled demolitions. This will be a huge breakthrough for the 9/11 Truth Movement.

In the next presentation, “Closing in on NIST,” conference viewers were given a detailed review of the Request for Correction submitted earlier this year to the National Institute of Standards and Technology (NIST) regarding its 2008 report on the destruction of World Trade Center Building 7. Ted Walter and Tony Szamboti of AE911Truth and Mick Harrison of the Lawyers’ Committee for 9/11 Inquiry (LC911) outlined the demands being made on NIST under the Data Quality Act to correct the fraudulent claims in its report.

The evening concluded with “The Expanding Legal Front,” an intriguing presentation by Harrison and two other key members of LC911 — David Meiswinkle and Barbara Honegger — about the group’s plans. They focused on LC911’s latest initiative, a petition calling on Congress to reinvestigate the 2001 anthrax attacks. The attacks are believed by many to be a critical but often overlooked element of the 9/11 operation.

Meiswinkle explained that the anthrax petition is the first step in a five-step plan for LC911. He added that the organization’s anthrax committee, which has been meeting for six months, includes Honegger and Graeme MacQueen, the author of The 2001 Anthrax Deception: The Case for a Domestic Conspiracy, along with four attorneys.

A grand jury was convened to examine the anthrax attacks but this was closed down upon the alleged suicide of supposed suspect Bruce Ivins in 2008. According to Honegger, not only did Ivins not carry out the anthrax attacks but he could not have. LC911 recently interviewed Richard Lambert, who headed the FBI’s “Amerithrax” investigation. Lambert left the post when he realized he was being undermined and that there was no basis for suspecting Ivins.

Honegger described the anthrax attacks as one of 9/11 Truth’s “Holy Grails” — which she defined as “burning facts” that could, standing alone, “prove that the official conspiracy theory of 9/11 is both an immense lie and a psychological operation.”