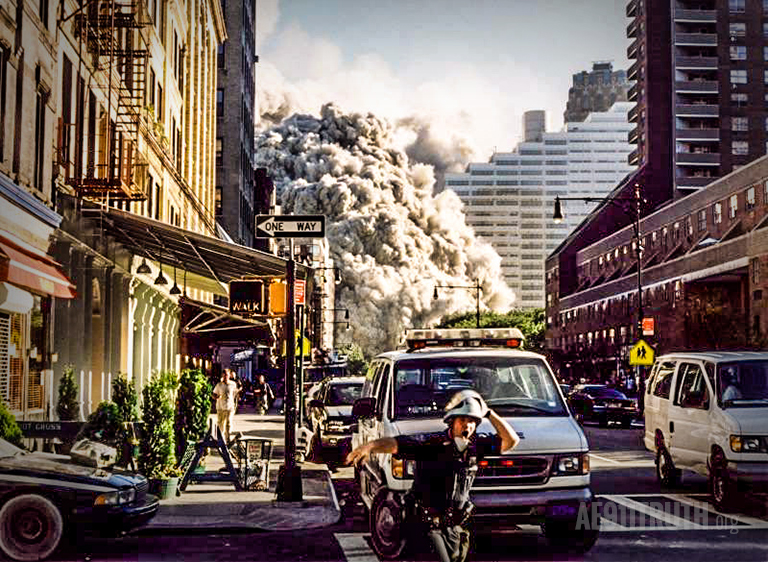 The National Institute of Standards and Technology (NIST) claimed in its final report on the collapse of World Trade Center Building 7 that “there were no witness reports” of an explosion when the 47-story skyscraper fell straight into its footprint late in the afternoon of September 11, 2001.

That claim, long discredited by eyewitness reports of a shockwave ripping through the building and multiple explosions going off, was further challenged in a new filing made today by 9/11 families and Architects & Engineers for 9/11 Truth. The letter, sent to NIST as part of an ongoing effort to have the federal agency overhaul its report, provides the accounts of four reporters who were close to the scene as Building 7 went down.

Most notably, NY1 reporter Gigi Stone Woods, reporting at 6:30 PM, described a “loud, incredibly loud explosion.” A second NY1 reporter, Annika Pergament, reporting at 5:30 PM, said, “You could feel the ground rumble.” WABC’s Jeff Rossen recounted hearing a “tremble” from six blocks away. And Daily News reporter Peter DeMarco wrote, “[T]here was a rumble. The building’s top row of windows popped out. Then all the windows on the thirty-ninth floor popped out. Then the thirty-eighth floor. Pop! Pop! Pop! was all you heard until the building sunk into a rising cloud of gray.”

NY1 reporter Annika Pergament at 5:30 PM: “I mean, it was a rumble. You could feel the ground rumble.”

NY1 reporter Gigi Stone Woods at 6:30 PM: “All of a sudden, a loud, incredibly loud explosion.”

WABC reporter Jeff Rossen: “But when that building collapsed, you heard another tremble.”

The submission of these four eyewitness accounts is the latest filing in a pending “request for correction,” initiated in April of this year under the Data Quality Act, which asks NIST to reverse its conclusion that fires were the cause of the building’s sudden, total destruction. The original request identifies eight items of information in the NIST report that it argues violate NIST’s information quality standards.

NIST issued an initial denial in August, which AE911Truth denounced as “egregious” and a “mockery of the Data Quality Act.” Then, on September 28, 2020, AE911Truth and its fellow requesters filed an appeal, which is now under review by Dr. James K. Olthoff, NIST’s associate director for laboratory programs.

After the non-binding 60-day deadline for Dr. Olthoff to respond to the appeal came and went, AE911Truth and its fellow requesters moved to submit the additional eyewitness evidence, which had been brought to their attention only after they filed the appeal in September.

The collapse of Building 7 at 5:20 PM on 9/11: The east penthouse falls first. The structure then instantaneously goes into free fall.

In addition to the eyewitness accounts of the four reporters, the new filing includes the oral history of Lieutenant Brian Becker of the New York Fire Department.

Becker’s oral history is intended to bolster the claim made in the original request that two men who were attempting to evacuate Building 7 earlier in the day — Michael Hess, the New York City corporation counsel, and Barry Jennings, deputy director of the Emergency Services Department for the New York City Housing Authority — witnessed an explosion that trapped them in the building.

Hess and Jennings each appeared on television later that day describing what they had witnessed as an explosion, and Jennings continued to maintain — until his death in 2008 — that he witnessed multiple explosions while attempting to evacuate Building 7, including the initial one that caused the 6th floor landing he was standing on to give way.

NIST’s explanation that the event Hess and Jennings witnessed was not an explosion, but was damage caused by debris from the collapse of the North Tower, relies on the agency’s untenable claim that it took the two men from 9:59 AM until 10:28 AM to make it from the 23rd floor to the 6th floor — which would mean an average of one minute and 42 seconds to descend a single floor. The request argues that since Hess and Jennings must have reached the 6th floor much earlier than 10:28 AM, the event they witnessed could not have been caused by the collapse of the North Tower at 10:28 AM.

NIST: “As [Hess and Jennings] went to get into an elevator to go downstairs, the lights inside WTC 7 flickered as WTC 2 collapsed [at 9:59 AM]. At that point, the elevator they were attempting to catch no longer worked, so they started down the staircase. When they got to the 6th floor, WTC 1 collapsed [at 10:28 AM] . . . and the staircase filled with smoke and debris.”

The oral history of FDNY Lieutenant Brian Becker demonstrates that he and his team were easily able to descend 30 floors in the North Tower after the collapse of the South Tower at 9:59 AM, even while “checking floors intermittently on the way down.” Becker’s account thus proves beyond any doubt the implausibility of NIST’s claim that it took Hess and Jennings 29 minutes go from the 23rd floor to the 6th floor of Building 7.

The new filing asks Dr. Olthoff to include the additional evidence in the revisions that NIST has been requested to make to its report, since it is directly relevant to the claims already made in the original request.

AE911Truth and its fellow requesters are now awaiting Dr. Olthoff’s final decision, hoping he will direct the responsible NIST personnel to develop a new “Probable Collapse Sequence” that is consistent with evidence of explosions. Should Dr. Olthoff decline to order the requested revisions, AE911Truth plans to file suit against NIST for noncompliance with the Data Quality Act.

Note: This article was updated on January 8, 2021, to reflect that the NY1 reporter who at 6:30 PM described a “loud, incredibly loud explosion” was Gigi Stone Woods and not Annika Pergament. Given the poor video quality, AE911Truth’s best guess at the time of submitting the supplemental letter was that Annika Pergament was the reporter featured in the 6:30 PM clip. However, Ms. Woods has personally confirmed via email that she was the reporter in the 6:30 PM clip. AE911Truth has informed NIST of the correction and has urged NIST to try to interview Ms. Woods, per the correction requested in Section G of the Request. In addition, AE911Truth has added a footnote to the supplemental letter informing readers of the correction. Also, on page 5 of the originally published supplemental letter, Church St. was incorrectly written as Chambers St. It now reads Church St.