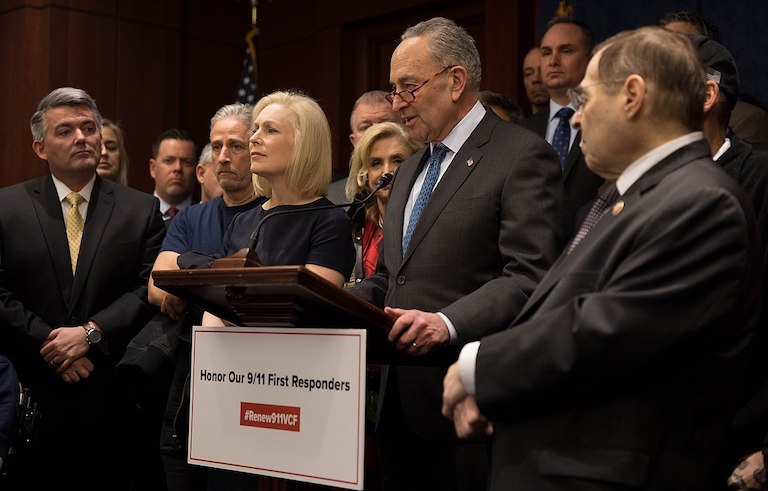 Thanks to the supporters of Architects & Engineers for 9/11 Truth, hundreds of U.S. senators and representatives have received or will soon receive copies of the new documentary SEVEN along with letters urging them to hold the National Institute of Standards and Technology accountable for its unscientific investigation of the World Trade Center destruction.

When all is said and done, more than 300 activists will have sent the DVDs to 90 senators and 209 representatives. Senators in the most populous states will see a deluge of packages, with senators Alex Padilla and Dianne Feinstein of California receiving 50 DVDs each and senators Chuck Schumer and Kirsten Gillibrand of New York — the state most affected by 9/11 — each receiving 18 DVDs. AE911Truth will also send DVDs directly to every member of Congress who didn’t receive one from a constituent. 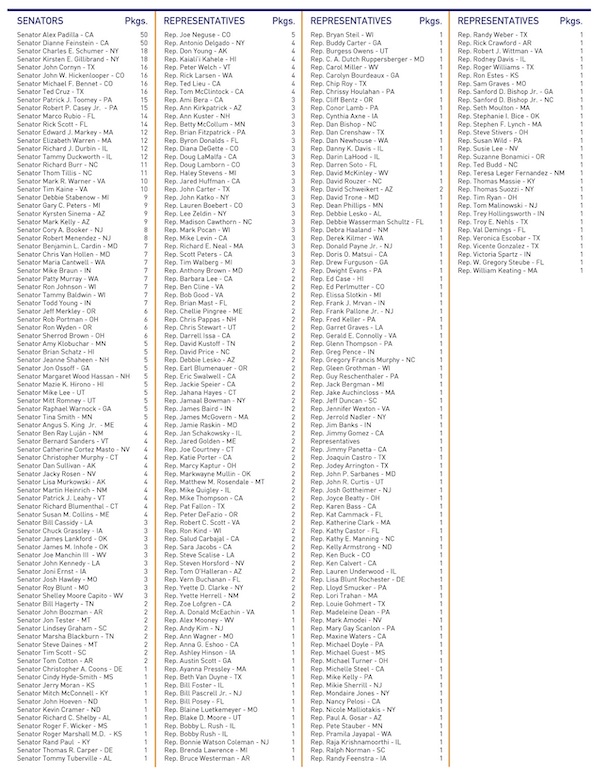 Click to see the members of Congress who are receiving packages from constituents.

AE911Truth operations manager Andy Steele says he’s pleased that so many supporters have risen to this challenge. He says ongoing congressional outreach is important because there are always new members being elected who need to be exposed to the evidence that the three World Trade Center towers were destroyed in controlled demolitions.

“Because of all our public education, we’re constantly reaching new minds, and who knows which of those will be open,” Steele says.

“If we’re going to have an acknowledgement of what really happened to those buildings on that day, it will have to come through an official body like the Congress. It’s also important to let the historical record show that our legislators were not ignorant of this glaring smoking gun that 9/11 was not what we were told it was.”

Architect Bill Brinnier, a long-time AE911Truth supporter who lives about 90 miles north of New York City, sent DVDs to Schumer and Gillibrand as well as to his U.S. representative, Antonio Delgado. Brinnier has participated in past AE911Truth congressional outreach efforts, including on the 9/11 anniversary in 2018, when AE911Truth supporters hand-delivered informational packages to every member of Congress.

He has high praise for SEVEN and thinks the film is very much worth getting into the hands of elected officials.

“I love the movie,” he says. “It was beautifully done. And professor [Leroy] Hulsey did a great job of showing that the destruction of Building 7 couldn’t possibly have been because of fire.”

Brinnier lost his best friend and colleague, Frank DeMartini, who was the World Trade Center construction manager, in the North Tower’s destruction. DeMartini famously commented in early 2001 that the Twin Towers could sustain multiple impacts from jetliners and not collapse. DeMartini and some of his colleagues died because, rather than simply saving themselves, they stayed in the building to rescue others. Brinnier dedicated to DeMartini the letters he wrote to his three elected officials.

“He’s the driving force for me,” Brinnier says. “He’s the reason I push as hard as I do. I’m not going to back down. We’re up against a really nasty group of ruthless bastards.” 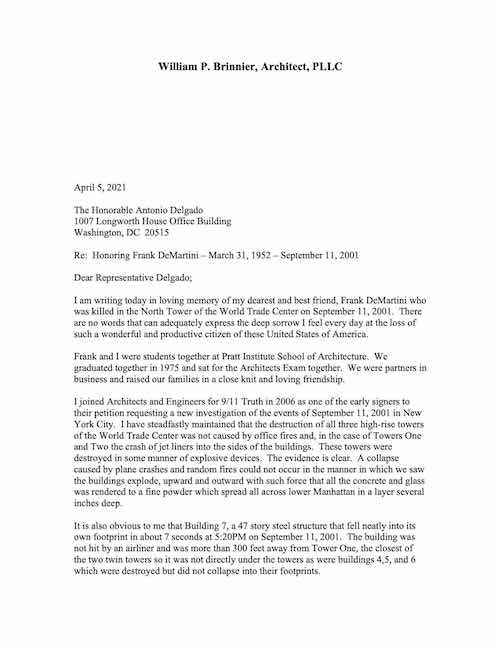 David Mack, who studied architecture at Notre Dame University and who works in construction management in Florida, sent copies of SEVEN to his two senators, Marco Rubio and Rick Scott, as well as to his representative, Val Demings.

Mack says he became suspicious of the destruction of the WTC towers when he saw it on TV that day. He points out that the Twin Towers were incredibly strong structures and that a gravitational collapse could not have pulverized the concrete in the structure to the extent that we saw.

“I thought, ‘Something about this is really fishy.’ The buildings looked like they just disintegrated.”

Retired Vermont structural engineer William Rice, who taught at Vermont Technical College for more than two decades, sent copies of the film to senators Bernie Sanders and Patrick Leahy as well as to his representative, Peter Welch.

Rice says he wrote to Leahy about 9/11 sometime around 2007 but did not get a positive response.

“He very much discouraged me from doing anything with 9/11.”

Despite this, Rice says we have to keep up the pressure on Congress and continue to do all we can to educate elected officials about the evidence.