NIST used numerous unscientific methods and fraudulent inputs to get the key girder to fail in its computer simulation.

For example, NIST arbitrarily added 10% to the temperature results of its fire dynamics simulation (FDS).

“Case A used the temperature data as obtained from the FDS simulation. Case B increased the Case A gas temperatures by 10 percent.” — NCSTAR 1A, page 32 [PDF page 74]

“[O]nly the fire-induced damage produced by Case B temperatures was carried forward as the initial condition for the building collapse analysis.” — NCSTAR 1A, page 36 [PDF page 78]

To get the shear studs on the floor beams to fail, NIST had to assume high steel temperatures. It applied the heat in 1½ seconds over the entire northeast part of Floor 13. This faulty method of calculating temperatures, though, does not allow for the reality of heat dispersal or for the inevitable beam sagging.

Interestingly, NIST's model heated the floor beams but not the concrete slab. Since concrete expands at 85% the rate of steel, leaving this expansion out of the calculations of the shear studs failure is fraudulent.

“The first failures observed were of the shear studs, which were produced by axial expansion of the floor beams, and which began to occur at fairly low beam temperature of 103° C. . . . When the beam temperatures had reached 300° C, all but three shear studs in the model had failed due to axial expansion of the beams, leaving the top flanges of the beams essentially unrestrained laterally.” — NCSTAR 1-9, Vol. 1, page 352 [PDF page 396]

“This analysis demonstrated possible failure mechanisms that were used to develop the leading collapse hypothesis further. The failure modes in this model were incorporated into the 16-story ANSYS and 47-story LS-DYNA analyses.” — NCSTAR 1-9, Vol. 1, page 353 [PDF page 397]

NIST assumed that it took 90 minutes for the fires—which it said were started by burning debris from WTC 1 some 350 feet away—to develop into a 2MW (megawatt) fire.

In NIST's scenario, the damage and the collapse would have occurred at 4:00 p.m.

“The building response is examined at 3.5 h and 4.0 h of heating. At 3.5 h, the floor systems had fire-induced damage and failures of some connections, beams, and girders. After 4.0 h of heating, there was substantially more damage and failures in the WTC 7 structural floor system, particularly in the northeast region surrounding Column 79. The structural condition at these two times illustrates how the structure developed sufficient fire-induced damage to reach the collapse initiation event.” — NCSTAR 1-9, Vol. 2, page 493 [PDF page 155/559]

“Fire-induced thermal expansion of the floor system surrounding Column 79 led to the collapse of Floor 13, which triggered a cascade of floor failures. . . . This left Column 79 with insufficient lateral support, and as a consequence, the column buckled eastward, becoming the initial local failure for collapse initiation.” — NCSTAR 1A, page 22 [PDF page 64] 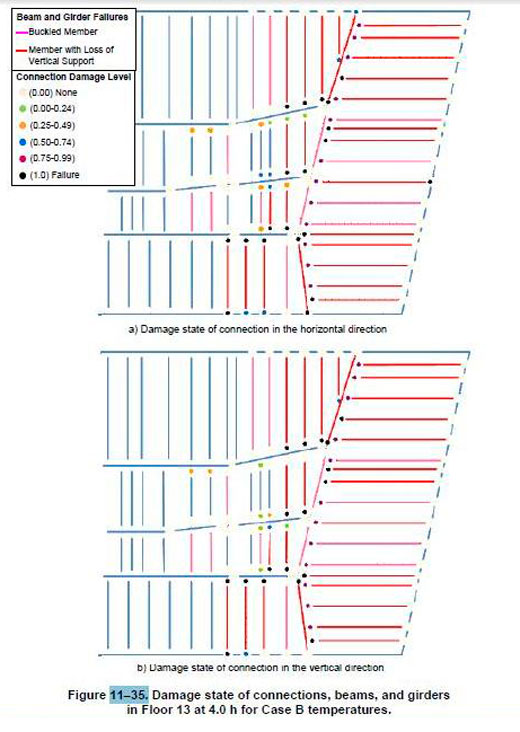 Figure 11-35. Damage state of connections, beams, and girders on Floor 13 at 4.0 h for Case B temperatures.

Table 10-1 shows that the floor beams under floor 13 did not exceed 600° C in the northeast section. 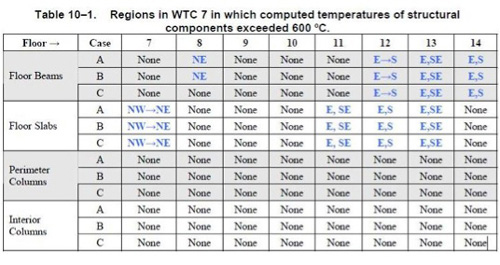 An errata published by NIST in 2012 corrected the “mistake” (about the width of the column seat) that had been made in the final report.

By acknowledging that the seat was in fact 12 inches wide, NIST is admitting that thermal expansion could not have caused the girder to fail; therefore, its hypothesis fails.

Note that the maximum expansion is 5.728 inches at 654° C, because loss due to sagging exceeds elongation due to thermal expansion after that. 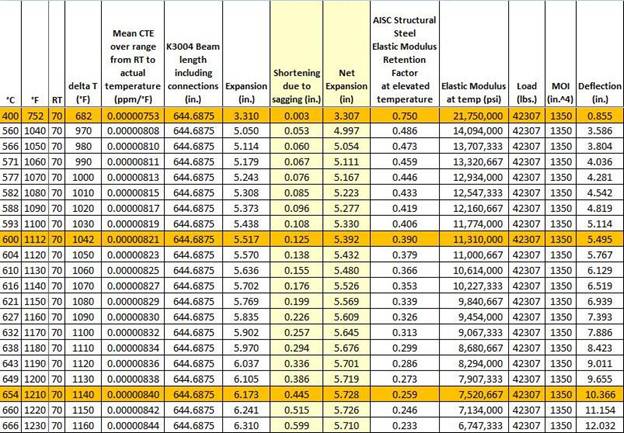 As shown in the graph, structural steel sags as temperature rises, decreasing its length and negating the thermal expansion that NIST blames for the collapse of WTC 7. 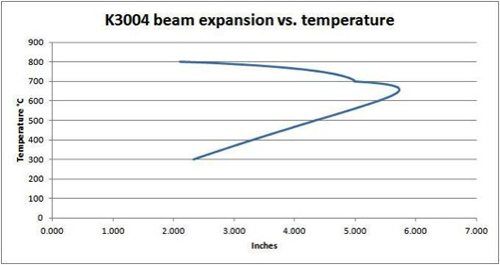 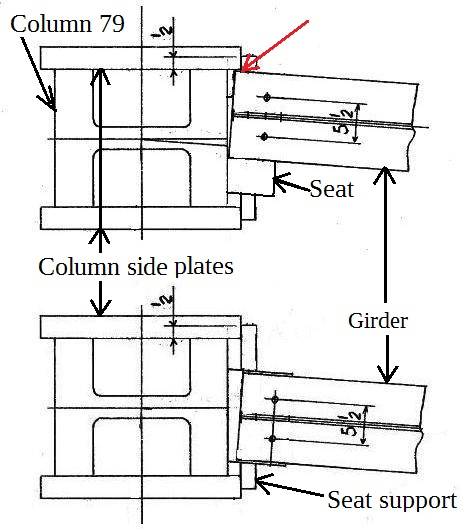 NIST ignored its own finding:

“Temperatures were uniform (within 1° C) across the bottom flange and web, but the top flange temperature was less by up to several hundred degrees because the slab acted as a heat sink.” — NCSTAR 1-9, Vol. 2, page 391 [PDF page 53/457]

Thermal expansion would cause the bottom flange to expand more than the top flange, forcing the beam to bow downward. The NIST hypothesis does not allow for downward bowing.

But NIST said that the critical damage occurred at temperatures below 400° C.

“The initiating local failure that began the probable WTC 7 collapse sequence was the buckling of Column 79. This buckling arose from a process that occurred at temperatures at or below approximately 400° C (750° F).” — NCSTAR 1A, page 21 [PDF page 63]

“Fire-induced thermal expansion of the floor system surrounding Column 79 led to the collapse of Floor 13, which triggered a cascade of floor failures. In this case, the floor beams on the east side of the building expanded enough that they pushed the girder spanning between Columns 79 and 44 to the west on the 13th floor. This movement was enough for the girder to walk off of its support at Column 79.” — NCSTAR 1A, page 22 [PDF page 64]

In the temperature and sag spread sheet above, 400° C would expand the 53-foot floor beams only 3.3 inches.

They can be downloaded here: WTC 7 Blueprints Exposed Via FOIA Request: Building Plans Allow for Deeper Analysis of Skyscraper’s Destruction.

Ron Brookman reviewed the hundreds of drawings through 2011 and then, in February 2012, shared several sheets and the data file with David Cole and his research team. In Frankel drawing #1091, which shows the girder seated connection at Column 79, Cole noticed that the girder seat was 12 inches wide (as noted above), not the 11 inches claimed in the November 2008 final report.  In Frankel #9114 he also noticed the web/flange stiffeners on girder A2001, at the floor 13 Column 79 connection.

NIST was informed of the dimensional discrepancy and their failure to include the stiffeners in their graphic of the girder connection. In June 2012, NIST corrected their report in an errata (see here: https://ws680.nist.gov/publication/get_pdf.cfm?pub_id=901225 ) relative to the seat width, amending lateral and axial failure distances.

In late October 2013, NIST finally admitted that they did not include the stiffeners in their finite element analysis. Their rather puzzling excuse was that since the web did not buckle it was not necessary to include the web stiffeners in the graphic or finite element analysis (even though they would have prevented the bottom flange from folding and thus preventing the girder from failing).

“Walk-off failure of beams and girders was defined to occur when. . . . the beam or girder was pushed laterally until its web was no longer supported by the bearing seat. . . . [T]he beam was assumed to have lost support, as the flexural stiffness of the bottom flange was assumed to be insufficient for transferring the gravity loads.” — NCSTAR 1-9, Vol. 2, page 488 [PDF page 150/554]

The web/flange stiffeners are on the Frankel drawings, but not on the NIST drawings in the final report.

Thanks to the persistence of researcher David Cole, NIST admitted that they omitted the web/flange stiffeners. See: http://911blogger.com/news/2013-11-06/nist-replies-stiffeners-inquiry 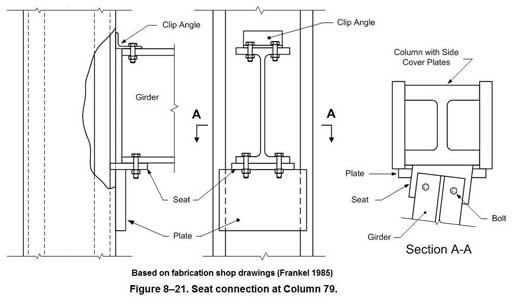 NIST’s drawing of column 79 omits the web/flange stiffeners that would have prevented the girder's failure. 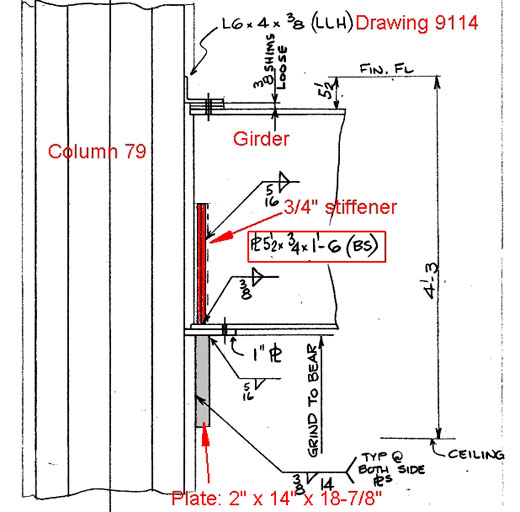 Frankel’s original column drawings (above and below) show the 3/4” web/flange stiffeners in place. 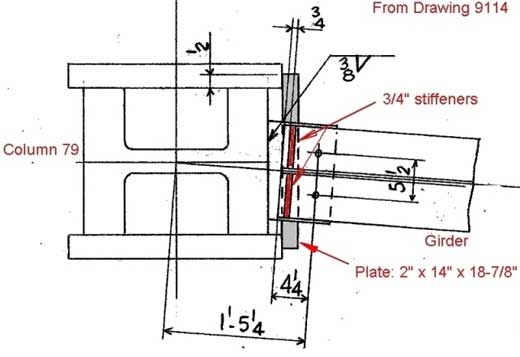