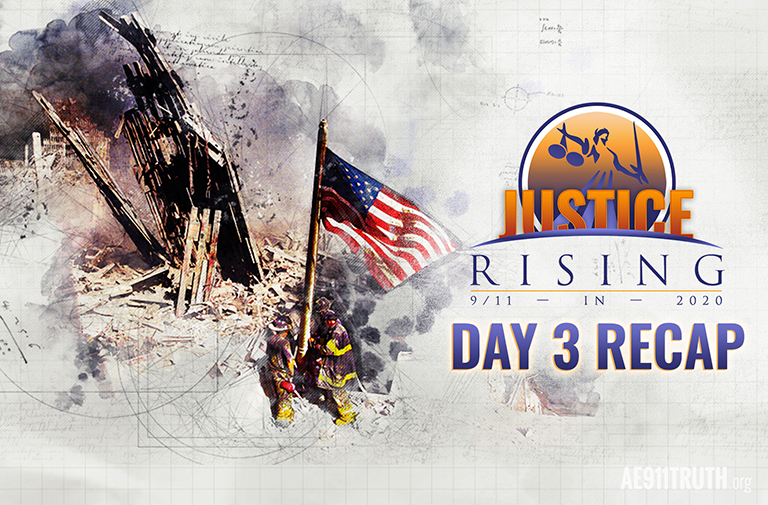 Over the first two days of the Justice Rising conference, we learned about where the 9/11 Truth Movement has been, what it is doing now, and where it is heading. On the third and final day, we heard about how 9/11 and related events fit into the “big picture.”

“Big Picture Sunday” featured three outstanding speakers who outlined different ways that our rights to think and speak as we choose are being steadily taken away.

In “False Flags and Wars of Terror,” Swiss historian Daniele Ganser provided us with an overview of where the “war on terror” has taken the world since 9/11 almost two decades ago. It was obvious, Ganser pointed out, that Afghanistan had not carried out 9/11 and that its people didn’t deserve the war against their country that was launched less than a month after 9/11 and that is still going 19 years later.

“It’s insane that these people are being bombed and killed for something they clearly haven’t done,” Ganser remarked.

He described how the invasion of Iraq in 2003 was likewise carried out under false pretenses — in this case under the guise of searching for weapons of mass destruction. According to Ganser, 85 percent of U.S. soldiers in Iraq in 2006 believed they were there to retaliate for Saddam Hussein’s role in 9/11.

“This is really very, very sad,” Ganser said. “Saddam Hussein clearly had nothing, absolutely nothing, to do with 9/11. But the corporate media just always linked 9/11 and Saddam Hussein. And so these soldiers were really brainwashed and invaded a country they didn’t know; they killed people they didn’t know.”

Iraq is far from the only example of a country being invaded based on a lie, he observed, citing the Gulf of Tonkin incident — a supposed attack by North Vietnam on U.S. naval ships that was later proved never to have actually happened. This lie was used to dramatically expand the United States’ involvement in Vietnam, which ultimately led to the deaths of some three million Vietnamese and 58,000 Americans.

Ganser also talked about “terror” attacks in Europe that turned out not to have been carried out by leftist extremists — as the world was told at the time — but by NATO and the CIA in a decades-long campaign known as Operation Gladio. His book NATO's Secret Armies: Operation GLADIO and Terrorism in Western Europe chronicles the deception.

The second speaker was constitutional lawyer and activist John Whitehead, who outlined how the U.S. is being turned into an increasingly Orwellian police state that punishes dissent and restricts free speech.

He recounted the story of decorated Marine Brandon Raub, a veteran of the Afghan war who was arrested and incarcerated in a psychiatric hospital because of Facebook posts he had made that were critical of President Barack Obama (suggesting he should be in prison) and that opposed the official story of 9/11. It took the filing of a lawsuit by Whitehead's Rutherford Institute on behalf of Raub to get him released.

Whitehead explained that the U.S. government is increasingly considering those who are critical of the government or who challenge official narratives as extremists and even potential terrorists. He added that people need to understand that the “deep state” is really about the merging of corporate and government interests.

Whitehead also described how the country’s police forces are being militarized under the guise of keeping people “secure.” He talked about the “donation” of military equipment to local police forces by the Pentagon based on the claim that the equipment is simply surplus to the government’s needs. The reality, Whitehead explained, is that about half of what has been donated is brand new and was acquired from large corporations for the express purpose of transferring it to police.

Closing the conference was investigative journalist James Corbett, who raised alarms over rapidly intensifying internet censorship that has been silencing alternative and dissenting voices — particularly those challenging the official narrative of 9/11 — in recent years. His talk, “The Library of Alexandria is on Fire: Internet Censorship from 9/11 to Today,” chronicled the way information challenging the truth about events like 9/11 is being purged from the internet or at least made much more difficult to find.

He compared the burning of the great, ancient Egyptian library to the censoring of data from our modern internet. While the true story of the loss of the library may not match what we’ve come to understand (he suggests that it really fell into disrepair rather than being destroyed in a single blaze), the story continues to resonate with us because it encapsulates the idea of the fragility of human knowledge, Corbett said. What we face today, he added, is that, “Those who want to make history disappear can make it disappear by starting a fire.”

For the first few years after 9/11, videos that questioned the official narrative were not hard to find on the internet. In fact, they were often marked by YouTube as “recommended” based on that person’s past viewing history. Had he not happened upon some of those videos in 2006, Corbett admitted, he might never have discovered the holes in the official account. Among the subjects he learned of for the first time was Operation Northwoods, a 1962 plan by the U.S. Joint Chiefs of Staff to carry out terrorist attacks on U.S. soil and fake attacks on American targets that would be blamed on Fidel Castro to justify an invasion of Cuba.

Coming upon this kind of information is more difficult these days as Google algorithms have been manipulated to make facts that challenge the status quo much more difficult to find, while YouTube videos and Facebook posts are taken down by the thousands.

Corbett suggested that alternative voices can be preserved if people back up all their content on hard drives and post that content publicly using alternative platforms.

“They are controlled by the people who want to selectively burn the books.”

His strong advice for all of us: “Save everything. Save all those important documents you’ve come across online — text, video, audio. If you think this is information you would want to know in the future, save it.”

There is so much good information in all three of these “big picture” presentations that we hope you will watch them in their entirety along with all the presentations from Day 1, “Justice Friday,” and Day 2, “Science Saturday.”