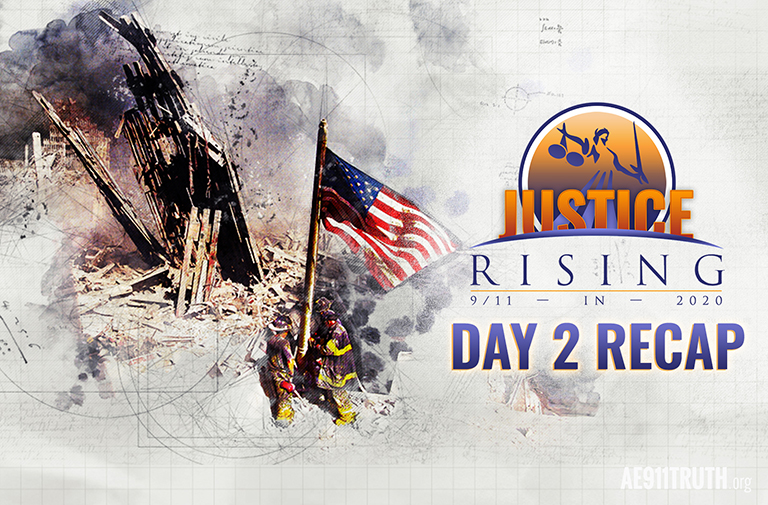 The second day of Justice Rising brought the 9/11 Truth Movement back to its roots in a powerful way.

The day, dubbed “Science Saturday,” began with “Lights, Camera, Building 7,” a panel discussion on the historic documentary SEVEN, which AE911Truth is just weeks away from releasing. On hand to discuss the film were director Dylan Avery, creator of the seminal 9/11 film Loose Change; producer Kelly David, who is the chief operating officer of AE911Truth; and Dr. Leroy Hulsey from the University of Alaska Fairbanks, whose study on World Trade Center Building 7 is the primary focus of SEVEN.

Dr. Hulsey explained how this groundbreaking study came together, while Avery and David shared how the story of the study is told in SEVEN.

The discussion also took us back to how Avery became inspired to work on Loose Change in the early years after 9/11.

“It was a slow process of discovery,” he recounted, “and it all started with the military’s response, or lack thereof, to the attacks themselves, and it just kind of spider-webbed out from there.”

Both Richard Gage, who moderated the discussion, and David had strong praise for the profound impact of that early film.

“Loose Change had an enormous effect in helping to create the 9/11 Truth Movement,” David said. “When I ask the people what it was about the 9/11 evidence that woke them up, more than anything else I always hear, ‘Oh, I watched Loose Change.’ I feel that most of us wouldn’t be here today if it wasn’t for that powerful film that a young aspiring filmmaker made on his laptop.”

This panel was followed by “Global Failure: Evidence Engineers Can No Longer Ignore,” a technical presentation of the findings from Dr. Hulsey’s study, which AE911Truth is now disseminating to tens of thousands of engineers across the U.S. (along, of course, with informing them about the evidence for the controlled demolition of the Twin Towers).

On hand to address this subject were Gage and fellow board member Roland Angle.

Citing Dr. Hulsey’s report, published earlier this year, Angle ended his presentation with this definitive conclusion: Building 7 was a “global failure involving the near simultaneous failure of all columns in the building over eight stories, not a progressive collapse involving the sequential failure of columns throughout the building.”

Notwithstanding the excellence of the first two presentations, the highlight of the day was clearly “Reflections from Three Pioneers of 9/11 Truth Movement,” featuring David Ray Griffin, Niels Harrit, and Steven Jones. While they've continued to contribute to the 9/11 Truth effort in different ways, it has been years since we’ve seen Griffin or Jones speak at a conference. And having the three of them join Gage was unforgettable, particularly for those who were active in the earlier days of the 9/11 Truth Movement.

A visibly emotional Gage described how important each of these three pioneers was to his awakening and how important they continue to be to the hopes for a real breakthrough that will convince the world that the official account of 9/11 is false.

The three speakers told of their history in the movement along with their contributions in the forms of books and papers. Jones mentioned his 2018 book 9-11 Research as a Full Professor of Physics and recounted the story of how he lost his position as a professor at Brigham Young University following his publication of a research paper in 2006.

Jones, ever the professor, also gave “homework” to the audience: He assigned them to read the article he co-authored for Europhysics News, titled “15 Years Later: On the Physics of High-Rise Building Collapses,” which now has more than one million downloads, and the “request for correction” submitted to the National Institute of Standards and Technology earlier this year regarding its 2008 report on Building 7.

Griffin, in reviewing his time as a 9/11 scholar, mentioned three of his 9/11 books as particularly standing out for him, both for their popularity and their strength in covering the evidence: The 9/11 Commission Report: Omissions and Distortions; The New Pearl Harbor Revisited: 9/11, the Cover-Up, and the Exposé; and Debunking 9/11 Debunking: An Answer to Popular Mechanics and Other Defenders of the Official Conspiracy Theory. He later added that The Mysterious Collapse of World Trade Center Building 7 was actually his best book of all.

Harrit focused on the research papers he has authored. He remarked on the clear-cut evidence for the use of nano-thermite in bringing down the Twin Towers and spoke of the ability of nanotechnology to propel the debris from the buildings both upward and outward for hundreds of yards, as was observed.

Using nanotechnology, he explained, allows for the “tuning” of the materials so that they have the properties desired.

“I believe it’s the nano-thermite acting here, not exactly as an explosive, more in between something you would call an explosive or a propellant, because these are one of the virtues or the options of nano-technology . . .,” Harrit said.

Gage brought the conversation around to the subject of American exceptionalism and the unwillingness of Americans to acknowledge deeply troubling truths about their country. Griffin commented that he had been working on a book on that very subject when he turned to 9/11 for the first time to write The New Pearl Harbor: Disturbing Questions About the Bush Administration and 9/11 in 2004. Finally, in 2018, the book he had set earlier aside was published under the title The American Trajectory: Divine or Demonic?

Read our recap of Justice Rising Day 1. And stay tuned for our report on the third and final day of the conference!