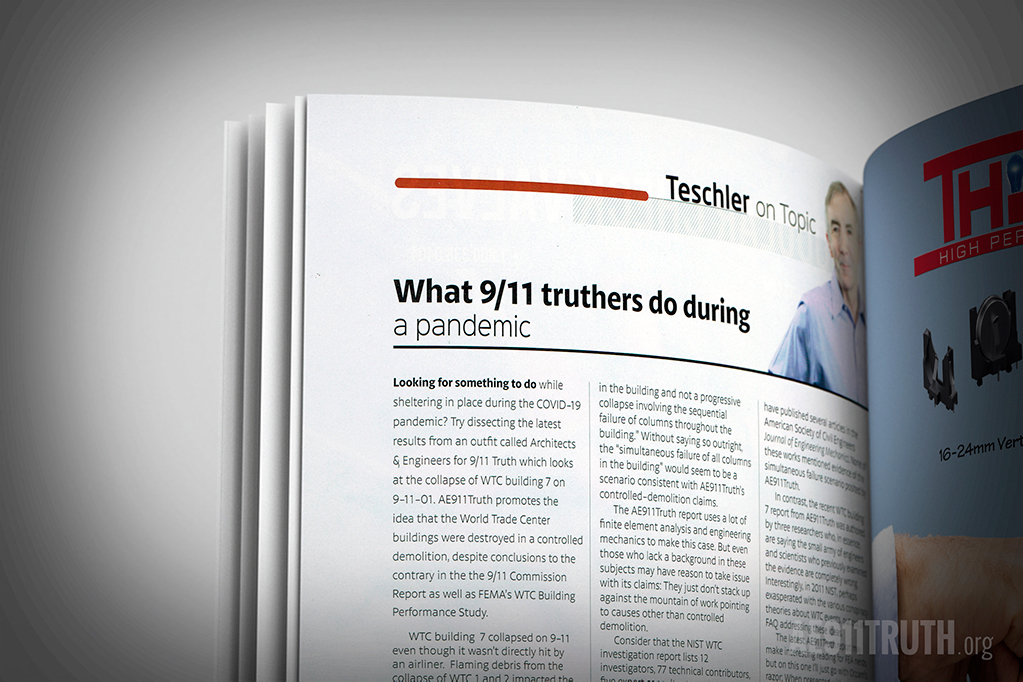 Retired structural engineer Fred Schaejbe, one of the more than 3,500 architects and engineers who have signed AE911Truth’s petition calling for a new investigation into the destruction of the World Trade Center, recently wrote a thoughtful letter to Lee Teschler, the executive editor of Design World, about Teschler’s latest hit piece against AE911Truth.

Schaejbe, who is also a member of AE911Truth’s Project Due Diligence — and in that capacity has given a number of presentations to engineering groups in Wisconsin — agreed for his letter to be published here.

Last year, in response to the release of the University of Alaska Fairbanks (UAF) report on World Trade Center Building 7 by Dr. Leroy Hulsey, Teschler wrote the wildly misleading article “What 9/11 truthers do during a pandemic.” In it, he failed to name the authors of the report or even mention that it was produced at UAF, instead referring to it as an “AE911Truth report.” Schaejbe was not aware of this earlier article when he wrote to Teschler encouraging him to read the UAF report.

Schaejbe hopes that Teschler will respond, but admits he is not holding his breath.

This email is in response to your 10/1/2021 article, “The WTC collapse after two decades,” published in Design World magazine. I respectfully disagree with some of your comments.

I am a retired structural engineer who designed (and performed the detailed structural analysis of) the major structural steel for many large, heavy steel structures installed in hurricane-prone ocean waters for the oil and gas industry. I only mention this personal background in order to provide a perspective for my reply.

With due diligence I read the 9/11 Commission Report but found it way short of explanations for the collapse mechanism and cause of the structural destruction of WTC 1 and WTC 2 when compared to the actual motions of the collapsing buildings as recorded on videos and played in slow motion.

I felt similarly when I read the 9/11 article in a Civil Engineering magazine published in 2002, I think it was, by the American Society of Civil Engineers.

And I had the same perception when I read the reports by the National Institute of Standards and Technology (NIST) on the destruction of the 110-story Twin Towers and the 47-story WTC Building 7. I am not an explosives expert, but as a result of the questionable official explanations of the 9/11 incidents, I researched and became familiar with the magnitudes of the pressures, temperatures, and velocities associated with the detonations of some of the modern high explosives used in controlled demolitions.

Rather than attempting to explain why I believe the use of pre-planted controlled demolition explosives is the only feasible and logical conclusion as to how the Twin Towers and WTC 7 were destroyed, I normally recommend visiting the www.AE911Truth.org website, clicking on “videos” on the menu bar, and selecting and viewing the video entitled 9/11: Explosive Evidence — Experts Speak Out and any of the videos on WTC 7. However, it appears that you may have already done this homework as well as read some of the website’s abundant written information and evidence that support the controlled demolition conclusion.

I would like in particular to draw your attention to the WTC Building 7 report written last year by Professor Leroy Hulsey of the University of Alaska Fairbanks. He and his two PhD engineers performed an exhaustive structural analysis of several potential collapse scenarios. For each scenario, they assumed that various combinations of strategic columns and girders failed. Then they performed a computerized structural analysis to see if the building would completely collapse under any of the scenarios — or if some of its steel frame would remain and have enough reserve strength to stop further collapse. The results of that structural analysis work emphatically disprove the collapse mechanism conclusions given in the official NIST report on Building 7. The Hulsey report concludes that WTC 7’s destruction was not caused by fire, as claimed by NIST, but had to have been initiated by the near-simultaneous failure of every column. Published in March 2020, the final report is available here: A Structural Reevaluation of the Collapse of World Trade Center 7. An extremely well-done documentary about the Hulsey study — SEVEN — can be viewed on the streaming platform of your choice.

There’s no way to know with 100% certainty how and where the explosives were placed in the three buildings. Those details can be learned only in a full investigation conducted by incorruptible, objective, unrelenting examiners who are given subpoena power. However, what we can determine from the physics of the collapses and from the extreme heat observed in the collapsed debris — facts that cannot be negated by such unknowns as the exact placement of the cutter charges — is that explosives (and incendiaries) had to have been used and that the destruction of the three skyscrapers was not a case of progressive collapse. An impartial investigation will reveal all the “how” and “who” and even “why” answers.

You mentioned the disparity between the total number of architects and engineers in the United States versus the number of AEs who have signed our petition. The main reason so relatively few are signatories is that all the theories and evidence except the official narrative have been heavily suppressed by the government and the professional associations — to the detriment of the truth being revealed.

You also mentioned that many of the petition signers are not civil engineers but are from other engineering disciplines and might benefit from auditing a structural steel design course. I believe that the evidence of controlled demolitions is so obvious and compelling when anyone views the slow-motion videoed collapse of the three WTC buildings and considers the massive amount of heat and melted steel in the debris piles that a small amount of both common sense and intelligence are all that are required to understand and support the controlled demolition scenario. In other words, one need not necessarily have a civil engineering or a structural engineering degree to discern the truth. That said, several of the signatories do indeed have such credentials, along with extensive structural engineering experience.

Whether to believe the aforementioned official explanations of the collapses or to believe the pre-planted controlled demolition theory is a classic example of how we must often make “decisions under uncertainty” (a term oil-and-gas drillers in my industry are well-acquainted with!). In other words, each individual is faced with the same dilemmas: limited time and money for in-depth research; limited personal experience; human tendencies toward ignorance or arrogance, rebellion or obedience, and positivity or negativity; conflicting belief systems; multiple responsibilities; global divisiveness, chaos, and confusion; and other competing complexities of life.

Thus, I maintain that, when faced with life-altering decisions, the best any of us can hope to do is to choose the answer that most closely conforms to the absolute laws of truth and of life found in all ancient scriptures and (“and,” not “or”) the answer that is most beneficial to all mankind.

Although I disagree with your position on 9/11, I respect your right to believe the official narrative. However, I am disappointed by your decision to throw mud at the 3,500-and-counting engineers and architects who support the controlled demolition conclusion presented by AE911Truth. In the future, I hope your comments about fellow professionals who have beliefs about 9/11 different from yours will be more respectful. I also hope that my thoughts will be meaningful and helpful to you.