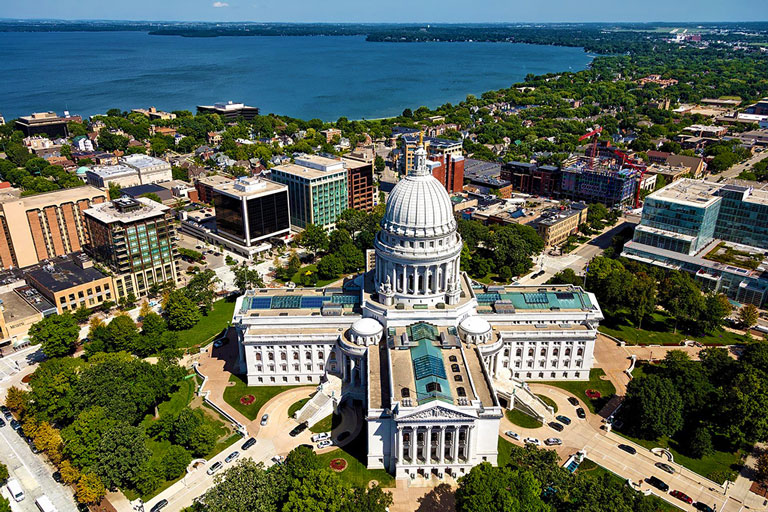 At the April 30 conference in Waukesha, Wisconsin, engineers Dan May and Fred Schaejbe gave the PDD presentation, “A Critique of the NIST WTC Building Failure Reports and the Progressive Collapse Theory,” to an audience of 46 fellow engineers. In his report to AE911Truth, May wrote that those who attended the talk appeared to find the information compelling.

“After presenting the NIST theory on WTC 7 and the conflicting data, we asked if anybody was still comfortable with the NIST explanation of the failure. Nobody raised their hand.”

Likewise, in an interview for this article, Schaejbe pointed to the effectiveness of highlighting Building 7 in reaching this expert audience.

“We intentionally concentrate on that,” he said. “That’s the linchpin. A lot of people are not aware that a third building came down that afternoon. That has potential to open some eyes, because it’s obviously a controlled demolition.”

What made this opportunity to present at the WSPE’s annual conference especially noteworthy is that the invitation came from the organization’s leadership.

Schaejbe explains that he had initially approached the WSPE’s vice-president for governmental affairs, Glen Schwalbach, in January about the possibility of making a presentation to one of the local WSPE chapters. May and Schaejbe were given that opportunity in March, when they spoke to a combined monthly meeting of the WSPE and the American Society of Civil Engineers (ASCE) in Green Bay, Wisconsin. In addition to the licensed engineers from the two societies, there was a contingent of students from a local technical school in attendance.

Schwalbach estimated in an interview that the monthly meeting is usually attended by about 12 engineers, but this one attracted upwards of 40. According to Schwalbach, a 40-minute video of the PDD presentation on Building 7 was shown first, and this had enough of an impact on the audience that they were willing to extend the meeting so they could watch the second part of the video, also about 40 minutes long, on the destruction of the Twin Towers.

“Everyone was interested in staying, so Dan and Fred went ahead and showed the second video,” Schwalbach said.

He explained that he found the PDD talk in March to be extremely credible, and, on the basis of this, he invited May and Schaejbe to present at the annual conference.

“He was very enthused about having us come up and present,” Schaejbe said. “We were sure happy to hear that.”

Schwalbach said that when he was first approached by Schaejbe, he wanted to be sure that PDD wouldn’t just be pushing a “conspiracy theory.” But after seeing the material presented at the local event, Schwalbach said he was impressed and could see that the information was serious and scientific.

“They are letting viewers make up their own minds,” he said. “They are not advocating a theory.”

Schwalbach, who introduced the two engineers at the Discovery Conference, added that the session was very popular with attendees. He said that when the meeting split into three “breakout” sessions in the afternoon, nearly half of the approximately 100 in attendance chose the PDD session. And not one person raised an objection to the material, either during or after the presentation.

“People found it very enlightening and thought-provoking,” Schwalbach said, “including members of our executive committee.”

As a result of the presentation, Schwalbach has been left with his own questions about the official explanation for the WTC destruction — questions that were not answered by the official reports. Among his concerns are the molten metal reported to have been found under the towers and the NIST model of Building 7’s failure.

“I’m reluctant to say there was a cover-up, because I don’t know what these people had in front of them,” he said, referring to the NIST investigators. “But the model they had just predicted this up to a point, and then they just quit modeling the rest of the collapse. It doesn’t explain Building 7. It’s obvious that something weird went on there.”

Schaejbe recounted that on the way into the conference, he and May met an electrical engineer who had quit the Institute of Electrical and Electronics Engineers (IEEE) because of that organization’s failure to challenge the official reports. He said he was very pleased that PDD would be making a presentation at the conference.

“Those attending have engineering training and they know that something’s fishy with it — that something’s wrong with the official government and mainstream media explanation,” Schaejbe said.

The enthusiastic response from engineers at WSPE bodes very well for PDD’s strategy of working from the bottom up until support for a new investigation within the profession becomes unstoppable.