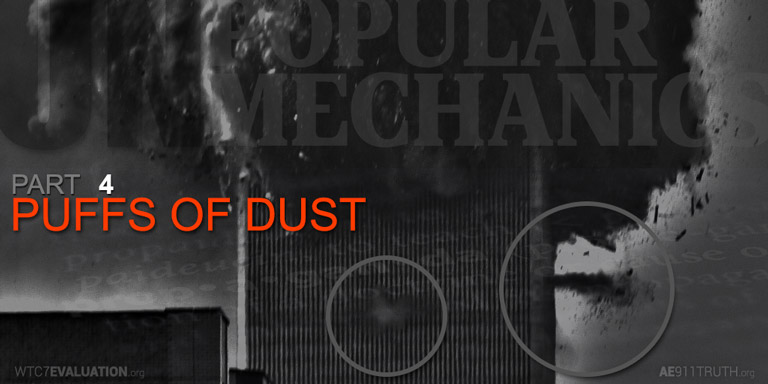 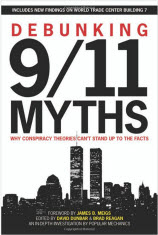 PM's case against the ejections begins with a discussion of how the Towers were designed. As noted by PM, “Like the vast majority of office buildings, the Twin Towers were mostly air” (pg. 48). PM intended this assertion to support the idea that the ejections were caused by built-up air pressure. Although it is true that the Towers, like most buildings, were mostly air by volume, the air was not pressurized, as noted by Kevin Ryan:

[T]he floors were not air-tight, enclosed containers either, which means that, even if the falling mass could exert a uniform downward pressure, it would not be contained.1

In other words, the Towers were not like fully inflated balloons, ready to burst the moment one of their windows was punctured.

PM also quotes Dr. Shyam Sunder of NIST: “When you have a significant portion of the floor collapsing, it's going to shoot air and concrete dust out the window” (pg. 48).

The problem with this assertion is that the material contained within the squibs is not merely dust, but also pulverized building material. As noted by Dr. Crockett Grabbe:

Note that the debris coming out with the squib on the right is falling, showing that it is made up of particles of matter shooting out, not just smoke (as defenders of the NIST report claimed).2

Indeed, videos and photographs confirm this. 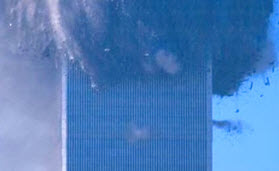 The material being ejected below the collapse front is not merely a “puff of dust” — it is pulverized building debris.PM's entire characterization of these ejections as “puffs of dust” is inaccurate and misleading. The material shooting out clearly is made up of pulverized bits of matter that are solid and not merely just puffs of dust and smoke, as they would like us to believe.

PM then goes on to claim that it is the members of the 9/11 Truth movement who have mischaracterized the collapse of the World Trade Center. PM quotes Dr. Crockett Grabbe as saying, “There is strong evidence for controlled demolition causing the collapses instead of fires from the planes . . . but virtually none of the pancake theory of collapse.” From this PM claims that Dr. Grabbe misstated a crucial point, which is that NIST investigated only what caused the collapse of the towers, not the mechanism of the collapse.

PM also claims that NIST never suggested that the Twin Towers began to collapse due to pancaking floors. Although PM cites Dr. Grabbe's website, SeaLane.org, it does not cite the source within the website, which is an article titled Response to NIST on Controlled Demolition Investigation Failure.3 In this article, Dr. Grabbe criticized NIST for not examining the entire collapse and the possibility of demolition. Whereas PM acts as if NIST's omission was normal, Dr. Grabbe demonstrates there are numerous reasons NIST should have examined the entire collapses, including:

Again, these facts would have become apparent to the reader had PM cited the article instead of just Dr. Grabbe's website.

Conspiracy theorists promptly leveled accusations that the agency had backtracked. “It is gratifying that NIST finally admits their findings do not support the ‘Pancake Theory' of collapse,” wrote Kevin Ryan at http://stj911.org.  “Note that this is in direct contradiction to Shyam Sunder's comments reported by Popular Mechanics Magazine” (pg. 49).

PM then claims that Kevin Ryan “did not read NIST's work carefully” (pg. 49), saying that NIST did report pancaking of floors in NCSTAR 1-3, but not that pancaking initiated the collapse. Again, PM provides no direct source within the website for these quotes (which actually come from an article titled Responses to NIST's FAQ).

Why didn't PM address any of these arguments provided by these experts? Why did PM choose to simply pick what appear to be random quotes that are not discussing the main subject of PM's chapter?

PM omitted any mention of the 3,000+ architects and engineers who have signed on to a petition at AE911Truth demanding a new scientific investigation of the towers' destruction. They are now represented by 43 technical and building professionals who appear in the new documentary film, 9/11: Explosive Evidence — Experts Speak Out, which lays out the incontrovertible evidence for the explosive nature of these high-speed ejections. The speeds of these ejections of pulverized building materials have been calculated at 160 to 200 feet per second.

PM then proceeds to cite the opinions of demolition experts regarding the ejections. One of the people cited is Mark Loizeaux, president of Controlled Demolition, Inc., whom PM quotes as saying that 9/11 Truth experts are wrong about their interpretation of the ejections.

“If you look at any building that is imploded, the explosives are primarily placed on the ground floor and the basement,” Loizeaux said. “Why? Because you want to remove the columns when you have the majority of that stored potential energy above where you're taking the columns out. You want to release as much energy as possible. If you look at the collapse of the structures, they start collapsing up where the planes hit. They don't start collapsing down below.”

Loizeaux said that even if explosives have been placed on the upper floors they would have generated significantly more dust and debris than mere “puffs” (pg. 51).

Loizeaux's argument contains two premises—that (a) demolitions are always started at the bottom of a structure, and that (b) explosives would have created far more dust and debris had they been placed at the top. His first premise is simply wrong, as demolitions can be started anywhere in a structure with the right amount and placement of explosives. And the demolitions of the Towers would need to start near where the planes impacted, as explained by researcher Jim Hoffman:

[A]s part of a psychological operation, the controlled demolition of the Twin Towers would be designed to support a false narrative of events (that the plane crashes caused the collapses), so of course the events were engineered to have the destruction start around the crash zones.4

As for his second point, that the explosives would have produced far more dust and debris than mere puffs, one has to wonder if Loizeaux has even seen any videos or photos of the Towers' collapses.

The destruction of the Twin Towers created massive amounts of debris, which contradicts the claims of Controlled Demolition president Mark Loizeaux.

Despite Loizeaux's claims to the contrary, demolitions can be started anywhere in a building where they may be necessary.5

But PM then proceeds to quote Loizeaux as saying that “the explosives configuration manufacturing technology [to bring down those buildings] does not exist” (pg. 51). According to Loizeaux, the biggest commercially available charges will not cut through steel columns more than three inches thick. However, there are two problems with Loizeaux's argument. First, AE911Truth proposed that the explosives may have actually been used to attack the weld connections of the Tower columns, not the columns themselves. As AE911Truth writes,

Many of the core box columns found in the WTC rubble had concave sides. Most were broken straight across at the weld points. Often, one side of the column's welds [was found to have been] deeply oxidized and even torn away. Explosions ripping across the weld points, as explained by Gordon Ross, offer an explosive hypothesis that demonstrates a mechanism with results resembling observations in the WTC rubble.6

The weld connections would not have required as much explosive force to break them. However, even if the columns were directly attacked by the explosives, we should question how factual Loizeaux's claims are concerning the cutting power of cutter charges. As early as 1997, the Lawrence Livermore Laboratory developed shaped charges that were able to penetrate 3.4 meters [approx. 134 inches] of high-strength armor steel.7 Clearly Loizeaux's claims are contradicted by this fact alone. And of course, one of the primary types of explosives posited as being used to destroy the Towers is nanothermite, another technology Loizeaux claims doesn't exist.8

In PM's next attempt to discredit the 9/11 Truth movement, the writers cite Dr. Zdenek Bažant to rebut claims made by Dr. Steven Jones. Although PM's intention in citing Bažant is to further the theory that the Towers collapsed from natural forces, parts of Bažant's claims actually contradict PM's earlier arguments, as summarized by David Ray Griffin:

Our authors also unwittingly contradict NIST in their discussion of Zdenek Bažant, whom they had asked about a criticism, made by Jones, of a paper Bažant had co-authored with Yong Zhou on why the WTC buildings collapsed. Jones had argued that this paper was fatally flawed by its assumption that the steel columns were exposed to temperatures above 800°C (1,472°F). In his reply, Bazant said: “Today [it] is clear that the temperatures were much lower.” He even suggested that they may have been “less than 400°C.” Bažant went on to claim that this difference was unimportant for his analysis. Be that as it may, it involves a huge contradiction with NIST's analysis (as distinct from its empirical data), according to which steel was exposed to fires of 1,000°C (1,800°F). Bažant's statements — that the fire may have been less than 400°C — also contradicts the impression, which PM tries to create, that some of the steel was heated to up to 980°C (1,800°F). Did PM's right hand not know what its left hand was doing?9

Griffin also addresses the claims that New Mexico Tech professor Van Romero was misquoted about saying the Towers looked as if they were brought down via demolition:

If the PM authors [had] been honest reporters, they would have pointed out that, in the first Albuquerque Journal story written by Olivier Uyttebrouck, Romero was quoted as having said: “My opinion is, based on the videotapes, that after the airplanes hit the World Trade Center there were some explosive devices inside the buildings that caused the towers to collapse.” Also, saying that the collapse of the buildings were “too methodical” to be the chance result of the airplane impacts, Romero added: “It would be difficult for something from the plane to trigger an event like that.” Romero was hardly misquoted.10

PM finishes up this section by claiming that Loizeaux has been accused of being part of the conspiracy to destroy the Towers. However, they provide not a single example of anyone who has actually said this. Certainly no prominent member of the 9/11 Truth movement has made this accusation. This is clearly another attempt on PM's part to play on the emotions of its readers.

Part 5: Nanothermite in the Towers

1 Quoted from: High Velocity Bursts of Debris From Point-Like Sources in the WTC Towers, by Kevin Ryan, pg. 4 http://www.journalof911studies.com/volume/2007/Ryan_HVBD.pdf

2 Quoted from: National Swindle on the World Trade Center, by Dr. Crockett Grabbe

3 That article can be read here: http://www.sealane.org/writings/NISTresp2.html