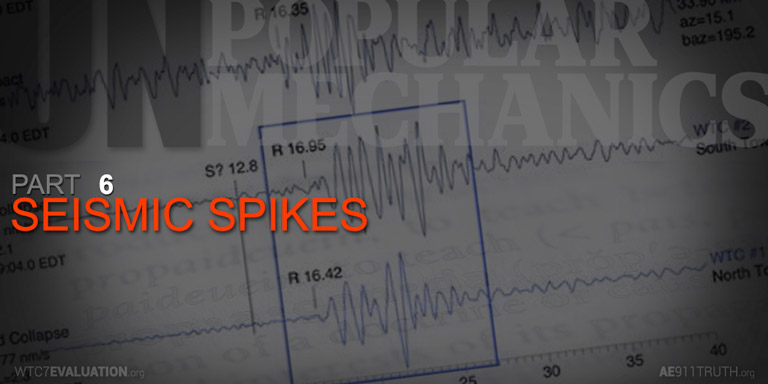 Editor's Note: A month after we published this installment of Adam Taylor's series, Andre Rousseau, an expert in applied geophysics and the author of more than 50 papers on progressive mechanical waves and geology, published an article titled "Were Explosives the Source of the Seismic Signals Emitted from New York on September 11, 2001?” In it, Rousseau concluded that the seismic waves generated during the WTC events clearly point to pre-airplane impact explosions and pre-collapse explosions as the causes of the seismic signals. Rousseau's analysis, along with other analyses by Craig Furlong, Gordon Ross, Dr. Graeme MacQueen, and the 23-member 9/11 Consensus Panel, have led to a general consensus in the 9/11 research community that the seismic data constitute direct evidence — and virtually irrefutable proof — that explosives were used in the destruction of the World Trade Center towers.

Therefore, while Adam Taylor's response to Popular Mechanics in 2012 is not incorrect — indeed, seismic spikes do not always occur in a demolition — the best evidence available today directly refutes the claims of Popular Mechanics regarding the seismic data. For more on this topic, we encourage readers to start with our "FAQ #4: Do the seismic data from the events at the World Trade Center corroborate the eyewitness, video, and forensic evidence of controlled demolition?," which includes links to all of the aforementioned relevant research.

The final section of Popular Mechanics' (PM's) chapter on the Twin Towers addresses a theory that is not widely believed among members of the 9/11 Truth Movement: that large seismic spikes indicative of explosions occurred before the Towers collapsed. As PM explains: 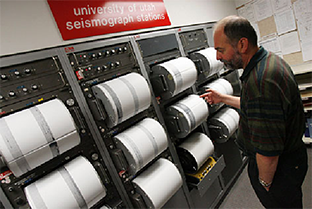 Seismographs pick up readings from large events like earthquakes, but according to seismologists, explosions from a controlled demolition would not register.

On www.whatreallyhappened.com, the Web site references a graph showing the readings over a 30-minute span. Measured over such a long time period, the collapses do appear as sudden, momentary spikes. But when shown on a more detailed graph covering a 40-second span, it is clear there was sustained seismic activity for the duration of the collapses (pg. 62).

PM's assessment corroborates the findings of the Lamont-Boherty Earth Observatory at Columbia University.1 However, the point that there was not just one sudden seismic spike at Ground Zero has been noted by other supporters of the 9/11 Truth Movement as well.2

In refuting a claim made by very few members of the movement, PM also refutes an argument that several other defenders of the official 9/11 story have made: that any explosives used on 9/11 would have been detected by seismographs. As PM writes (quoting seismologist Arthur Lerner-Lam):

“Demolitions are typically very small explosions,” Lerner-Lam says. “And, you wouldn't record them anyway because they'd typically be aboveground, and too small to observe” (pg. 63). 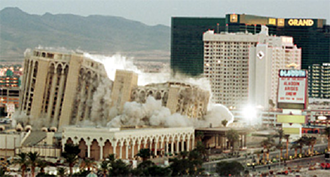 The demolition of the Aladdin Hotel in Las Vegas is an example of an explosive event that did not create a seismic signature.This admission in PM's book is noteworthy, as several “debunkers” have in fact argued that the absence of seismic spikes indicates that the Towers were not demolished with explosives.

9/11 researcher Jim Hoffman has confirmed that seismographs do not always record explosions from demolitions:

[This] assertion contrasts with this description of the Aladdin Hotel demolition:

But with the charges positioned aboveground instead of within the earth. . . . the Aladdin implosion didn't even register on the nearby seismograph at the University of Nevada, Las Vegas, according to geology professor Dave Weide.

Clearly, a demolition's seismic signature, like its other aspects, is a function of its design. Staggering the detonation of hundreds of charges over time would minimize explosives-induced ground vibrations, which would probably be eclipsed in any case by the relief of strain as tens of thousands of tons of the Towers' upper sections were severed from their bases, and by the much larger vibrations caused by rubble hitting the ground.3

Although it is debatable whether or not the seismic readings from 9/11 indicate that explosives were used,4 it is evident that seismic spikes do not always occur in a demolition. Therefore, PM's final chapter on the Twin Towers does not contradict the 9/11 Truth Movement's case for controlled demolition.

4 This article provides analysis that shows the seismic signals may indicate the use of explosives: http://www.journalof911studies.com/volume/2009/MacQueen_EarlyEarthShake.pdf