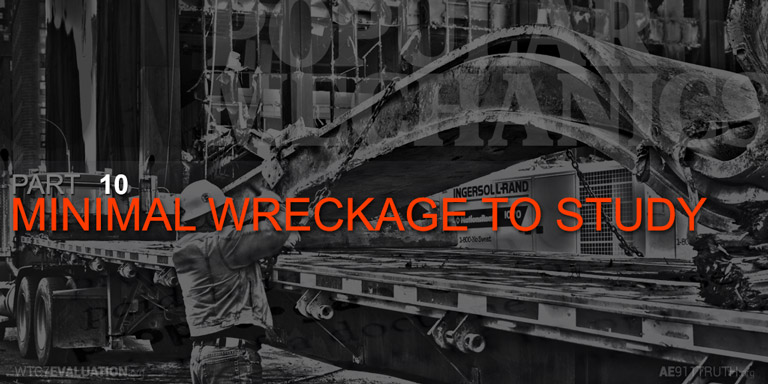 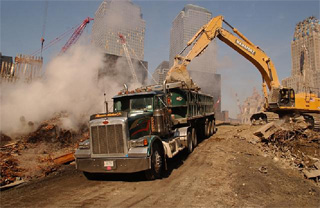 More than 100,000 tons of WTC building debris was removed from Ground Zero in the three weeks following 9/11, making a proper on-site investigation impossible.In the last section of their book covering World Trade Center 7 (WTC 7), Popular Mechanics' (PM's) writers and editors discuss the fact that the steel from Ground Zero was quickly removed from the site and recycled. Not surprisingly, 9/11 researchers have cited this as evidence of a cover-up. However, PM's writers attempt to explain why there was nothing unusual about this speedy cleanup of Ground Zero, and we see that, once again, their excuses are groundless.

“There has been some concern expressed by others that the work of the team has been hampered because debris was removed from the site and has subsequently been processed for recycling,” Gene Corley told the U.S. House Representatives' Committee on Science in March 2002. “This is not the case. The team has had full access to the scrap yards and to the site and has been able to obtain numerous samples. At this point there is no indication that having access to each piece of steel from the World Trade Center would make a significant difference to understanding the performance of the structures” (pg. 86).

Although the FEMA team had some access to the steel and the site, the initial investigation was plagued with problems cited by the Science Committee of the House of Representatives, including:

Moreover, Corley complained to the Science Committee that the Port Authority refused to give his investigators copies of the WTC towers' blueprints until he signed a wavier that the blueprints would not be used in a lawsuit against the agency. Corley also admitted that “the delay in the receipt of the plans did somewhat hinder the team's ability to confirm their understanding of the buildings.”

Contrary to what many believe, the removal of the debris was very rapid, with more than 100,000 tons of it being removed by September 29, 2001. Much of the steel was removed from the site before FEMA had even started its investigation. Although PM apparently sees nothing wrong with how the debris was handled, numerous individuals demanded that the steel be preserved and were upset that the steel was recycled, including professor of fire science Glenn Corbett, fire protection engineer Craig Beyler, and Bill Manning, editor of Fire Engineering magazine, who deemed the investigation a “half-baked farce. . . . [T]he destruction and removal of evidence must stop immediately.”

Because the steel was recycled so quickly, the National Institute of Standards and Technology (NIST) hardly had any steel to examine from the three towers. Much of the steel that NIST did have was left uncatalogued and stored in Hangar 17 at the John F. Kennedy International Airport. NIST used fallacious reasoning to exclude most of this steel from its primary investigation. Rather than acknowledge the absurdity of this, PM instead notes that NIST relied extensively on computer models to investigate WTC 's collapse. The writers also quote New York Mayor Michael Bloomberg (whom they also mention has an engineering degree) as saying, “Just looking at a piece of metal generally doesn't tell you anything” (pg. 87). 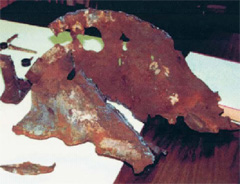 While Popular Mechanics claims that examining WTC steel from Ground Zero is pointless, it ignores the evidence of highly corroded and melted steel that supports the controlled demolition hypothesis.However, examining a piece of metal can actually tell you quite a lot. In fact, one piece of steel from WTC 7 was remarkably informative. Two professors from Worcester Polytechnic Institute found that it had been corroded and melted by a liquid eutectic mixture of “primarily iron, oxygen, and sulfur,” which, interestingly enough, are also the primary components of thermite — an incendiary used in military applications to cut through steel like a hot knife through butter. However, this phenomenon was reported nowhere in NIST's final report on WTC 7, even though NIST was obviously aware of it. PM, likewise, omits this fact, which is odd, considering that its goal was to “disprove the most prominent conspiracy claims.”

The fact that NIST did not examine and document such pieces of steel from WTC 7 casts great doubt on its investigation, as does its own FAQ page: “[We] did not test for the residue of [explosives and thermite] in the steel.” By this omission, NIST has clearly ignored two guidelines in the National Fire Protection Association's Guide For Fire And Explosion Investigations, NFPA 921. First, NFPA Section 18.15 makes it clear that all fuel sources should be analyzed, including explosives:

“All available fuel sources should be considered and eliminated until one fuel can be identified as meeting all of the physical damage criteria. For example, if the epicenter of the explosion is identified as a 6ft (1.8 m) crater of pulverized concrete in the center of the floor, fugitive natural gas can be eliminated as the fuel, and only fuels that can create seated explosions should be considered. Chemical analysis of debris, soot, soil, or air samples can be helpful in identifying the fuel (emphasis added). With explosives or liquid fuels, gas chromatography, mass spectrography, or other chemical tests of properly collected samples may be able to identify their presence.”

Second, Section 9.3.6 states that physical evidence should not be disposed of until absolutely necessary:

“Once evidence has been removed from the scene, it should be maintained and not be destroyed or altered until others who have a reasonable interest in the matter have been notified. Any destructive testing or destructive examination of the evidence that may be necessary should occur only after all reasonably known parties have been notified in advance and given the opportunity to participate in or observe the testing.”

Furthermore, it's hard to imagine that there was any justification to remove the WTC 7 steel as quickly as the Twin Towers' steel, given that no one is said to have died in the building, and therefore no victims were to be rescued or found in the WTC 7 debris.

It is obvious that the disposal of the steel of Ground Zero was completely unjustifiable, and served only to cover up or obscure the possibility that explosives and incendiaries were used to demolish the Towers and WTC 7.

It is apparent that the writers and editors of Popular Mechanics have not sought to learn anything in the past six years since publishing the first edition of their book. When one reads through the updated publication, one immediately finds the same type of dishonest tactics and flimsy arguments found throughout all of their other attacks against the 9/11 Truth Movement. Although the writers would like the public to believe that they are merely acting as “investigative journalists,” their latest piece of propaganda shows that this is not even remotely true. If we are to find out what truly happened to the three WTC high-rises on September 11, 2001, then we must continue to research all available data and not limit ourselves to only what self-proclaimed “debunkers” have to say.

For more information on 9/11, the following sites are recommended:

See: COMMITTEE ON SCIENCE - U.S. HOUSE OF REPRESENTATIVES - HEARING CHARTER - Learning from 9/11: Understanding the Collapse of the World Trade Center

NIST mentions this steel from WTC 7 and a similarly corroded piece of steel from the Twin Towers, in NCSTAR 1-3C, pp. 229–233. However, NIST performed no analysis of the steel sample from WTC 7, and NIST's conclusion on the sample from the Twin Towers was that it was “unlikely that [the] column experienced degradation prior to the collapse of the towers.” However, NIST's reasoning for both of these decisions appears fallacy-ridden, as its analysis provided little support for the idea that the samples were corroded post-collapse. (See reference viii by Andrea Dreger, pp. 50–53)

Quoted from: Firefighters for 9-11 Truth - 9.3.6 Spoliation of Evidence - NFPA Contradictions